Take the awesome spinoff levels from Super Mario 3D World, and expand on the idea. This is the concept for Captain Toad: Treasure Tracker. END_OF_DOCUMENT_TOKEN_TO_BE_REPLACED

While you might think this is just another Mario game, think twice. Once you experience the wonders of Super Mario 3D World, your eyes will be opened.  Mario has befriended us for quite a while now but somehow Nintendo keeps reinventing him into something crafty and great.  3D World hits us deep at our fandom core and pulls out all the stops to deliver one of the greatest Mario titles yet.  Below we take a look at not only what makes 3D World such a great title but a slight insight of what is to come on the next-gen consoles when it comes to Mario.

Every level of this platform title has been thought out to the greatest extent, whether you are going through clear tubes inside the walls, meeting new and amazing enemies, or turning into our most favorite item to date, feline mario, there is no end to the joy in store for the player at every turn.  Shadows and silhouettes guide us to hidden spaces and items, one level has us surfing on the back of a loch ness monster, all while keeping a multi-character dynamic of using Mario, Peach, Luigi, or Toadstool as your playable character.

We can’t talk about this game without going into more detail on the cat suit.  This amazing new items lets you fly into the air with a swift dash attack, swipe your enemies with a fierce cat claw, and climb walls to hidden and challenging destinations.  Sometimes the cat suit is necessary to get to new locations and solve the puzzles to progress through the game.  It answers a lot of the questions that we had before the release of the title on how they would reinvent Mario.  By letting us branch out into the extremities of a level the player can find themselves deeply enveloped in completing a number of intricate tasks.  While many of the levels have a focus on the cat suit we are fortunate that this isn’t the only lovely thing about the title. 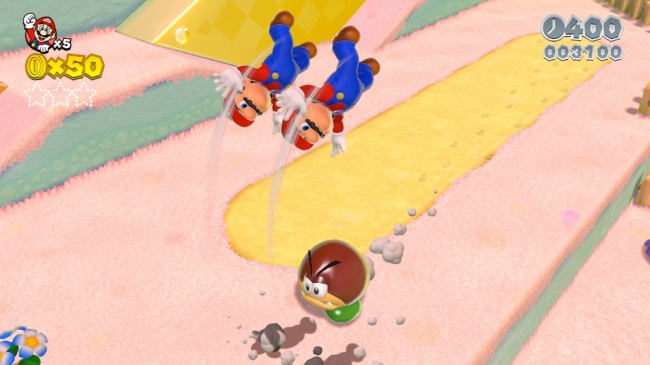 The top-down world map also has a new feel.  Instead of being on a linear path the entire time, the map is interactive and free roaming allowing the player to travel from level to level in any manner they choose.  This gives Nintendo another chance for reinvention by allowing the player to find enticing secrets hidden directly on the map and not just unlockable from inside the levels themselves.  Some of these puzzles remind me of the only thing I loved about Super Mario Sunshine, the hidden puzzle levels.

On top of all the amazing new design features this title is hands down beautiful.  Even in the most novice beginner levels the visual aspects of the hypersensitive colorful Mario world is brought to life by the power of the Wii U.  I was amazed first walking into a level that seems to be themed from a circus setting,  the foreground and background was constantly in motion.  Movement of the level and lighting doesn’t get any better than this.  A level of gold catches the gleam of the lighting, rainbow LED swings, and of course Bowser with his usual visuals of lava and fire are top-notch in the title.

It’s only out of pure habit that I mention the controls at this point.  The precision and effortlessness with which the title handles is incredible.  Not a single moment did I feel that the controls glitched or didn’t work to the best of their ability.  Nintendo has perfected 3D Mario controls to a fine art and should be commended for this.  No other platformer has had quiet this ease of control.

Co-op becomes even more intriguing in this title than it has in the past due to the new line-up of playable character attributes that integrate slightly differently than before.  Mario of course is the average running and jumping player, Luigi jumps higher and falls slower,  Peach runs slower but can jump and float through the air for several seconds, Toad runs fastest and falls faster but is the slowest runner, and we won’t spoil it for you but there is an unlockable fifth playable character.  Up to five players can co-op with one using the Wii U remote to manipulate the environment.

Mario has had the unfortunate negative of often being labeled as a “kids game” throughout the years.  Somehow he has barged through as a character that can transcend gender, age, and maturity to bring us back to the wondrous years we remember from our past.  Super Mario 3D World is the pinnacle of platforming titles and will not be easily outmatched.  From the beginning to the end this title gives us new challenges, secrets, and a level of difficulty that is hard to match in this genre.  Being able to play as an array of characters adds even more life to the title, and the visuals and sound are out of this world.

+Controls are spot on

+Visuals and audio don’t get any better 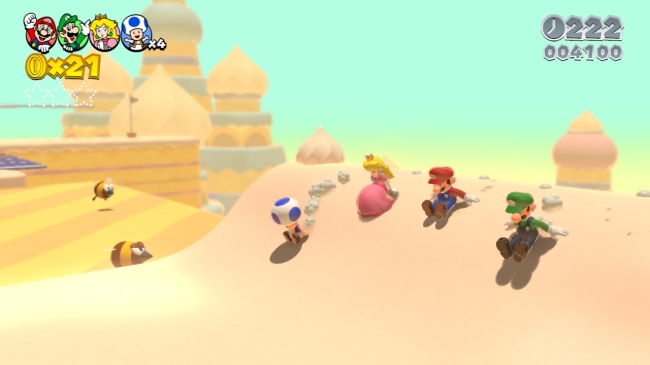