Nintendo Switch was revealed.  We have the current info you need.  I’m excited to play, but there are still unanswered questions.  Splatoon and Mario Kart 8 were shown in the montage video, but have yet to be confirmed as Switch titles.  So What games exactly will Switch have at launch? END_OF_DOCUMENT_TOKEN_TO_BE_REPLACED

C-Mack here with updating everyone on an exciting event that yours truly (and by connection Play Legit, because one of us reps all of us) was involved in at my day job about a month back.

When I’m not helping generate Real Talk for KJ and the crew, I currently work at Mid-Ohio Food Bank, the largest non-profit food relief organization in the state of Ohio, helping volunteers pack food that goes to shelters and pantries in up to 20 different counties. END_OF_DOCUMENT_TOKEN_TO_BE_REPLACED

This year’s ballot is Nintendo-heavy indeed. Will that be the deciding factor? Which game will come out on top? The time has come. END_OF_DOCUMENT_TOKEN_TO_BE_REPLACED

Watch as I try getting first place in mirror mode. Trying is the key word. Also trying not to swear. Ha enjoy! END_OF_DOCUMENT_TOKEN_TO_BE_REPLACED

This summer lineup has been quite possibly the slimmest in years (if we’re talking about major releases). What is a man to do? Well, I play what is available of course. Here is a list of titles that came right before or during summer, that have helped me maintain. END_OF_DOCUMENT_TOKEN_TO_BE_REPLACED 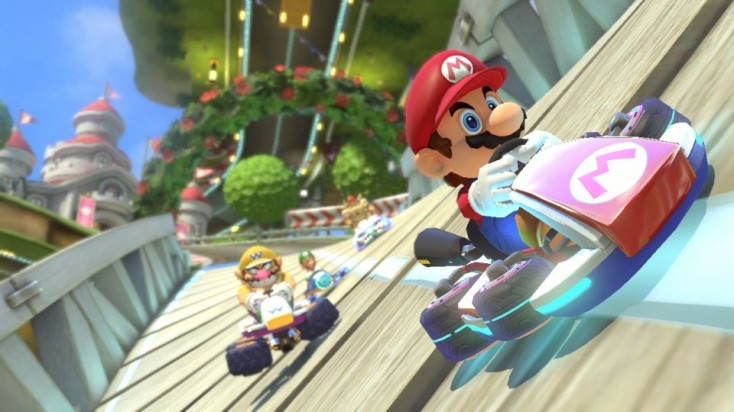 With the release of Mario Kart 8 to Nintendo’s Wii U console recently it got me thinking. What are the pros and cons of communicating during an online experience END_OF_DOCUMENT_TOKEN_TO_BE_REPLACED 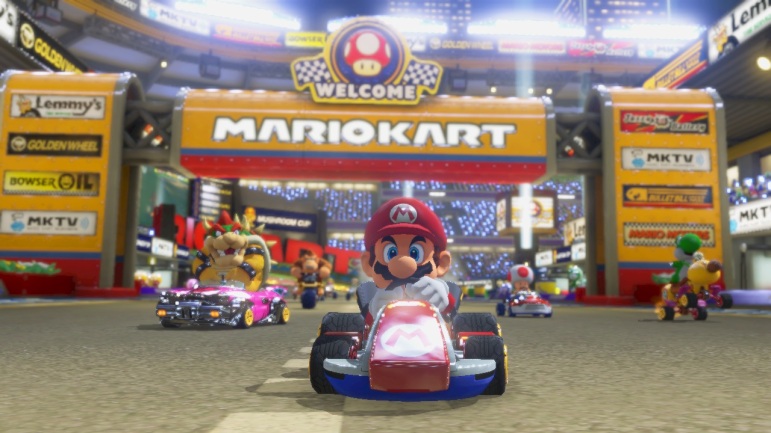 Mario Kart is a well-known franchise spanning across many years and multiple systems.  This 8th installment takes Nintendo’s beloved series to new heights with incredible visuals, all the things we love about the classics, and a new twist, literally, to the tracks.  It seems hard to believe that any game beyond its third version could succeed the way Mario Kart has. There’s a formula that seems to work and I truly enjoyed every minute of it.

I can’t say enough about the visuals of this title.  Lighting, manipulation, and graphical prowess are on par with anything to date on the new generation of systems.  Nintendo is definitely giving Playstation, and Xbox a run for their money with this one.  With the title being as fast paced as it is, one might think little needed to go into the animation and graphical consideration of the tracks, but Nintendo goes all out.  The tracks are constantly  moving and teaming with life.  Objects jump into your way, laser lights scream at you from the side lines, and if you catch the track at the right moment you’ll catch details in the background that are sure to surprise.  At one point I looked up and fireworks in the shape of Bowser were going off, or Peaty Piranha was dancing to the music.

To add even more appeal Mario Kart 8 brings us highlight reels after the race, which can be edited, fast-forwarded, rewound, and slowed down by the player.  What might seem like a simple green shell throw turns into a vast array of action during slow down.  The shell crashed into another player sending sparks flying through the air just as your own player bounces out of his seat, fist high in the air in celebration of victory in the moment. With each sequence of the race many of these replay reels can be enjoyed.  Mario Kart TV, another added feature of the game, lets us watch replays of other friends, regional, or worldwide players, and encourages players to post to their youtube channel right from the game. 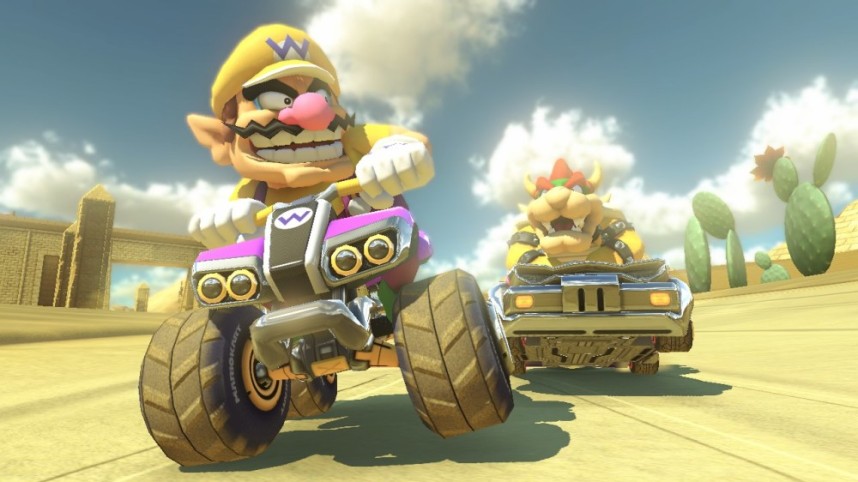 Mario Kart has always been a fast paced title, but this time it’s even more smooth and on point. When players go flying of the track Lakitu makes sure to bring them back quicker than before.  The menu system makes it easy to get started into a race as soon as possible, online or off.  Item rotation happens faster, letting the player decide their strategy in a much more quick way.  It’s all been fine tuned for the perfect racing free for all, and it works like a charm.

New items have been added in the mix as well.  Super horn lets you stop blue shells or just get close competitors off your back, Peaty Piranha hitches a ride sending you into boost mode and chomping at players or distasteful items you pass. Boomerang Flower allows players to throw a boomerang at opponents in front of them up to three times. Last and most epic, Crazy 8 which lets the player surround themselves with eight different items that can be use in random succession in a whirlwind of item madness.  Item usage is an essential part of the game, and is thankfully quite well-balanced making from an even better experience.

Also new to the series is the idea of anti-gravity mode.  During certain portions of the track, players wheels turn into hovers letting the rider float ever-so-slightly off the ground.  While in this mode, bumping into other players delivers a speed boost.  Part of the challenge is finding the perfect angle to bump into them as to not send yourself flying off the track, while still being the only player to benefit from the bump.  This new mechanic could have been a catastrophe for Nintendo, but like all other aspects of the title, is perfectly executed, and excellent for more strategic players. 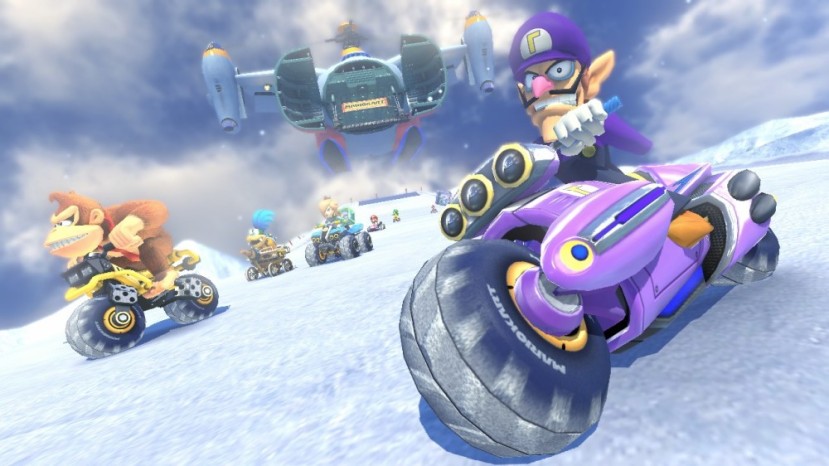 Between anti-gravity mode bumping, boost pads, item boxes, drifting, kart customization, and track layout.  There is not end to the potential a player has to get ahead.  The game does a great job of doing this without the feeling of overuse, or being unbalanced.  Shortcuts during the tracks are helpful but can be risky.  If you’re an expert it might be a much more simple choice, but one false move could take you from 1st to 8th, forcing the player to weigh the risk over benefit.

Online play adds even more fun, single and two player split screen online, battle or race, and every option in between leaves no player behind.  It’s easy to set up tournaments or jump online with friends, and the game runs at 60 fps without a hiccup during the online races.  While speaking with friends over mic is a nice option, I wish it wasn’t just restricted to friends.  A small trivial detail when the title is this good.

Overall perfect balance and the incredible fast pace, along with multiplayer on and offline leave only the most trivial things to be desired in this title.  This is a must own for any Wii U owner or Nintendo fan, and a system seller for those that have missed the band wagon on how amazing the Wii U system is.  Beautiful rendering and eccentric music create an atmosphere that is unforgettable. It’s a title with extreme replay value that sucks the player in. I won’t be setting this title down for quite some time. See you online!

+New items that are fun and balanced

+Fast paced gameplay that is fair for all players

-Can’t talk to all online players, only friends in the lobby

May 2014 was a crucial month for comic book fans. Mario Kart came through in the clutch, and a monster movie legend returned. Take one last look back. END_OF_DOCUMENT_TOKEN_TO_BE_REPLACED

Get a good look at MK8’s version of Rainbow Road and other tracks. END_OF_DOCUMENT_TOKEN_TO_BE_REPLACED