Netflix has been buzzing since the end of 2019 with the popular adaption of “The Witcher” franchise into an 8-episode live-action drama starting the DCEU’s Superman: Henry Cavill as lead monster-hunter Geralt of Rivia. The Witcher franchise is well-known to gamers and literature fans, with the books dating back to the first novel written by Polish author Andrzej Sapkowski in 1993, and the PC and console-based games dating back to 2007.

I’ll be upfront: I’ve never played a single Witcher game or dabbled with any of the source material, but knew of the character and franchise before the show. That said, I went in as a total newbie to the world of The Witcher and can only speak about the story and franchise from what was presented in the 8-episode show. As an avid Marvel Comics fan, I know how it feels to love the adaptation, but know that there’s just so much more to it that usually gets left out for a number of reasons, and to know that adaptations are not, if rarely, the whole picture about any franchise or fandom.  The Witcher is a fan fantasy drama with a talented cast, decent special effects, satisfying medieval combat-based fight scenes, some interesting creature and monster effects, and a confusing timeline filled with families, nations, and cultures that are difficult for a non-fan to keep track of.

I admittedly don’t digest a ton of traditional swords-shield-and magic fantasy, so it’s hard if not impossible for me to watch something like this and not compare it to Peter Jackson’s epic Lord of the Rings, and I know that’s not fair. This is a TV show, so next I glance to something like the very popular Game of Thrones, and The Witcher has some content that’s more satisfying than Game of Thrones, but in some ways, it falls short
in comparison. I’m comparing the two because I believe in judging something based on measuring it up against other works that are similar in style, tone, and content.
Game of Thrones offers a bleak world without much hope or positivity in any sense, where almost every character is conniving, corrupt, and vicious in some ways, and often left me wanting a central character who wasn’t a total scum bucket as a way to anchor me in the world and balance what happens, and you get that from Henry Cavill’s gruff performance as Geralt. It’s fun to see a character who acts like a cop or soldier who’s seen-it-all and done-it-all, except in a world full of magic and wonder. GoT also has a very complicated political structure that draws from the tradition of Shakespeare’s plays that featured court intrigue and drama between bloodlines, and GoT succeeded in
slowly introducing how each nation differed from the others, what their strengths and weaknesses were, and why they would want to invade, stay away from conflict, or try to trade and stay neutral.

There were only a few important families introduced, and each had a symbol and phrase associated with it so you could remember which family was which. Maybe Witcher wanted to stray away from introducing the lands of the show in this way to avoid
the comparisons with a show that has a much higher budget and at this point, a much larger following, but at times The Witcher can be a bit dense in how much information about its fictional world it throws at you.

Timelines will shift between past and present all in the span of a few scenes in the single
episode, with no text or indicator to show you this. I’m all for not spoon-feeding the audience information about the story and using context and dialogue to illustrate a world, but when you’re introducing characters and a new setting all at once, along with concepts that might be new to some viewers, some small indications might have been helpful. The fact that the official series Twitter along with several other sites have released a downloadable series timeline map shows that this aspect of the show has left more than a few people scratching their heads about *when* things are happening in the
story.

Performance wise, the best part about The Witcher are series leads Henry Cavill as Geralt and Anya Chalotra as Yennefer, the series sorceress, along with an upbeat and musically gifted supporting role from Joey Batey as Jaskier the Bard, who sings songs (one of which has gone low-key viral) about everything he encounters, because in their time period they can’t take out their phones and get footage of everything cool that happens and upload it to the fantasy equivalent of World Star Hip-Hop. Henry Cavill shows here that he’s capable of more than being random goons or the clean-cut Man of Steel. Geralt is ruthless, regretful, sarcastic, tough as nails, but also is capable of friendship and loyalty under the right circumstances. Yennefer is a crafty, powerful sorceress who is as likely to work with Geralt as she is to work against him if the situation suits her, and Chalotra does a solid job making Yennefer into a character that feels developed when she could’ve been very one-note.  The show is at its best when it features Geralt and his gang dealing with the monster-of-the week,because at it’s core, I felt like that’s what The Witcher really is, and the concept that witchers are basically exterminators for magical fantasy beasts that are pestering your village lends itself to that.

When The Witcher tries to reach for the royal-drama and medieval politics of other fantasy works, it falls short. The budget and cast just aren’t there to justify some of the time spent on the non-monster slaying content, and often feels like filler that could’ve been spent developing the core characters more, as well as showing them in the midst of even more dangerous adventures. Some of the large-scale battle scenes seem more empty and less visually full than they should, whereas the tight, compact confrontations The Witcher will have with bloodthirsty bandits, dragon poachers (you read that right), or a disgusting monster are all visually solid and lots of fun.

The aspect of the series with Princess Ciri on the run after her kingdom gets leveled really starts to slow the show down towards the end of the 8-episode run, and it seems like there’s an endless amount of scenes of this child running through the woods in a panic. The goal is for Geralt to find and protect her as they’re destined to accomplish great things, but that goal isn’t as present throughout the series as, let’s say the goal to get the One Ring to Rule Them All destroyed, so the series has a wandering, unfocused feel to it at times. It honestly left me wondering that if they had just skipped a larger plot in
favor of a wandering adventure that it might have turned out a little better. That major quest that draws everyone together just isn’t as strong in the series, but could be developed more in season 2.

None of this is to say The Witcher isn’t watchable. The sense of humor shown is a welcome addition to fantasy worlds, without slowing it down or removing the sense of action or urgency from it either. It reminds me of a modern take on an 80s swashbuckling fantasy movie in a good way, and I could easily see a full fledged movie adaptation of this series being really fun if Netflix ends up wanting to go that route. 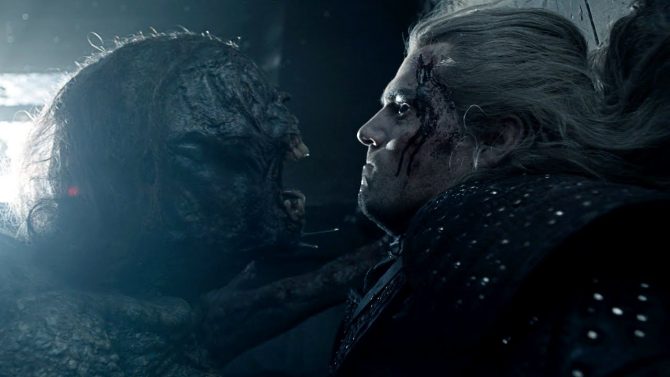 You can really tell that there’s a much larger world that isn’t being shown in The Witcher that is probably very fleshed out and real in the books. The challenge for the next season should be to slim down what material they want to adapt, make it streamlined, and focus more on the engaging cast and characters, as well as putting more budget into some truly disgusting monsters for them to face off against. Once this show knows exactly what it wants to be and leans into and focuses just on that, it could really rise above fun evening viewing into must-see-streaming. For having some solid sword and song-slinging, I give The Witcher on Netflix a bloody good 3 MF’s out of 5. Toss a coin to your reviewer.