Hollywood has been trying to cozy up to video games ever since studio big-shots realized there was money to be made from making large-scale productions of the at-the-time new medium of entertainment. Those of us who’ve been around long enough know how this usually goes, and what the track record of successes versus failures are with video games on the silver screen.

Just this past week, Paramount unleashed upon the world the latest franchise to make it’s move to theatres, kind of like a sick cat coughing up an itchy, poorly formed blue furball: Sonic the Hedgehog. I notice that a lot of 90’s franchises are particularly at-risk for having movies made of them, just look at the rap sheet: Street Fighter, Double Dragon, Alone in the Dark, Prince of Persia, and more have all joined the ranks of hilariously bad to shamefully, embarrassingly bad big screen bombs. I think the reason for this is because at this point, many of the gamers who were around for 80s and 90s franchises are now old enough to have kids, or have enough nostalgia backed up in their brains that big studios see a potential payday, and are now comfortable green-lighting video game projects that would’ve stayed in the crypt in the past.

So this is just a reaction from the trailer, and yeah, maybe the full-length movie will turn out to be much better than the trailer makes it look, but the first impression wasn’t great. At all. Many of us were ready to level hate at the finished product after the disturbing design that was leaked last year, but I wanted to hold out judgement until we had something to really chew on. I chewed it and spat it out.

Sure, Sonic’s design is awful, but the choice to set it apparently in modern day, complete with Sonic getting the attention of police, The Pentagon, and who-knows-else, as well as working with an-all human cast to defeat a very unfamiliar-looking Jim Ca-err…Doctor Robotni…err, Eggman (?), “played” by Jim Carrey. I’m a huge Carrey fan, and I assume he was cast because like Sonic, his biggest heyday was in the 90s. I’m not saying that even after all he’s been through that Jim can’t be funny or has lost his edge, but even from the trailer you can see that after his absence from movies, this wasn’t exactly the one where he tried anything new or brought his, well even his C or D game to the table. I could see Jim crafting an amazing Robotnik with the right makeup and costuming actually, which is why it’s a shame that he’s clearly doing a paycheck-performance here. Just from the trailer alone, he doesn’t come across as the raging, overly-serious, meglomaniacal dictator Robotnik from the games and CBS cartoon was, but more of a quirky, under-appreciated, misunderstood scientist with a smart-ass streak, closer to what he did as The Riddler from Batman Forever (speaking of 90’s throwbacks). 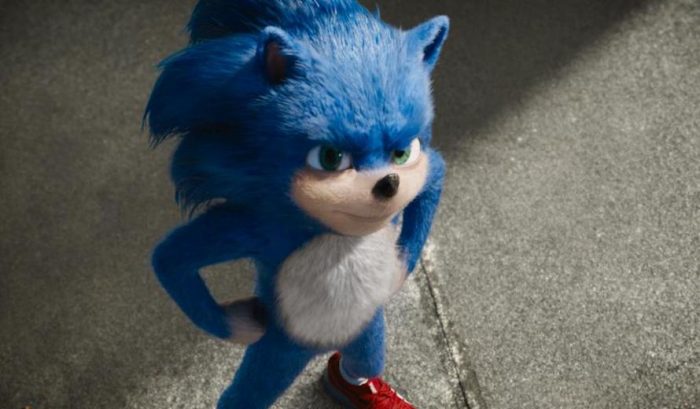 Sure, don’t judge a book by its cover, but we’ve got a poorly designed main character in a setting that ignores multiple versions of the canon (comics, cartoons, and games), and places him in a plot where it appears he’s being hunted by the military and authority figures, while secretly trying to save the day and stay hidden from exposure to the world-at-large. Yep, never seen that formula before. It frustrates me that in order to save money that they opted for a live-action set world, instead of a fully animated movie of his adventures on Planet Mobius with the crew led by Princess Sally Acorn (that’s just one version of the Sonic lore, but it’s one close to me and has an actual storyline). They’re trying to borrow the vibe from The Transformers movies, the only difference being that in the source material, The Autobots *did* work with Sam Witwicky and the military, so the movies weren’t fabricating that out of nowhere. The Sonic franchise has had a lot of problems even outside of adaptations that they’re only just now fixing with titles that bring it away from the disturbing new direction the series took, with entries like Sonic Mania. The trailer is cut poorly with bad puns and predictable-looking scenes, along with “Gangsta’s Paradise” from Coolio. The Sonic games have some excellent music in them, and a score that took cues from that could be amazing. Swapping the colorful, visually varied and exciting world of the games with dull stretches of Midwestern asphalt and generic skyscrapers was one of the worst possible moves they could’ve made with this joint. It irks me even more that an entire generation of younger kids will be introduced to Sonic this way, and not have a genuine impression of his world or storyline at all. At worst it could even turn kids off from Sonic, and have them thinking this is what represents him. Say a prayer for my favorite blue hedgehog, folks, it ain’t looking good.