The second season to Castlevania on Netflix dropped this past October, and I’ve got
around to checking it out.  I reviewed the first micro-season here (toss in review link here) and after making it through 2018, I’m back to finish the job I started in the summer of 2017.

Just to get the basics out-of-the-way again, Castlevania on Netflix is loosely based off of
Castlevania 3 on the NES, which in terms of the series timeline, is set before most of the other games, and chronologically comes first, or close to it, in terms of the series as a whole.  Comic book creator Warren Ellis (Transmetropolitan, Red, Astonishing X-Men) and Powerhouse Animation have teamed up to bring the classic game series to life in the Netflix original.

In my review of the first season, you’ll note that I was frustrated with it even being called
a season at all, because it was 4 episodes, and 2 of those had what was mostly filler. This
season still only clocks in at 8 episodes, so both seasons really only equal the length of an
average T.V. season. I don’t know what kind of production issues Castlevania had, but I still think that they should’ve waited, and released all the episodes together at once. So while we’re talking about filler and pacing, which was something I hoped would improve back with the first four episodes, I regret to say that it’s still an issue with part 2, and the story doesn’t quite move along as fast as it should.

What works for Castlevania is the voice-acting and fight scenes. Those both delivered in
the first season, and that hasn’t changed at all in the second. Whenever conflict does jump off in the show, the animation of even the smallest or most simple battles looks top-notch, with the moves and techniques that the characters use being inspired directly from the games.

The voice performances, for the most part, are all solid, with several new characters being introduced who’s actors all do a great job delivering what they’re given. Scottish actor Graham MacTavish, when he gets the chance, really sinks his fangs into his performance as Dracula, and has some moments to express what remains of the vampire’s emotional side also. Overall, the lead cast has some great chemistry with each other and it shows that they really understand their parts.

While we’re talking about the voice acting though, I mentioned this quirk in season 1, but I again have to point out that there were times that I had to rewind a scene and grab the remote, and turn up the volume to hear some of the lines from the characters. I get that they’re going for a casual, realistic delivery of the dialog, but whether it was sound levels or the director not telling the actors to speak up and pronounce things, it shouldn’t be so casual that it leaves you scratching your head trying to figure out the meaning of the words that the last character who spoke muttered. You could make the argument that I should’ve gone for the closed-captioning (I can’t remember if I tried or not), but this isn’t usually an issue with other anime or shows I watch, so until I notice my hearing going bad in everyday life also, this one’s on you, Castlevania.

What doesn’t work for the second season, like I mentioned before, is the pace. For example, the main characters: Trevor Belmont, Sypha the Sorceress, and Alucard, Son of Dracula, spend what seems like 3 whole episodes rooting around in the Belmont family keep for information on how to tackle Dracula and his undead horde. This is important for the story and the characters, but the second season barely spends much time with the leads, cutting back every now and then to them staying in the same place. It felt like what they accomplished in the keep could’ve happened in one episode.

Something else that didn’t quite work for me was how Dracula spends most of the season
posted up in his study, watching the crap out of the fire in front of him (it’s nice that the lord of the dark in this version has fire-magic spells, so he doesn’t have to keep lighting it with a Bic-handy lighter or match, although *someone* is hooking homeboy up with heaps of firewood. 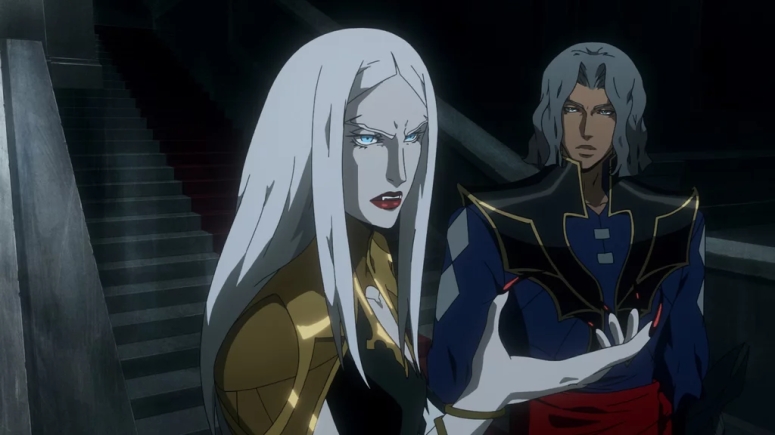 I guess when you work for the Big Drac, you have a lot of motivation to do your job). I
understand that in the games, Dracula usually lets all of his minions do his dirty-work for him, he’s a string-puller and strategist, and doesn’t get his hands dirty until he needs, or wants to.  All of that is fine, but since he’s the main villain and you have 8 episodes, the cuts back to him being sulking, sullen, depressed, and talking about how he doesn’t really care about what’s happening with the details of his own evil plan didn’t quite sit right with me. Not everything that works in the games works in a different format, that’s the point of adaptations.

If he can’t get excited about destroying humanity, why should I be? There was a different way to communicate that he’s tired and over the drama that comes with having a whole court of vampires without dragging down the pace of the show with it.  Dracula gets so little to do in this season aside from flashbacks that when the trio finally defeats
him in the last 2 episodes (which is set-up by a scene of the main characters dicing through all of his vampire generals, set to the track ‘Bloody Tears’ from the games, and is the best moment of the entire series), I almost felt bad for him.

When I look back on the entire series, there’s a lot I like about it, and it’s gotten me excited about returning to some of the Castlevania classics. Castlevania was made in the US with a staff that included creators who have worked on Japanese anime, but I would have to say that while they’ve cribbed elements like slick fight scenes, beautiful art and designs, and a good atmosphere from anime, they took some of the worst elements too: padding, filler, and whole episodes devoted to one conversation or choice that could’ve been solved in one.

I think Castlevania could’ve benefited from the show-runners choosing to deliver the story in a series of three 1-hour segments, instead of the 12, 22 or-so minute episodes they went with. This would’ve kept the story moving and allowed the budget to be saved for more of the incredible fight and action sequences.

As it stands, despite the flaws I mentioned here, it still has its own charm, and the franchise offers a ton of source material for them to adapt. With a few tweaks and adjustments, the Castlevania anime could really rise out of the crypt and take its place among the greats.  For now, I give Season 2 a blood-soaked 2.5 MFs out of 5. Make sure you suck in the right way, Big Drac.