In just a couple weeks Fallout 76 will be out in the wild and this past weekend I got the opportunity to try out the Beta for myself. There’s a lot of questions surrounding an online Fallout and how far it will deviate from what makes the series so popular. While Bethesda has an online Elder Scrolls, there’s a number of features about Fallout that may not translate as well. Namely, how accurate can the shooting be with lag? Will the V.A.T.S. system make any sense in a game that cannot pause? How is it supposed to be a Fallout game with no NPC’s or dialogue options? Ultimately, does Fallout benefit from having multiplayer, or is it just a running list of compromises that slowly deflates the integrity of the brand?

The most important thing I found was to just be open to the experience and not expect ‘Fallout 5’. If you go in with a list of demands, a ‘Fallout must have this, this, this and this or it is not Fallout’ way of thinking, you’ll most likely bounce out real quick and go back to waiting for the next proper single-player Bethesda game. If your favorite element of Fallout is dialogue, well, Fallout 4 with it’s reduced dialogue options probably already turned you off. Frankly, if you love exploring, shooting and looting in the Fallout world, you’ll feel at home. The V.A.T.S. aiming system is now done in real-time, and while not as cinematic as it once was, in chaotic moments it does help you get good shots off. When you’re not blasting radiated creatures, in classic Fallout fashion you will read plenty amusing computer entries, listen to countless audio logs and stumble into all kinds of crazy stories out in the world. 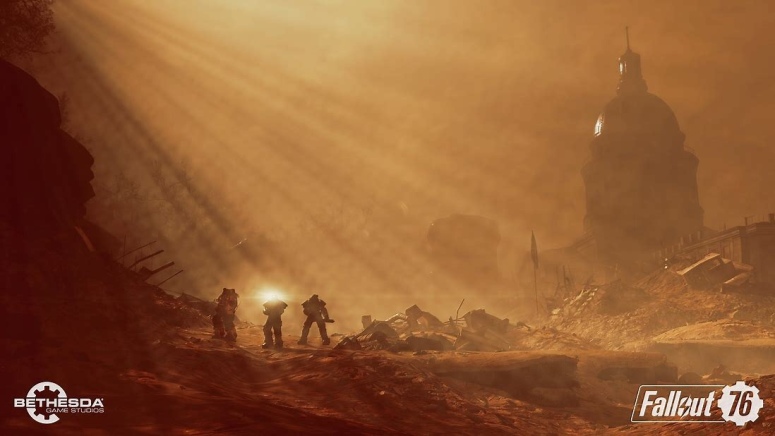 Bethesda rewards you with pretty much every action you make, and encourages experimentation with different game systems. The perk system is card based and different than before, the base building is more mobile and flexible, and the crafting is heavily expanded and more important than ever. All of these things you engage with in the first couple hours and Bethesda paces it naturally. Soon enough I was already planning my next perk upgrades, setting my sites on a location on the map, trading with other players and participating in group events. For a game that has a lot going on, the experience of playing it was very immediate and gratifying. My favorite moment was stumbling into a building with two strangers, and we had to eliminate all the robots. When we took out the last one, we all got experience points and some nice loot, and then decided to go our own ways.

It feels as if you could largely play Fallout 76 as a single-player game and still pepper that experience with these moments throughout the game world where you inevitably encounter and have to team up with other players to complete some tasks. It’s enough player interaction to feel significant, but not so much where you feel like playing by yourself is a lesser experience— in fact it feels perfectly blended into the fold. You have the ability to trade, emote and of course party up with those you encounter and once you reach level 5 PVP unlocks. While I didn’t get the chance to do any PVP it seems as though the only penalty for death is losing your ‘junk’ items, which are what you break down and use for crafting. It could be annoying, but mostly harmless, and that seems appropriate. 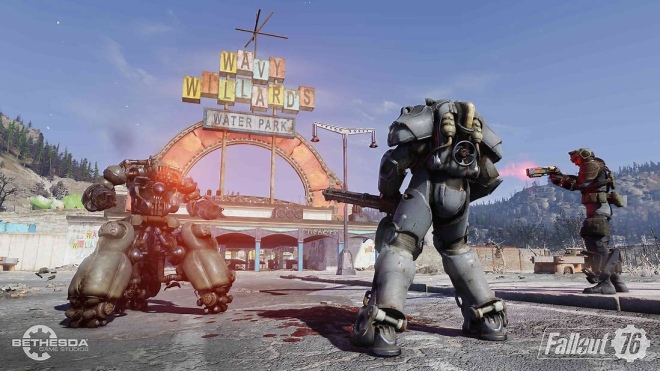 I encountered a host of glitches, bugs and moments of severe performance issues. Enemies that slide around without animating, dead bodies that you can’t loot, lighting disappearing, the frame rate plummeting into the single digits, menu screens lagging out and sound disappearing. It’s in very, very rough shape. That being said, I didn’t notice much lag and these rough edges didn’t stop me from being enthralled in the game world. The colorful fall West Virgina hills made this game world feel distinct and beautiful, and the radio on your Pip-Boy made the atmosphere drip with personality in a way only Fallout can. While it’s increasingly more and more outrageous that these bugs continue to exist in each iteration of Bethesda’s games, to denounce the entirety of the experience over them would be to deny yourself the truth that it’s still fun to play regardless. Whether or not an online Fallout game is something that is for you may vary, but if the premise is intriguing you’ll likely want to keep your eye on this one.