Finally, after much delay and anticipation, Nintendo has a Souls game on their platform. Seeing the FROM SOFTWARE logo appear on the Switch screen just reminds me of how far Nintendo has come in the last few years. While the PS3 and Xbox 360 were getting generational multiplatform classics like Dark Souls, Skyrim, and Grand Theft Auto V, the Wii and Wii U sat on the sidelines trying to offer ‘new’ ways to play. Being a Nintendo fan during the those days wasn’t easy— you’d get the occasional high-quality Nintendo game, but man wouldn’t it be awesome to play Dark Souls on the Wii U Tablet?! Alas, those dreams were just that, dreams and not reality. Now, here we are, in 2018, and Nintendo has turned the ship around and developed a technically competent console that can handle huge games in portable form. Enter Dark Souls, one of the most influential games of the past decade, now in ‘Remastered’ form (more on that in a bit) available to play anywhere you want.

Just like Breath of the Wild was immensely impressive to play in portable mode on the Switch’s LCD display, Dark Souls proves that you can continue to feel that joy, even now, well into the second year of the Switch’s life. I grew up during the NES and SNES days and I remember Nintendo being resistant to any kind of violence on their platform, even removing blood from Mortal Kombat 1 regardless of what the fans wanted. Nintendo’s insistence on their platform being appropriate for the whole family both helped their rise to success but also limited their trajectory. Seeing the menacing, oppressive Dark Souls intro video play, with dissonant orchestral strings and a sad, existential narration, makes me in awe that Nintendo found a way to meet everyone in the middle without compromising their integrity. Everything feels like it’s coming together for Switch and Nintendo in 2018, and Dark Souls arriving symbolizes this.

Along with rampant indie developer support, Nintendo is reeling in huge third party games like Wolfenstein 2, Doom, Skyrim, Diablo 3, Fortnite, L.A. Noire, and Dark Souls: Remastered is the latest in that line. But how does it play? How compromised is it in comparison to the PS4 and Xbox One versions? Well, the most important thing here is that if you wanted a Souls game to play on the go, this will meet those expectations. If you wanted new textures, improved lighting and a 60fps frame rate, the Switch version will not meet those expectations. That is what the PS4 and Xbox One are for as they provide the highest fidelity version possible on console. The Switch is all about getting Dark Souls to run great, look great and feel great on the go. The ‘Remaster’ for Switch owners is more about some quality of life improvements in the menus, dedicated servers for 6-player online, higher resolution (720p in handheld, 1080p in docked) and a steady 30fps. If you played Dark Souls back on PS3 or Xbox 360, you’ll remember the game barely hit 720p and in certain areas would drop frames down into the single digits.

So, while the Switch version appears more like last generation’s Dark Souls, it does still provide a clearer image quality and steady frame rate with very infrequent drops, and these things make the experience much more enjoyable in 2018. The biggest problem with the Switch port is the audio quality. This is one of the most bizarre issues I’ve ever seen with a game release. For whatever reason, all of the sound effects, voices and music have been heavily compressed and sound very lo-fi in comparison to any other version of the game. This is maddening because Souls relies so much on sound for atmosphere, and while there isn’t a lot of music in the game, when it kicks in it is very impactful. The current speculation on why this is the case is that the game needed to come in under 4gb to fit on a smaller cartridge (it’s about 8gb on PS4 and Xbox One). Nintendo offers a variety of carts and the bigger they are the more expensive to publish on. If this is the case, I understand that thinking completely, as it could be a way to offset the additional development time for the Switch version, but please, for the love of my ears, release an optional HD audio DLC. 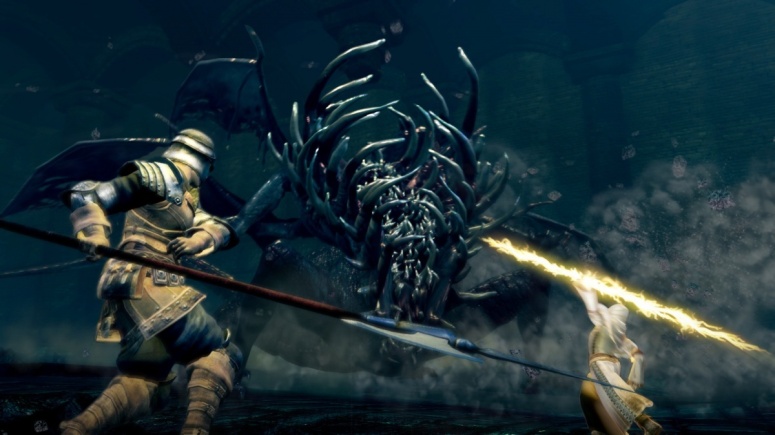 I was very worried that the audio would ruin the experience for me, but in reality it doesn’t. I will say, though, it is much more noticeable in docked mode or in headphones, so if you’re playing primarily in portable mode, you may not notice that much. After playing for several hours, the gameplay and world design fully grips you and any qualms you have with the audio become just a nagging disappointment than anything game-breaking. Still, I would like this issue to be formally addressed and resolved because if the audio was of the same quality of the other versions this Switch port would be near perfection. There is no actual technical limitation for why the game sounds like this. This feels a lot like running a marathon, closing in on first, then stopping just short of the finish line and letting others pass you. Why go through all this effort to get Dark Souls optimized on Switch, delay the game all summer, and then release it sounding THIS bad?

One big surprise for me was finding out how well Dark Souls works as a portable game with smaller play sessions. Infamous for the inability to pause, Dark Souls on switch breaks from this design if you put the system to sleep (but it will not pause if you simply just go to the home screen). So, technically, at anytime, you can put the Switch to sleep and go about your day. I have found that because I don’t need to dedicate hours in front of my TV to play, I have been breaking up my goals to more reasonable tasks: Get to one more bonfire, grind on these guys for a bit to level up, find the next shortcut, explore the new area a bit. The controls work effortlessly on the Switch too, with the Joy Cons not detracting from the epic boss battles or invasions. The only absolutely bizarre decision here was to make B confirm and A back out in menus. It’s counter-intuitive to every other game on a Nintendo platform, and while it keeps it in line with the other versions, it is near impossible to get straight while playing on the Switch. If you can somehow pretend you’re playing with a dual shock controller, maybe you can get it. Please allow us to switch these buttons as everything else in the game is able to re-mapped!

Dark Souls feels fresh on the Switch and what’s more impressive than running around in 4K is the portability this version brings. Portability is the most liberating new element brought by this ‘Remaster’ and actually deepens the flexibility of playing it. At $40, this classic is an essential purchase on the Switch for any Souls fan, and for anyone who has yet to experience it before. Don’t worry about getting a ‘worse’ version than other consoles, this game looks and plays great in its current state on Switch and you won’t be left wanting more. The freedom that the portability brings makes replaying Dark Souls feel new again and allows you to fit in time to play whenever convenient. While audio issues are totally inexcusable, it doesn’t ruin the experience of playing Souls on Nintendo’s platform. Hopefully it will be addressed, and if it does, I would consider re-evaluating this review to reflect that. If you have any passing interest in Dark Souls and own a Nintendo Switch, get this version of the game.

+Translates perfectly as a portable game, ability to pause

-The delay over the summer was for what?

-The audio is severely compressed and takes away from the atmosphere