Octopath Traveler is a delightful game that brings together classic JRPG gameplay with stunning storybook visuals. Unfortunately, Octopath falls into the many pitfalls that plague the JRPG genre, but still manages to tell eight stories in a beautiful world.

The first thing players will notice is Octopath’s unique scenery and characters.  16-bit sprites roam around a 3D world, lit by modern lighting effects. The sun glints off the sea as the water rolls in the wind, the forests are shrouded in darkness, beams of light break through cave walls, and the snowy northern plains are obscured by frigid winds.  This surreal mix of styles makes Octopath feel less like a retro-style game and more like an interactive pop-up book. Aside from the scenery, the pixel art is beautiful as well. Boss enemies in particular are heavily stylized and imposing, making simple story encounters seem much more impactful and dangerous. The music also adds to the fantastical style. The complex soundtrack is filled with titles that evoke emotion from every scene, further bringing you into the fictional world.

The combat is where Octopath truly shines. The layout is familiar: Four characters line up against a line of enemies, and each takes turns attacking, using abilities, and casting spells. But things start to get tricky from there. Each enemy has a shield and a series of hidden weaknesses. Discovering these weaknesses, through character abilities or trial-and-error, allows you to exploit them and break the enemy’s shield.  Breaking a shield causes that enemy to lose their current and next turns. It’s a simple enough system that we’ve seen before.  Persona 5 used a very similar shield/weakness system and fans of the JRPG genre will feel right at home.

The combat features another layer of difficulty introduced through bonus points. Each turn the entire player party gains one bonus point, each of which can be spent to power up a character’s move. Weapons hit multiple times, spells deal more damage, and buffs last longer. It’s important to strategically save up these points, as they can be used to break shields quickly or take advantage of vulnerable enemies.

Bonus points give the combat a sort of ebb and flow as you spend several turns setting up the perfect moment to deal massive damage. Bosses can further complicate your strategy by changing their weaknesses midway through a fight or by using powerful abilities that have to be interrupted. 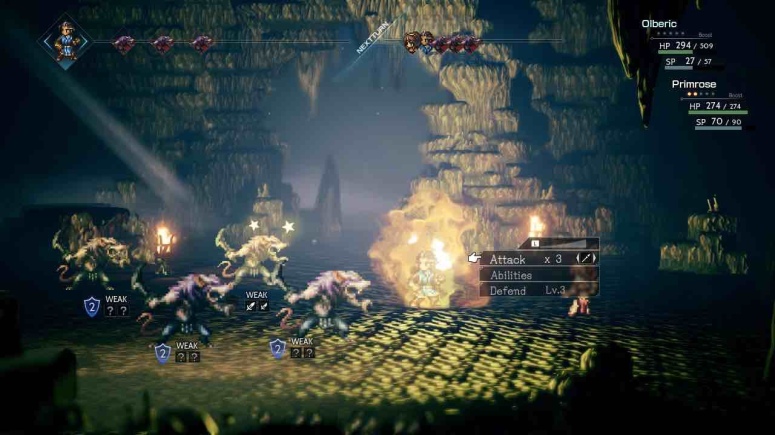 Such a dense combat system does have its flaws though. There are several ways to completely break combat later in the game, trivializing most encounters. Having a roster of eight characters can become difficult to manage at times as well, punishing those who haven’t grinded quite enough. Two characters in particular, Olberic and H’aanit, have abilities that force them into single combat and not having them leveled up enough can throw a wrench into the game’s momentum.

Octopath follows the individual stories of eight characters, who strangely don’t interact in any meaningful way outside of combat. These characters and their stories can be hit-or-miss. Their tales range from tales of revenge, to quests for fame and fortune, to religious pilgrimages. Some, like Tressa’s, can be endearing and heartfelt, while others, like H’annit’s, can feel predictable and even difficult to understand. Each tale stars one of the titular travelers as they roam across the continent, completing chapters of their story, but these chapters start to feel very formulaic about midway through the game.

You can break up the monotony with side quests and optional dungeons, but their rewards are rarely worthwhile and often boil down to blindly roaming towns looking for an NPC who mentioned something relevant to the side quest several chapters beforehand.

Overall, Octopath Traveler is a love letter to fans of 90’s JRPGs such as Chrono Trigger, Final Fantasy and Secret of Mana. But its ambition and scope seems to get out of hand at times, creating eight distinct and disjointed stories rather than one epic tale. A complex, almost puzzle-like combat system, amazing visuals, and powerful soundtrack help make up for the lackluster storytelling, but Octopath Traveler is unlikely to win over anyone who isn’t already a fan of JRPGs. 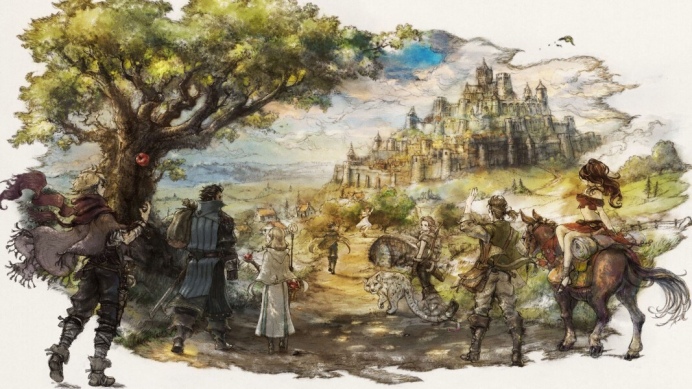