It’s another rally of Camelot’s Famous Sports Franchise.  With The Wii U version lacking key features, could Mario Tennis Aces hit this series back over the net?

In several ways Aces has improved over the previous title.  For starters, this game actually has content.  While Character models look pretty similar to Ultra Smash, You’ll see the visual upgrade mainly in Courts.  Every area was well thought-out.  Some include dangerous traps that can help, or hurt.  For example: Piranhas could catch your tennis ball, launching it right back at you or others.  One court is featured on a Pirate Ship, with a Mast jammed right in the middle.  Ricochet the ball off, or play around it.  For those wanting the regular court experience Aces allows it with no issue.  Outside of Adventure Mode, The old school option is present. 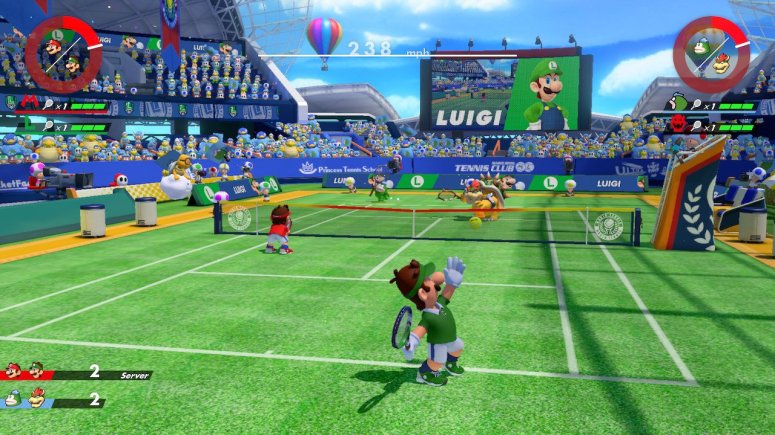 Controls for the core game feel comfortable regardless of the controller being used. Playing on Simple (or classic), takes us back to N64 glory days.  Topspin, slice, flat, lob and drop shots are all satisfying to score with.  Playing on Standard (New stuff), brings in a bunch of fresh options.  Now entering Fighting Game territory.  With the new mechanics in-place, it is possible to break an opponent’s racket causing a forfeit.  Hitting the Left bumper when your power meter is maxed, triggers a Zone Shot.  The game goes slow-mo.  Players are able to direct their shot.  Aiming for your rival increases the chance of landing a KO.  However, the opponent can use their energy stored to slow time in-an attempt to counter.  Timing has to be right, a failed counter will automatically damage the racket.  Learning The New Skills is a Story Mode requirement.

Ace’s Campaign is an interesting diversion that should take players 5-6 hours to complete.  Travel from Stage to Stage via The World Map.  Many level objectives could be a bit clearer, some may feel frustration in the Mirror World parts.  Win or lose Mario’s Racket will level up and he can unlock different ones as well.  Racket changing is exclusive to adventure mode.  Some missions are definitely more entertaining than others.  It’s quite comical knowing your participating in Tennis-Based Battles, combined with a story so absurd. 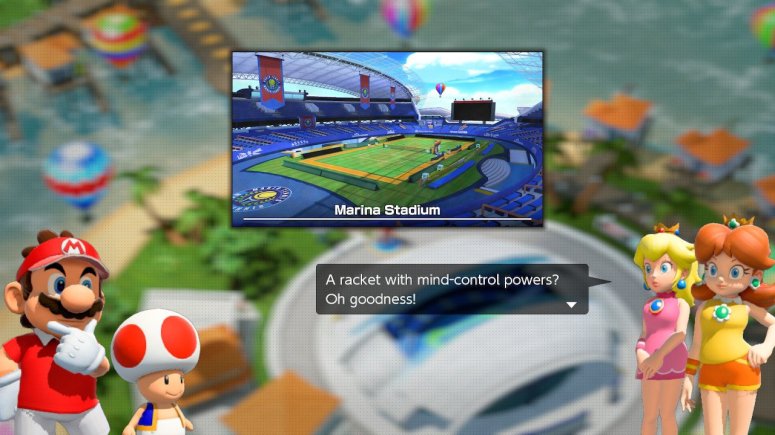 Need an adventure break? Well, this didn’t really work for me.  New Swing mode feels like an afterthought.  This is where players let their arms do the moving.  The Game wasn’t really registering my commands as I would have liked.  Swing could work at family hangouts, but not to be taken as a serious addition.  A little disappointing when you factor in the Joy-con accuracy in other titles.  Wii Sports remains the best way to play motion tennis on Nintendo Systems.

While new courses unlock during adventure mode, (online or off) Aces is a bit light on perks.  Like older games, participate in Singles Tournaments.  Challenge the CPU in Mushroom, Flower, and Star.  No rewards for completing any cups.  Some system (as Seen in Mario Kart 8) would have helped.  Different Rackets, Shirts, Hair styles, something to reward the hours that Tennis Nuts are guaranteed to generate.

Network Options allow for 1v1 Tourneys.  Connectivity in many rooms worked-out, while others left me with rocky results.  More positives than negative, but a drop of lag can absolutely affect the outcome of a tennis game.  Online doubles can be an awesome experience.  Two players on the same Switch system battling another duo.  It is possible to run a 2v2 with everyone playing from a different location.  Multiplayer is the rock of Aces. 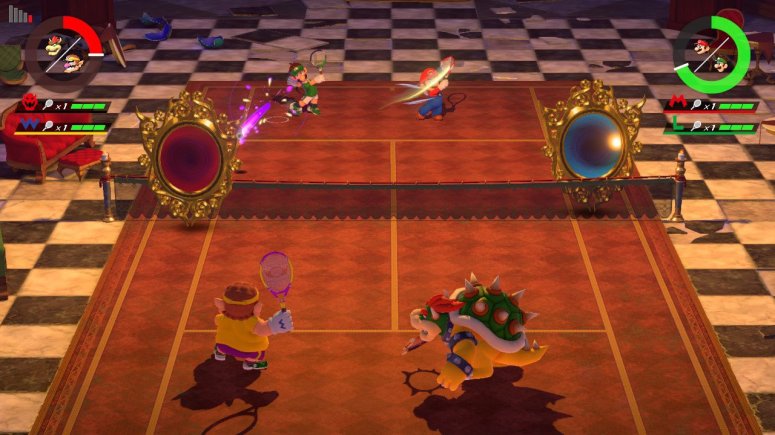 Camelot has taken the Tennis Game to the next level in many ways.  A new layer of depth with trick shots, slow motion, and power moves.  Mixed-in with the gameplay of old,  Classic fans won’t feel left out.  Skill Shot and Adventure may not be for everyone, but the Core Tennis is another hit.  Grab some friends and serve up the trash talk.

+Local Multiplayer is a Blast

-Matchmaking should be more consistent 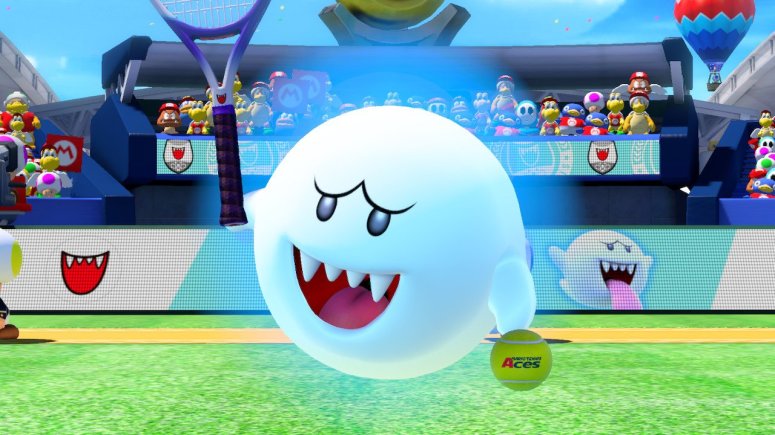