Namco’s Soul Calibur franchise is arguably only second to Tekken in terms of the company’s popular offerings, and with the most recent entry in the saga being around 6 years ago, with the next piece of the adventure poised to be released in the remainder of 2018, we’re celebrating the excitement with my top 5 guest-character suggestions that should appear in the franchise. Soul Calibur has been one of the most welcoming and daring fighting game franchises out there when it comes to cameo characters, doing a great job with developing faithful and fun movelists for characters from a variety of sources. I feel if they’re open enough to feature characters from those franchises, the following shouldn’t be weird for them either:

It might be asking a lot for Namco to partner with rival Capcom for this guest-appearance, but the main character of Star Gladiator has already appeared in other games, such as Marvel vs. Capcom 2, and it would be awesome for the futuristic bounty hunter to encounter his martial ancestor in Mitsurugi, who is essentially the low-tech version of who Hayato is. We’ve already seen with the various Star Wars characters that Soul Calibur has featured that the series and its mechanics can accommodate the look and style of plasma weapons, and Hayato’s fast paced movelist would be right at home amongst Soul Calibur’s cast.

With Marvel Comics being an entertainment juggernaut (see what I did there?) now more than ever, Namco would be wise to incorporate the character seen on the popular Netflix series, who’s now more well-loved in mainstream media than he’s probably ever been into their franchise. I chose Daredevil because he’s one of Marvel’s most prominent, skilled, and famous weapon-wielding characters. His lack of direct physical powers and skilled use of batons/Escrima sticks, staff, whip techniques and nunchaku skills make him a perfect fit for the series. His highly acrobatic and gymnastic movement would open the floor for a movelist filled with daring and visually stunning movements, as well as opportunities for his costume to look incredible in Namco’s high-def graphics. Daredevil has had a few different iterations of his look, with an armored version debuting in the 90’s that might fit in well with the medieval themes of Soul Calibur. His unique weapon, which can lock and reconfigure into all of the forms I mentioned above would allow for a deep stance-based character that could transition from different weapon-states in mid-combo, similar to what they’ve already established with Ivy.

The main character of the popular anime and manga series was practically created for a Soul Calibur appearance. With the character being well-loved and remembered by the fanbase, many of whom most certainly crossover with the same audience for Soul Calibur, many fans could be drawn to Soul Calibur from the inclusion of one of the finest swordsmen in anime. Mitsurugi has been well-known for being a strong and straightforward master of the Katana, and Kenshin could be a great foil to him, using speed and positioning to his advantage as opposed to directness and power. Kenshin is known for the many high-flying moves of the Hiten Mitsurugi Kenjutsu style, and all of the show’s signature techniques could be well-displayed in the stunning high-def graphics of the series.
Kenshin is also known for his mastery of “Iaido”, a hyper-fast sword-drawing technique that can cut down an opponent in a single blinding move, and would have to be a requisite stance for him.
Fans familiar with Kenshin and his personality know that his merciful, heroic side actually suppresses a deadly, dangerous, blood-lust filled side of his persona known as the Battousi, or in English, the Manslayer. Perhaps a set of commands could trigger this lethal and out of control state in Kenshin, with a penalty of health or something else exacted on the player in exchange for a speed and power boost, along with alternate moves. I personally don’t think the recent legal trouble of the creator of Kenshin should have any bearing on whether or not the character is featured in the series.

So I decided an out-of-left field entry would be appreciated, and in the most recent J.J. Abrams Star Trek film, we saw the appearance of Jaylah, a staff-wielding alien that aids Captain Kirk with her vicious and effective martial arts skills. Jaylah is visually distinctive and would add a bizarre outer space flavor to the game, as well as bringing in a fan base who might not normally appreciate Soul Calibur.
Her staff weapon doubles as a laser-cannon, and that element could be incorporated into the gameplay perhaps via a combo-reward mechanic, where if enough complex moves are performed, she could build up a devastating blast a few times per round. It would also be fun if her actress Sofia Boutella could jump into the booth to record some trademark lines and phrases as the fierce alien warrior.

1. The Prince (Prince of Persia)

Aside from possibly Kenshin, The Prince is the only other character on this list who wouldn’t have to trouble (that far) through time to meet with the cast of SoulCalibur. A part of a legendary game franchise in his own right, The Prince has had a number of weapons and costumes that could all be incorporated into SoulCalibur.
It might be overpowered, but maybe the Sands of Time mechanic could be introduced into his system somehow, if nothing else in a superficial way that would be a wink towards the famous ability from the games. His agile fighting style and slick, effortless counter-moves shown throughout the game could make The Prince a great defense-based character, who’s strength could exploiting the openings given by an enemy, instead of using offensive pressure. I think this approach would be more in line with the cunning and clever aspect of the character seen in the games.

Overall, there’s almost unlimited potential for characters to show up in SoulCalibur. They’ve shown they’re open minded as a series, and willing to feature characters from almost all walks and origins in their series, and if there’s some I missed or didn’t think of, sound off in the comments below! We want to hear your picks for the newest Soul Calibur guest warriors! 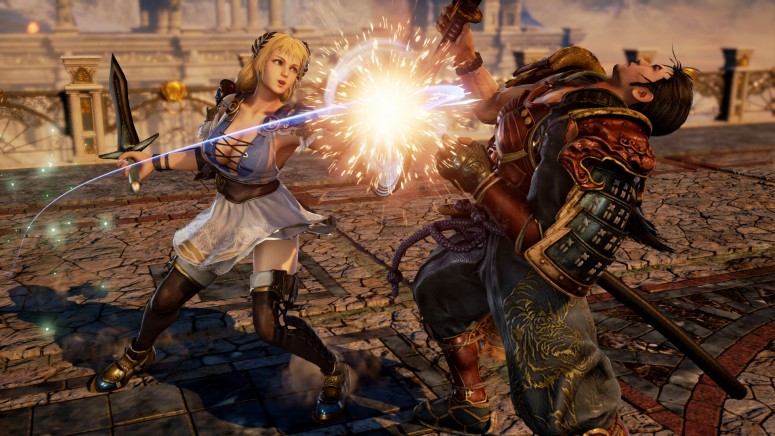