**Zero Story Spoilers in This Review**

God of War is a masterclass example of how to revolutionize a franchise. Most developers take a “If it ain’t broken…” approach but what Santa Monica Studio has done here shows careful planning, inspired creativity and an artfulness that elevates the series to new heights.  Director Cory Barlog enriches Kratos— a beloved but fairly two dimensional character— by infusing his cold exterior with an older, wiser, and conflicted heart. The decision to make Kratos a father and travel with his son, Atreus, gives a new level of emotional depth to his adventure. Unlike the linear nature of the original games, God of War opens onto a (literal) mountain of complex, layered and beautiful world design. In the 13 years since the original God of War the industry has matured, and expectations are higher for adult games; Krato’s plight has thankfully aged into something still mercilessly violent, but now modernized, fresh and intelligent. 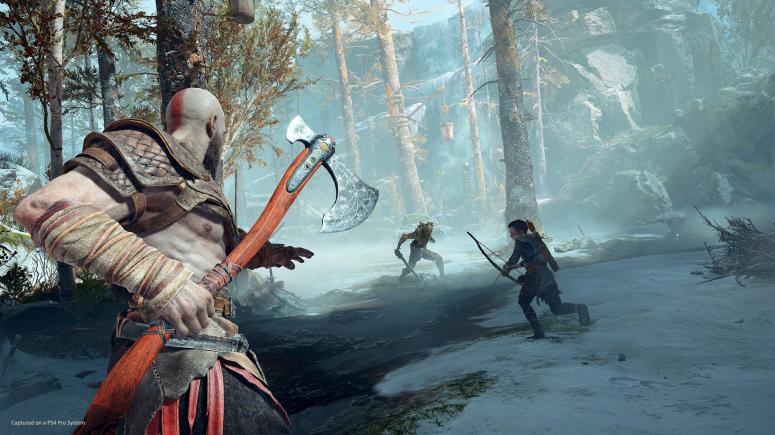 Metroid Prime and Resident Evil 4 both blew open their respective genres while maintaining their spirit intact and God of War carries the torch. Astute gamers will pick up on these games as influences— you can feel Prime’s presence in the many hidden rooms Kratos and Atreus have to search to find important upgrades. There’s also the move to shift the camera perspective behind Kratos (as Resident Evil 4 did) which creates new combat scenarios and a new intense level of immersion. Just as Breath of the Wild recently reinvented the Zelda universe into a more open-ended experience, God of War also has a wider scope with many more side quests and things to explore giving the player nice breaks between story beats. Dark Souls’ influence can also be felt in the unrelenting A.I. and tactical battles. This is a game heavy on story, character development, and mythology. It also is a towering totem to the many legendary games that came before it.

Perhaps the most revolutionary change, though, is how Kratos brings down the hurt on his enemies. God of War in the past was a button masher’s nirvana and while there was strategy, it was more about keeping the combo counter going than actually figuring out how to win a battle. Now, Kratos fights with an axe and the battles will leave you breathless, scrambling for health upgrades and making heroic last minute comebacks. The axe is especially refreshing; Kratos can throw it into enemies and freeze them in place and go in bare knuckles, or he can call it back and jump in with a swinging combo. There is a long list of upgrades for the axe that you can choose to pursue and the choices you make leave room for interesting improvisation. Of course, Kratos is still the God of War and after enough killing he can go into full on rage mode where he becomes invincible and on fire. 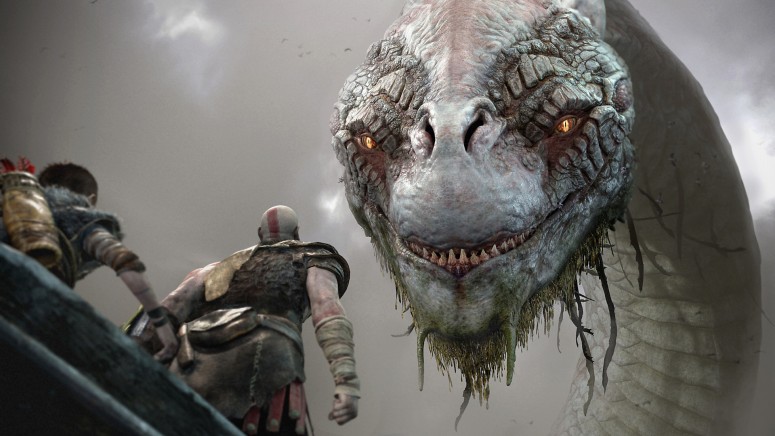 To compliment the more nuanced combat is a new colored loot rarity system. Kratos finds gemstones that slot into gear that give perks like lowering cool down times or increasing elemental damage. There’s also a crafting system in place, and while simple, it adds another satisfying gameplay loop into the mix. Every gory finisher, every successful axe throw, comes with satisfying player feedback and the bone-breaking sound effects will rock your speakers. Even when combat ramps up towards the end and you’re dealing with many enemies at once, you will feel totally in control and in awe of how amazing everything looks. But what pushes it over the edge is the elegant way you both watch and participate in the father-son dynamic. Atreus weaves in a deeper story complexity through journal entries and dialogue with his dad than would prove possible with Kratos alone. Additionally, his perspective allows Kratos to be a man of few words while still providing endearing commentary on your surroundings. The duo-dynamic proves functional too as you can control Atreus’ bow and arrows which help to distract, stun or finish off selected enemies.

It goes without saying that God of War has always been a graphical showcase for each console it has appeared on, and this is no exception. To my eyes, these are the best graphics on the market— the polish, the detail, the variety and the pure love that is poured into every area, every set piece, is absolutely astonishing. The fire and brimstone feels hot and dangerous, the smokey caves and deep mines mysterious, and the towering mountains ring out with an epic scale. On the PS4 Pro you can switch between high resolution mode (not quite native 4K) or a high frame rate mode. I chose high frame rate because while the resolution is limited to 1080p, it still appeared incredibly sharp, but the action was much smoother. God of War really comes alive in motion, with lucid animations, awe-inspiring particle effects and wonderful creature design. 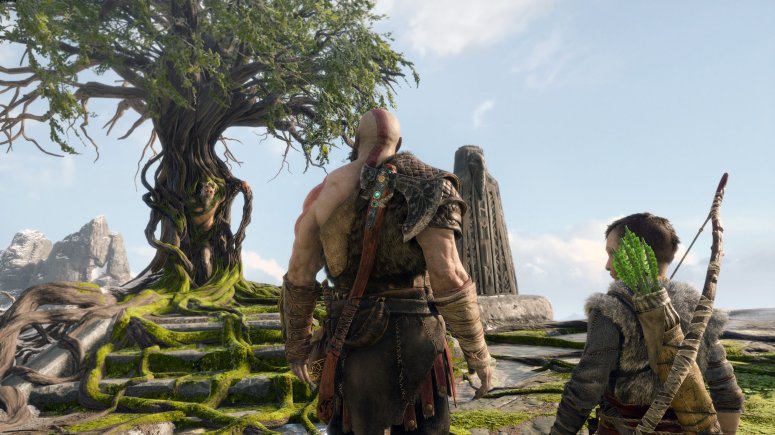 Santa Monica Studio went with a single-take camera shot through the entire game which is bold and ambitious. This does two things: 1) It gives the sense of presence with Kratos and Atreus where you’re with them uninterrupted on their journey, and 2) It makes it impossible to stop playing! And seriously, there are no traditional loading screens, and while the loading is masked in certain areas, you always feel at any moment anything could happen. There are certain sequences where it’s actually hard to believe what you’re seeing is being rendered in realtime in front of you and it never had to resort to a loading screen, there was never pop-in, there was never any glitches or weird bugs— it’s a near flawless presentation. When these moments are paired with the incredible swelling soundtrack, complete with symphony and choir, it can feel weightless and otherworldly in it’s execution, like a gold medal athlete at the peak of their game. This level of quality also stays throughout the whole journey, which took me somewhere around 50 hours total with doing most of the side quests.

I purposefully haven’t discussed the story in this review and that’s because it’s too fun of a ride to spoil. You don’t need to know anything about the old games to enjoy this, but if you do, you’ll be drawing parallels throughout. There’s a couple moments in the game that harken back to the old titles in a spectacular fashion, transcending nostalgia and really emotionally connecting with the past. But those moments are still effective to new players and are presented with white knuckled energy. The relationship between Kratos and Atreus is a memorable one and the story arch for all of the characters in the game is satisfying in ways most games can’t pull off. What a sequel to this will be like is anyone’s guess, but it will certainly have a high bar to meet. In many ways, this feels like a game that will never be bested, only riffed on and expanded on. Like Breath of the Wild last year, God of War is this year’s untouchable masterpiece, an achievement in gaming that you will be spoiled by every time you turn it on. If you own a PS4, Pro or not, this is the game you have been waiting for.

God of War Gets 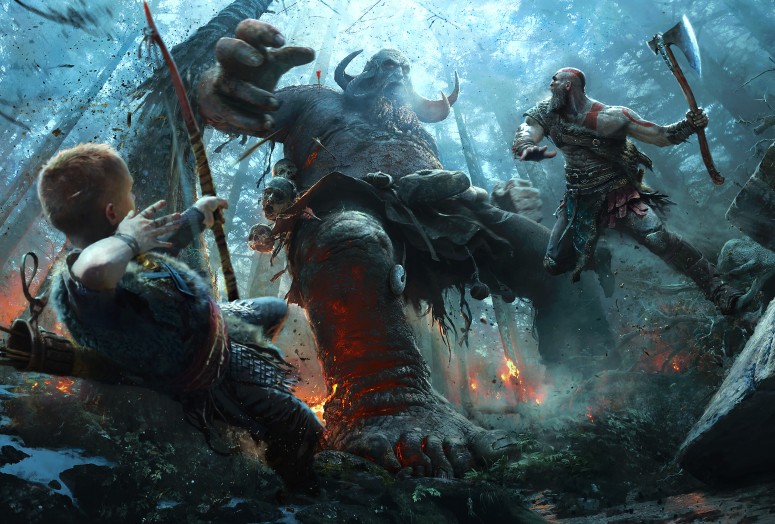