It was surprising Criterion Games took a break from The Burnout Franchise, especially considering how popular the series was.  The team would now give the FPS world a go.  Introducing: Black (2006), A game capturing the chaos and excitement of Burnout, but transferred to a different genre.  EA would publish and release on PS2 and Xbox.

This was one of the later releases of the Sixth Generation and it shows.  Graphics (for this time) still shine through.  The weaponry is quite detailed, with wear and tear easily seen on firearms.  Sound effects/music fits perfectly with the games action-movie tone.  A solid soundtrack reminiscent of an Arnold or Stallone flick.  Those with surround sound (or awesome headphones) are in for a treat. 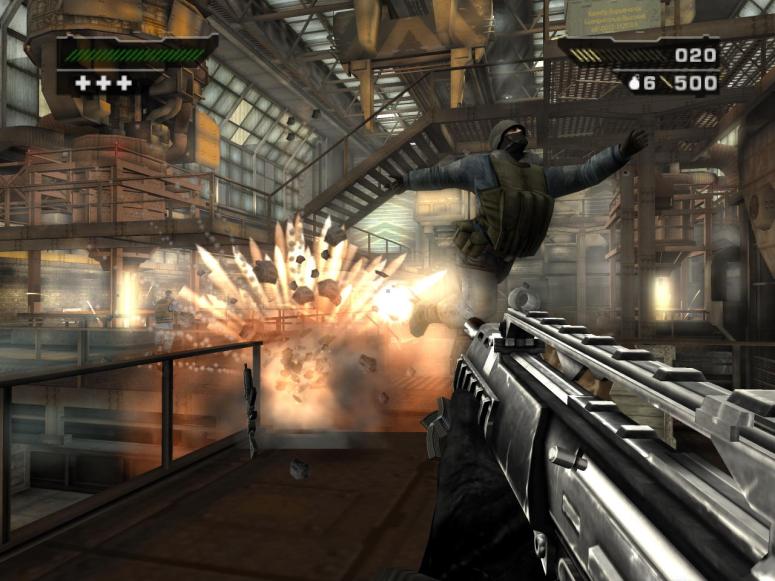 Black’s strength lies within its hard-hitting gameplay.  Weapons will recoil, areas are highly destructible.  Repetitive firing from certain weapons will leave gunshot residue.  Bullet holes mark up the walls.  War-torn environments not only add a layer of realism, but can also reveal hidden objectives.  Always give levels a full-look before advancing.  This is pivotal for achieving 100% completion.

Considering life does not regenerate, players must collect/conserve health packs, using them when the time is right.  This gets tricky on tougher difficulties as opportunities to replenish life decreases.  Same can be said about ammo.  Make your shots count as Some enemies are layered in heavy armor.

Developers placed soldiers with RPG’s in (sometimes) hard-to-find places.  This makes it very satisfying when you can shoot them in the middle of their attack.  They explode and fly hilariously to the ground.  Others will rush the screen, while some will take advantage of nearby cover.  Every confrontation is intense, and thrilling.  Impressive for a game now two generations removed.  Another aspect I enjoy is the occasional help from AI Buddies.  The friendlies are very useful in the game’s big shootouts.  Taking cover, actually killing enemies who pose a threat.  Impressive.

Black has 8 levels, and will take around 6 hours to complete.  Given how satisfying the combat is throughout, its easy to dream about multiplayer.  I imagine how a sequel would play out.  Taking into account the two-gun carrying limitations and non regenerative health.  In this modern landscape it would be a much-needed escape.  Even with the lack of coop or versus, Black is Definitely fun enough for a second play-through.   It launched at 40 bucks and really this was a fair asking price at the time.  Use cover, be aware of the surroundings.  Make your enemies fade to black.

-Replay value could be better