Reviewed on Xbox One

Marvel vs Capcom was a series that felt like an event.  Cancel other plans, wrangle your friends.  Yes, that big of a deal.  Arcades and Home Consoles alike would bring out the best within fighting circuits.  Everybody had at least a few characters they could gravitate towards.  With a massive roster like MVC2, it was almost guaranteed.  All-star characters, obscurities.  The point is that there were options.  You could argue MVC is the best crossover franchise in all of gaming.  It was a long time coming, but almost ten years after the release of 2, a third iteration would appear.  Models went from 2D to 3D, and more focus was placed on fighting rather than features.  Less characters as well, but many highlight players were still on the select screen.  Even at an earlier age, I thought it would be cool to have some explanation as to why such a mash-up is taking place.  The latest generation of systems would finally receive a story.  This is Marvel vs Capcom: Infinite.

The main plot is a result of cosmic tampering.  Ultron and Sigma have joined together into one being thanks to the Space and Reality stones.  A major distortion has taken place.  Famous Capcom and Marvel locations have fused together.  One thing I liked in this short mode was the pairing of characters in cut-scenes.  Frank West and Spidey showing-off their photo skills.  Ghost Rider and Morrigan both dabbling with dark world affairs.  This add-on should take the average gamer around 3 hours to complete.  While some of the intended jokes fall flat and dialogue can be cringe inducing, there’s enough here to make it through one playthrough.  Tekken 7 and Injustice 2 both deliver a better narrative if we’re comparing 2017 fighters.

MVCI shares some similarities with older vs. games.  It does away with 3v3 battles and scales things down to 2v2. Of course that’s how the very first game was.  While it’s still a fast paced fighter, veterans will notice the speed overall has slowed.  Also please note the helpful Call-in assist attacks are no longer present.  A feature from a different Capcom vs. title makes up for it.

I thought the inclusion of Infinity Stones may cheapen the experience, in the way gems destroyed Street Fighter x Tekken.  Good news, this part of the game is well-executed.  A return feature that was actually used in PS1/Arcade Fighter Marvel Super Heroes.  It’s been taken to the next level here.  Every gem has a standard attack command, and an infinity storm ability.  Six in total (Power, Mind, Soul, Time, Space, and Reality).  Two would stand out the most during my playsessions.  Using a Power Gem will send enemies backward, setting them up for combo opportunities.  The Mind Gem will break an enemy’s defense even when blocking.  Stones provides a big help, but they never seem unfair since the enemy can use one just as powerful.  The smooth combos and Infinity Stones make for a fighting system that’s accessible, while providing a bit of strategy.  Combat overall feels balanced despite the cosmic mayhem happening on-screen.

Link combos together, hit the right bumper to continue the chain bringing in an ally.  I noticed when swapping characters the process is intentionally slower.  I’ve been able to catch both opponents in my super move more-so than ever before.  Infinite definitely makes you think more about tagging.  The arcade feel of remains in-tact, with characters controlling smoothly.  Still it’s tough to get fully invested in the game.  Many of the characters are no longer present.  Due to the ongoing movie franchise legal issues between Marvel (Disney) and Fox, the fans have to suffer.  This means no X-men or Fantastic Four characters in-game.  Wolverine, Magneto, The Juggernaut! You get the idea.  Other characters making up for the massive void left behind would have been appreciated.  This didnt happen.  It’s like making a Smash Bros game, then taking the Plumbers out.

How about the cast of The Defenders? Inhumans? There are still several Capcom characters only used in Tatusnoku vs Capcom.  This would have been the perfect time to bring them over.  The launch copy of MVCI has a roster of 30.  You’ll see other characters interacting in cinematics (Black Panther, Monster Hunter), but unplayable at launch.

Joined worlds makes room for some interesting levels to fight in.  Playing through the story mode will unlock more.  Like the character models, the stages are a 50/50.  Some areas are put together with care.  The Wakanda stage comes to mind.  Enjoy as the Giant Black Panther Statue stares at combatants in fine detail.  Some Story Stages are bland, feeling like fast throw-in’s to keep the plot going.  They either lack detail, or have nothing happening in the background (Zero activity).  What’s really disappointing is the odd design of characters.

Human flesh/Faces appear as if they were ripped from a last generation game.  Iron Man (with his helmet on) looks fantastic. The richness of red in his suit, the armor shine, looks great.  Same can be said for Zero.  Mega Man X, even Ultron.  Heavily armored characters are pleasing to the eyes.  Captain Marvel, Chun-Li, Dante, characters like that need more time. So graphics as a whole is a mixed bag. 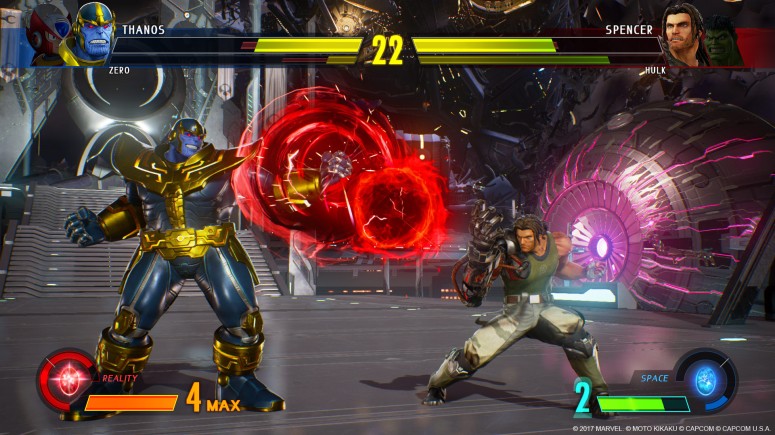 The inclusion of gems into gameplay is successful.  The core fighting remains smooth, though admittedly more casual.  By default auto comboing is on.  Thankfully you can disable it.  It really feels like your playing on auto-pilot, definitely not a fan of this method.  Even if you’re a newcomer I recommend shutting it down.  Play Mission mode and select the practice trials.  I’m pleased to announce that MvCI features an Arcade feature! You can no longer unlock character specific endings, but the mode does exist.  Flimsy launch content overall, but thankfully the online runs smooth.  Had great success connecting and fighting with others.  Much better than the previous title.  Those who really dig Infinite’s combat and character cast will enjoy this aspect.

Thanks to corporate-suit bickering, The Fans had to miss out on what could have been a grand MVC experience.  Dr. Doom worked into this story, would have made things really interesting.  This game is so serious!  There has always been a level of charm in this series.  Whether it was the upbeat Jazz music of MV2, or the laugh-out-loud characters thrown in Part 3.  Deadpool comes to mind.  You know one of the most popular comic book characters to date.  Something is missing from Infinite, and it’s not just Wolverine.  But his removal is a fatal error.  Generic hero music, dull menu screens.  Older titles were able to walk the line.  We’re hoping Capcom will add more life to the game in the future as they did with MVC3.  Wait for them to do so if you’re at all interested in taking this ride.

Marvel vs Capcom Infinite Gets

-The Loss of X-Men/FF Characters is in-fact a Big Deal Capcom.  Make it right!