Nintendo! If you’re listening, reading, woke at all about the Switch and the amazing position you’re in now, please, PLEASE, for the sake of all of us out here, allow more developers to play with your franchises! This is how you convince studios like Ubisoft to put games on the Switch. Give them Mario. Give them Zelda. Or even give them something more obscure like Startropics, (Come on the world needs another Startropics) and let them be creative! This is how Nintendo gets a strong rotation of third party support— and how they can take their time on their next big budget masterpiece and not have to freak out about putting a game out every month for their customers. Mario + Rabbids: Kingdom Battle is a prime example that with a little trust, and a whole lot of passion, a third-party studio can be allowed to develop an excellent Nintendo game. 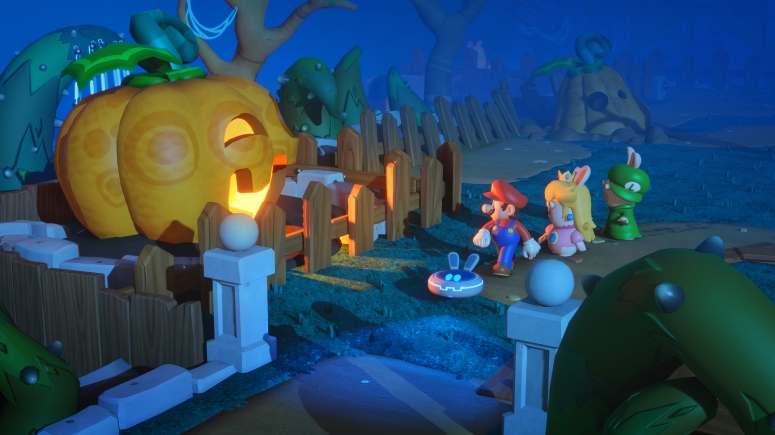 The basic premise to MRKB is that after those mischievous Rabbids misuse a powerful weapon their world and Mario’s collide and everything is thrown out of whack. Now, it’s up to (you guessed it) Mario to restore the balance of all things and reset both universes. Thankfully we aren’t rescuing the princess again, though, as we’re probably about to do that next month with Mario Odyssey. This conceptually allows Ubisoft to create a funhouse version of the Mushroom Kingdom where half of everything mutated in some weird Rabbids way, with a visual flair and vibe that constantly upends expectations for the Mario universe. It’s effective, and works way better than I ever thought it would. In fact, at times it feels like Mario (who plays the grounded character here) seems almost boring by comparison to the lunacy around him. But, of course, Mario is forever endearing and he is how the player relates to the madness without being overwhelmed by it.

The gameplay is about 1/3 exploration and puzzle solving, and 2/3 turn-based strategy. You command three characters in a squad, each with their own tech-trees, special skills and customizable weapon load outs. The goal changes during fights, sometimes it’s about eliminating all enemies, other times its about escorting somebody to safety, other times it’s about eliminating a powerful foe. During these battles you take turns moving your characters and then watching the CPU do the same. Each turn typically allows movement, fire, and a special ability for each of your characters. Cool downs dictate how long until the next special can be used, like a team heal, or a counterattack, and smart players will learn how to budget their moves without leaving themselves vulnerable. The comparisons to X-COM are fair, but instead of base building in-between skirmishes, you’re moving through different environments collecting coins, unlocking secrets and solving puzzles. But, those who have played turn-based strategy games will very clearly have a head start here, as it is not the most approachable Mario title. The challenge starts to ramp up after the first world and if you’re not careful, even season strategy vets will find themselves having to restart battles more than a few times. 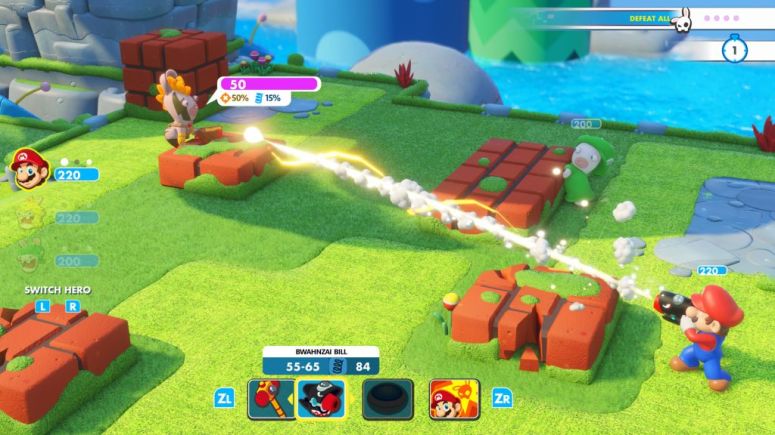 Herein lies a worrisome observation about MRKB: It’s not accessible. My girlfriend thought at first it was Mario Party, and when I explained it wasn’t, she still wanted to try to play it. She moved around for a bit, and then triggered a battle, and was immediately confused. That’s where her experience ended. Now, she’s not a gamer, besides the Mario Kart here and the Jackbox Party game there, but she is more interested in Nintendo than anything else. To me this symbolizes a lot of potential issues with younger players, or casual players, picking this title up because of the bright environments and recognizable characters and then being super confused and disappointed that it’s not a traditional Mario game or party game. But that’s not a slight on MRKB, it’s just an observation that I wanted to make. Basically, you have to like strategy games to like this, regardless of your affinity to either Mario and/or Rabbids.

Assuming you’re still reading you’re either into strategy games or maybe you want to get into them. This is a fantastic spring board into the genre that typically is only on PC. Partly because mouse and keyboard intuitively seems to work in this style game, but also because turn-based strategy games are holdovers from an earlier age in gaming when PCs did dominate and graphics couldn’t articulate more complex thoughts or actions. Ubisoft made controlling the battles a breeze, and incorporated dynamic camera angles that swoop in next to the effects and movements giving an immediacy to the action. Everything is laid out clearly, and explained just enough to make sense but leaves enough open for experimentation. Strategy buffs will dig the unique spin on the gameplay as well as appreciate the time and effort that was put into the polish of the game– the likes of which is usually not seen in the genre. 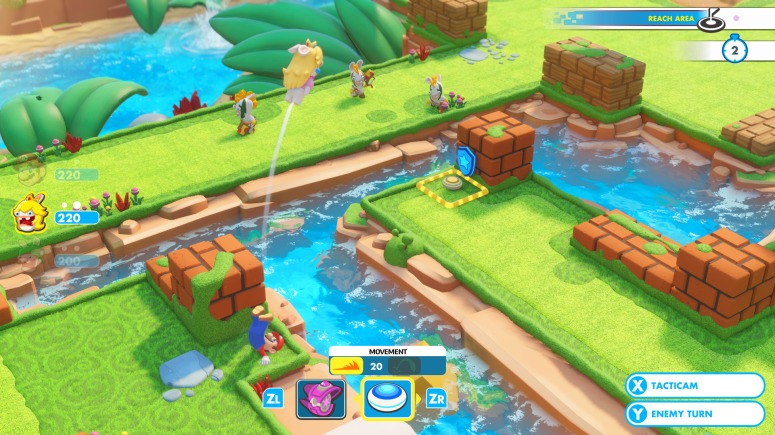 And polished isn’t the half of it— MRKB is a technical marvel for the Switch. I mean this game at times looks as good as anything I have seen on PS4 or Xbox One. It uses the Snowdrop engine, the same one found in The Division, and it is seriously impressive what Ubisoft has achieved here. Not only is this engine incredibly versatile to be able to render something like the dark and dreary apocalyptic streets and sewer systems found in The Division, but then it can turn around and render Mario’s bright primary colored worlds, complete with wistful skies, bubbling waters, and soft-focused backgrounds. All of this comes alive with creatures and characters that animate with a Pixar-level of expression. Opening cinematic aside, this is all presented in the in-game rendering engine, not pre-rendered CGI. While the technical numbers seem less impressive, with the dock resolution at below 1080p, Snowdrop incorporates a beautiful anti-aliasing that provides smooth rounded edges and rich lighting that gives everything a clear, and almost-clay like solidity. There’s also no real slow-down to speak of, and load times are brief. Oh, and the music is composed by Grant Kirkhope, who did a ton of the classic Rare soundtracks from the N64 days! Wow!

Seeing the Snowdrop engine run on the Switch is great news for Nintendo as it could open the door for future games that use the tech. Seeing games run on Unreal and now Snowdrop on a Nintendo platform speaks to the lengths at which Nintendo has gone to modernize and make the platform inviting to more developers. Watching it work this well in both docked and portable modes also speaks to what a technical marvel the Switch is unto itself. I’m still amazed and entranced at pulling the Switch off the dock and taking the battle upstairs to bed. The nature of MRKB is actually also perfectly suited to on-the-go style playing. Besides being able to just throw the Switch into sleep mode at anytime, the turn-based nature of the battles and broken up worlds all give you plenty of downtime and doesn’t require constant engagement. There’s also a two player cooperative mode that unlocks that allows you to show off the multiplayer aspects of the joy con and system design. In many ways, MRKB is a showcase for the system, as Ubisoft has clearly made the effort to utilize everything the player gets with the Switch hardware. 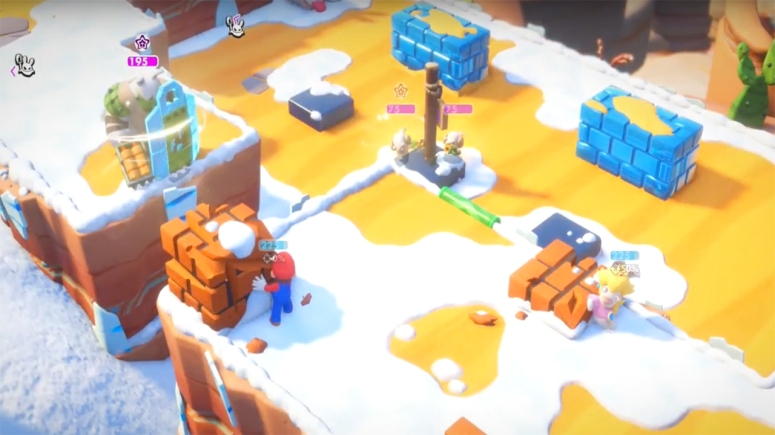 So where is the online Ubisoft? Nintendo? Very noticeably, there is no community within this title. There are no leaderboards, there is no online co-op play. No messages from the developer when you log in, no weekly or monthly challenges. It’s an island unto itself, a callback to the old days. But we all know that this isn’t an intentional throwback to the old school pre-internet days. This is another sign that third party developers are still unsure about online on Nintendo systems. This hesitancy can be traced back directly to Nintendo themselves sending mixed messages about what their Nintendo Online Network will be like, what the advantages of the iOS and Android apps are. Faith may have been restored in their hardware design with the Switch, and sales are also reflecting that, but most gamers and even devoted Nintendo fans are still highly skeptical that Nintendo will ever provide an infrastructure that allows people to play together in a way we have come to expect from Microsoft and Sony. Why can’t I design battle stages and share them with others and rank them? Why can’t I see what trophies my friends have won in their battles through the campaign, and why can’t I do PVP multiplayer with fog of war? There just seems to be some missed opportunities here. Why can’t I team up with two strangers (or friends) and take on randomized skirmishes, with difficulty modifiers and unlockables and incentive to share the experience with others? At least Ubisoft has said that they will continue to support the title with future paid DLC. Let’s hope it’s worth it!

Nintendo did a great thing allowing Ubisoft to unleash their talented developers into the Mario franchise. Although the Rabbid games haven’t seen much critical acclaim, or seen much activity in the last few years, the combination with Nintendo brings out their best qualities. While the Snowdrop engine is the technical showcase of the moment on the Switch, MRKB is truly powered on passion. It’s no secret that most people who get involved in game design love Nintendo, most were inspired by Mario himself to devote their lives to the industry. It’s also no secret that a lot of developers, if given the right opportunity, would absolutely jump at the chance to make their own Nintendo game. As time marches on, the torch must be passed to younger generations to continue these legacies. I’m hopeful that the openness of the Switch and partnerships like this one with Ubisoft are the direct result of a younger generation’s influence and understanding of Nintendo’s past, present and future importance in gaming.

– Potentially off putting for new or casual players 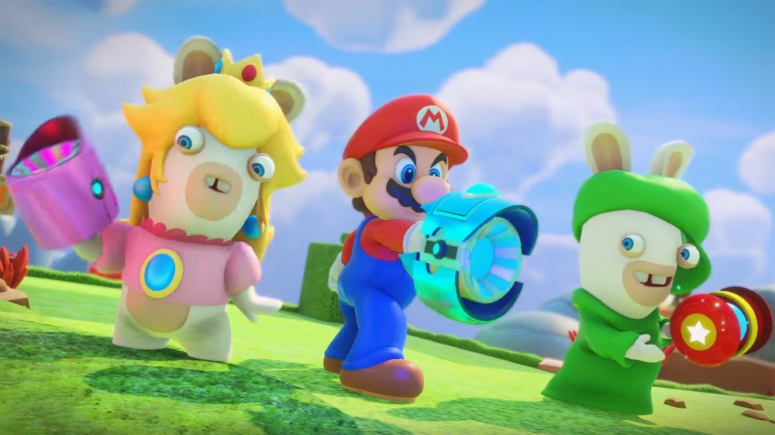