Namco brings us another compilation of Arcade classics, this time on Nintendo’s Switch hardware.  A Digital-only release found within the eshop at a $29.99 pricing.  Legions of gamers have played many of these included countless times over.  Dumped quarters into various cabinets.  Made Arcade (and Laundromat) owners happy, all-the-while hanging with good buddies.  So, what incentive is there to go back again?

This version of Museum has some unique pairings.  The official lineup is as follows: Dig-Dug, Galaga, Galaga ‘88, Pac-Man, Rolling Thunder, Rolling Thunder 2, SkyKid, Splatterhouse, Tank Force and The Tower of Druaga.  Every title listed features an extra challenge. While only one trial is assigned per game as billed, you’ll certainly be tested.

Dig Dug for example asks players to kill as many enemies as possible by only using rocks. The game is keeping score.  Players are timed, and lives lost are counted against the score.  Upload stats to online leaderboards.  That is the extend of Network interactivity.  Games primarily intended to play with others (Pac-Man Vs, and Tank Force), could have benefited big. Though it’s a bit easier to deal with the lack of online play, considering the system can be easily brought to another location.  Hey if you’re asking for 30 bucks at launch, I can ask for Online Play.  Real Talk. 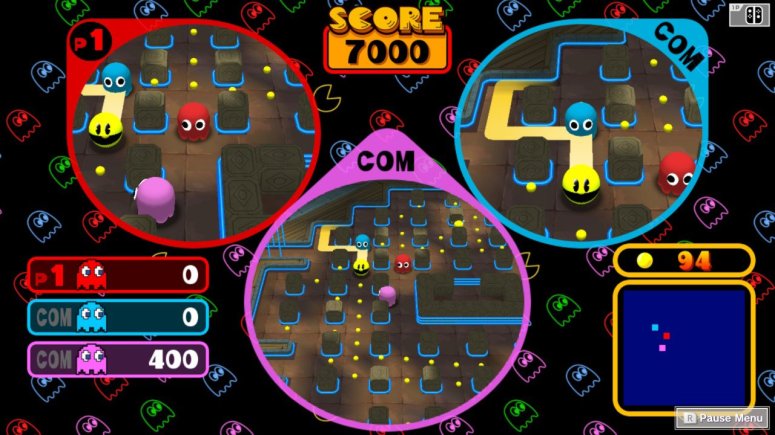 A Bonus appears in the form of Pac-Man Vs. which was last seen on Gamecube.  Switch Vs retains the Mario Commentary, and as expected, does away with the cumbersome GBA-Cube-Cord controller set up. One to three people will Play as a Ghost sharing a single screen, while chasing a computer operated Pac-Man.  If someone has another console, three will continue to huddle around one, while the solo player must avoid the ghosts on their own switch.  It’s a fun diversion, but to get the most two switches should really be present. So honestly, big hurdles are still in the way of fully enjoying Pac-Man Vs.

One rare addition The Tower of Druaga, is very similar to Gauntlet.  Instead of Life, time automatically depletes instead. Players move ungracefully around maze-like areas searching for keys. Advance starting at an almost snails-pace using sloppy melee attacks.  Atari’s game did it better in every way.  Both rolling thunders require hot hands to deal with the barrage of seemly endless (and similar) looking thugs.  At least Rolling 2 offers Two Players simultaneously.  Lots of shooting and ducking, but I’ve always wanted the platforming to control better since jumping is a key part of both.  Neither will really leave a lasting impression, but the graphics and music of Rolling Thunder 2 is solid. If we can include two rollers, why not something else held in much higher regard?  It should be a Namco Bandai law to include Ms. Pac-Man in any classic collection.  She is sorely missed here.  Pole Position is the other immediate head-scratcher.  Both have been featured in previous Museum ports.  Where’s Xevious? Mappy? Time Crisis utilizing Motion Controls? Okay, back to the review. 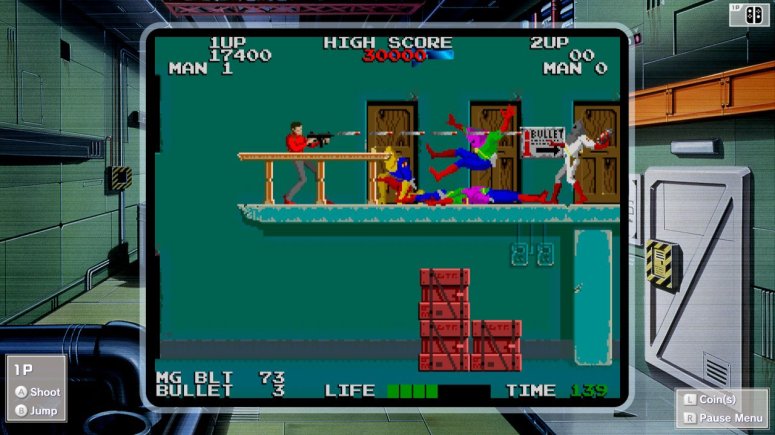 What stood out to me is that games I’ve played 1,000 times over, have been made even more enjoyable with this hardware.  Namco Museum Switch Edition has a great HD Rumble option and it’s games like Splatterhouse that really take advantage.  No surprise this horror brawler still holds up well.  Rick runs through the deadly demons coming his way from literally everywhere.  You’ll notice an extra thump as rick swipes his cleaver.  Taking demon heads, and chair legs from living-room-furniture never felt better.  In Galaga 88‘ zipping to the next world, you can feel the Ship’s blast-off process within the joycons.  Explosions from advanced Alien ships shake things up as well.

All control selections fit comfortably.  From Pro pads all the way down to Solo Joycon set-ups.  Options allow for fast modifications.  Turning the screen 90 degrees is great especially when undocked.  It can be done with a simple press of the Plus/Minus button from the main menu.  It gives games such as Dig Dug and Galaga that feeling of authentic arcade cabinet action.  Increase the intensity of scan lines to make this really feel like an authentic coin-op experience.  Every title has 2 Wallpapers. Players can adjust the screen height and width also.

Namco Museum comes with 11 games, without any real extras.  Content for History Buffs would have been great.  Old Box Arts, Videos.  Stock footage of people with dated clothing and hairstyles.  Nope.  No extra throwback love.   I appreciated the conversion of every game present.  My concern was that titles would be slapped-on with a few wallpapers then shipped out.  Thankfully you’ll find Superb emulation in this bundle. Your Classics are safe.  Priced at $29.99, ultimately the lineup should have been stronger. No getting around it.  Museum is one big tease.

-Not all the games are Great 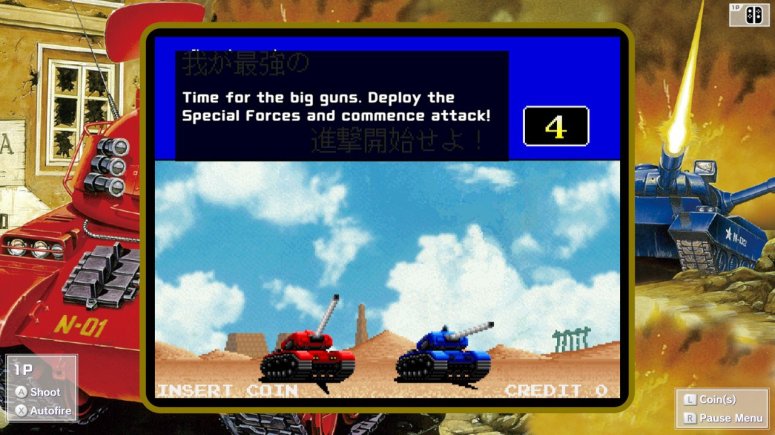