Splatoon on the Wii U was the equivalent of a great performance in a terrible movie— Those that stayed got to experience it, but most missed it all together. It sold well all things considered, but the larger problem was that it was on a system that just wasn’t turning around and no single game was going to be the Hail Mary that Nintendo needed. Recent reports have put the Switch at around 4.7 million units sold, on par to do 10 million by the year’s end which is almost the entire lifetime sales of the Wii U. Splatoon 2’s quick appearance on the Switch is no accident, Nintendo knows they have a hit on their hands and they needed to breathe new life into it sooner rather than later. While it’s not a complete reinvention, Splatoon 2 improves pretty much every aspect of the original team shooter and throws in a great new mode that really rounds out the package.

In the world of dingy, military shooters and boring macho attitudes, Splatoon 2 is a bright, colorful and fun diversion. Nintendo’s polish is everywhere, whether it’s the wet, drippy ink you shoot along the environment, or the street art inspired clothing designs your Inkling sports — there’s a hip, youthful vibe that pulses through the game. Environments are a compelling mix of industrial utilitarianism with an outdoorsy, urban futuristic punk spirit. Levels are presented right as the sun is shining, and players pop right out and it’s very easy to distinguish who’s on what team and what the objective is. Musically, Splatoon 2 continues the punk, electronic experimental pop that the first game had, and expands the palette of sound in every vivid way possible. Even shops, which are essentially glorified menus, are dripping with character, amazing designs and sonic personality.

There’s a lot of value here: You get a creative single-player campaign, a multiplayer suite of four game modes across a variety of levels, and a cooperative horde mode called Salmon Run that is severely addicting. Layered onto all of this, like in the original Splatoon, is a leveling system, a gear system and a constant flow of weapons for sale. New to Splatoon 2 is the ability to cash in tickets to buff your experience gain, or cash collection, or gear leveling, and even more options to customize your specific abilities. Powering up Special weapon attacks is satisfying and all the sub weapons have uses in the various game modes— there’s an incredible gameplay loop between all the modes and building your play style. The Salmon Run mode takes ideas from Gears of War and Left 4 Dead and makes it its own. It gets extremely challenging to take out the hordes of Salmon, collecting quotas of their eggs and surviving the three rounds. As you improve, your pay multiplier increases, but if you fail, you’ll lose rank.

There’s a ton of talk about the Nintendo Online app out there and all the things it does wrong, and I’m not going to spend a ton of time hammering that in here. Yes, the Nintendo Online app is a mess, and you can’t voice chat with strangers (only friends in private matches) and it requires you to have the app open on your phone— you can’t switch apps or you’re out of the conversation until you return— and it burns your battery down. I ended up playing on discord, which worked better, but in all reality you don’t really need voice chat to do well as a team in Splatoon 2. What the app does right, though, is show you what stages are live, what’s next, all your stats from the last 50 games, and you can buy gear from a store. I find it funny that when Splatoon 1 was on the Wii U it demanded that you play with the gamepad, yet all it served as was a map— which has been replaced by a button press on the Switch and works just as well— but I never did anything interesting with the second screen. But on the Switch, with the Nintendo Online app, I’m doing more on the second screen in-between rounds than I ever was before. Once again this lack of utilization of the gamepad had a lot to do with why the Wii U never made a lot of sense. 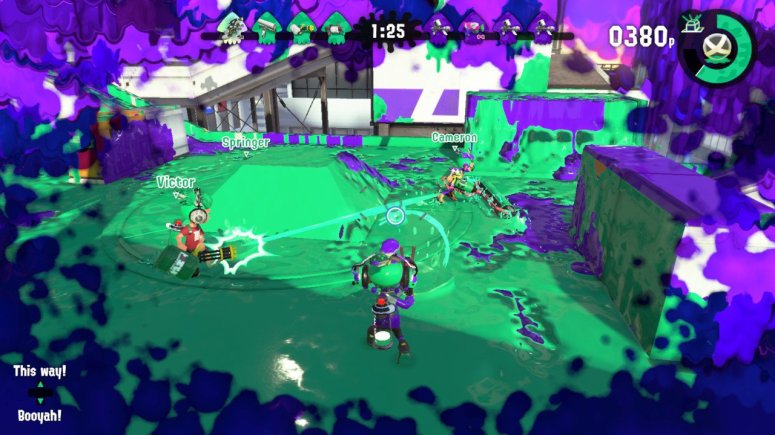 There’s some strange matchmaking decisions in Splatoon 2 that may annoy some more than others, but for me it wasn’t enough to change my feelings about the game. Specifically, you can join a friend’s game (in Turf Mode), but you can’t group with them so you have to wait for their round to be over to get in. Then, the game will randomly split the lobby up across the two teams, meaning you can’t always be on the same team as your friend. While this sounds annoying, in actuality, it’s a lot of fun not knowing what team you’ll be on and mixing the cooperative with the competitive in a friendly way. Private matches allow you to designate teams and rules, but you’ll have to have a lot of friends who own the game (something I think will improve over time). Another strange omission is the ability to play with friends in Ranked games, which provide the Tower Control, Rainmaker and Splat Zone modes. I’m guessing this is because they want the teams to be fair, and not have a group of Splatoon friends come in and tank the balance. I’m not mad about it though. Same goes for Salmon Run, you can’t play it every day as it has specific time schedules. I like the exclusivity that provides, and ensures you’ll always have full lobbies and feel motivated to get some of the higher end rewards.

Splatoon 2 is a must-own Switch title, and really shines with the Pro Controller. While you can play with the two Joy-Cons, the analog sticks don’t have as much nuance, and in a hectic shooter like Splatoon 2, it really helps to have the more forgiving feel of the Pro Controller. That being said, Splatoon 2 does offer tons of customization for both TV mode and Handheld mode sensitivities, which can be saved independently of each other, which was a thoughtful inclusion. I was particularly impressed with how much felt tweaked and improved and how slick the whole presentation was this time. If you are on the fence, but have a Switch, you’re doing yourself a disservice not purchasing Splatoon 2. And if you don’t have a Switch yet, between Zelda, Kart, Splatoon 2, ARMS and Mario in October, now is the time!

+Nintendo level of polish is amazing

+Lots of stuff to do

+Gear and Abilities and Tickets oh my!