With the Starks heading Southeast towards the Baratheon’s at King’s Landing, and the Tyrells fighting the Martells over control of the south, the west of the continent belonged to the Lannisters as they tried to fight off the Greyjoy raids… until they left their shores undefended and found themselves brought low at their home in Lanisport.

That was just one turn of this game, with plenty of events and plans shaping the world of Westeros in this long term strategy from Fantasy Flight. With Game of Thrones coming back on the air, I thought it would be a nice time to examine their take on Game of Thrones.  It promises to be a sublime strategy, with victory impossible without cooperation, but victory only allowing room for one house.  Is it really that good however?

Let’s start with a very important aspect of board games, Presentation.  As this is a Licensed Fantasy Flight game, you’d be correct in assuming that all the tokens are well made and convey clear information, all the pieces are made of good quality materials and look the part, the board is well designed and fits the theme quite well, and all the cards and other aspects have wonderful illustrations on them.  Truly they took their time making sure this game would at least look like you were trying to conquer Westeros.

The next aspect to consider would be its gameplay, and how fun it really is to play.  Seeing as this is the spiritual successor to one of (if not the best board game ever in my opinion) Diplomacy, it features moments of intense consideration, and careful planning amid all the chaos.  Similar to games like RISK, the goal of the game is to order troops around to take a certain amount of territories.  However, more similar to Diplmacy, all orders are actually issued simultaneously to all units, with the order of their activation depending on the Influence Tracks.

The Players have finally sorted who’s going to play who, and have begun the game.  The first thing they do is look over their available order tokens, and begin placing them face down on the board, one per territory they have troops in.  Once all players have placed their hidden orders, they are all revealed, signalling the beginning of the round, with Raids being gone through first, then March Orders, one after the other until all are resolved. 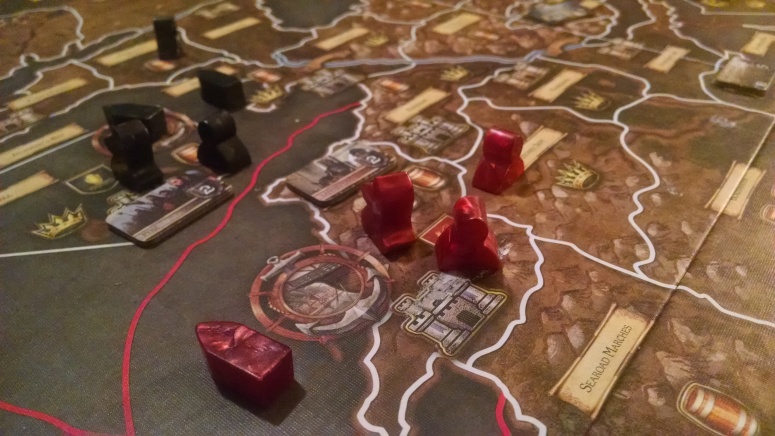 We’ll cover the Influence Tracks in a moment, but first the main use for your forces is of course combat.  Unless using the Tides of Battle cards, battles in Game of Thrones are won solely based on army strength.  An Army of strength 5 will always beat an army of strength 3.  However, whenever players must fight each other, they must also use one of their House Cards.  The House Cards are important characters from their house who add combat strength and even add abilities in the fight.  Since it’s merely numerical, pure strategy is used to win this game, not just the luck of the die, and in my opinion that’s just dandy!

However, what puts Game of Thrones aside from other board games like it is the Influence Track, and the collection and use of Power.  In the game you can collect power tokens from territories you own, and you can then use these to hold down territories without troops, Strengthen the Night’s Watch against Wildling Raids, or most importantly, use your power to bid on the Influence Tracks.  The Influence tracks determine several things in the game.  Chief among them are Turn Order(Iron Throne Track) Military Tie Breakers(Fiefdom’s Track) and Access to special Orders(King’s Court Track)  With the head of each track being granted a special token they can use signifying that they decide all non military ties, may add +1 strength to their combats, or may change an order after all are revealed.

All these aspects, combined with a perfectly claustrophobic board design leads to some of the most enjoyable gaming experiences I’ve ever had.  The only downside to Game of Thrones is it’s not a game to be played by beginners to the strategy genre as some of it’s concepts will be especially hard to grasp without some prior experience in games like RISK.

Game of Thrones: 2nd Edition Gets

+An Easily Tense Atmosphere, and a Challenging Game For All Players

+The Focus on Cooperation and Betrayal Mimics the World of Westeros

-The Game is Extremely Unfriendly to Newcomers

-The Game is Best Balanced With 6 Players

-It Is Easy to Get Butthurt in This Game