My recommendation of Tumbleseed comes with a warning: It takes work to like this game. But aren’t games supposed to be a reprieve from work? Yes, ideally games will whisk you away, help you de-stress and administer a steady shot of dopamine straight to the brain. That delicious feeling of reward is there, but only after much determination to master the controls. That’s not to say you won’t be able to appreciate the game the moment you start it up— the uniqueness comes to life immediately— it just won’t click unless you’re willing to put in the time.

But it’s worth your time, because Tumbleseed is a thoughtful, original take on the Roguelike genre. The goal is simple: Roll a seed up a mountain, avoiding pitfalls and enemies, and reach the top. Controlling it though, is not. Instead of controlling the seed directly, you actually manipulate a plank that floats at the bottom of the screen. Using the left and right analog sticks to raise the plank up or down on either side, the seed will obey and tumble back and forth. At first, you’ll have little nuance and fight with it, sending the seed careening. Thankfully, the Nintendo Switch HD Rumble support is fantastic and really helps you gauge your momentum. 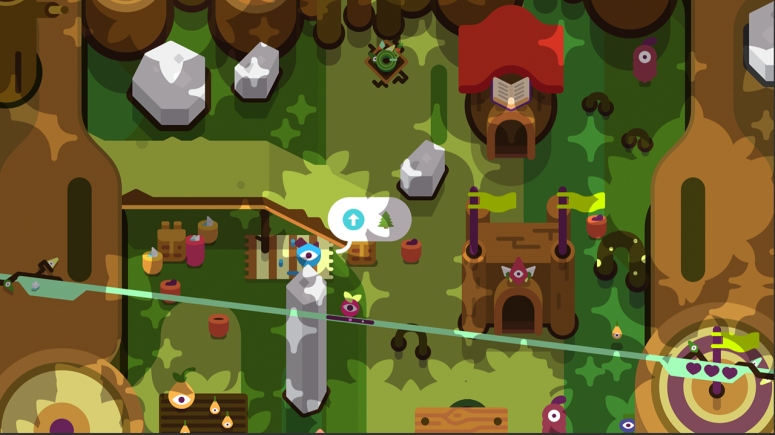 While there’s a short tutorial area, it’s absolutely nothing compared to the real climb. Almost immediately you’ll do something stupid, like roll right into a hole. It’s going to happen. Upon losing your final heart, the seed floats back down to the starting area where you can shake it off and try again. Additionally, Tumbleseed grants a restart button in the pause menu with zero wait time— your climb begins again immediately. The instantaneous act of trying again goes a long way to build the case that dying is designed explicitly to be a core component of building skill. Literally and metaphorically, the lessons you learn help you climb higher.

Once you stop fighting the controls as much, then you can dig into the strategy much more. I found taking missions from the NPC in the starting town to be the most rewarding way to become competent at climbing the mountain. The main mechanic becomes what seed to plant on the numerous soil beds along the way up in the various environments. Beginning in the forest, you can choose to plant heart seeds to increase your health, checkpoint flags to respawn at if you fall in a hole, or a seed that yields crystals. And you need crystals because everything costs crystals. Weapons, like spears or plantable turrets, will combat the various bugs, worms and winged creatures that you’ll come across along your climb. Some enemies will track you, others will just bounce around lost in their own world. The further up you go, though, the more aggressive they become and the more pitfalls to avoid. So experimentation with weapon types, when to play offensively and defensively becomes the second main hurdle of mastering Tumbleseed. The weapons almost all have negative consequences too, whether they cost a lot to use or they could inflict damage if mishandled. If I had one main complaint, it would be that having to worry about your own weapons hurting you sometimes seems just too much.

One of the most successful aspects of the game is how each run is randomized, but not so much that certain runs are unfair and others are a total breeze: The levels are composed with balance each time you play. Whether it’s a jungle, desert or snowcapped mountaintop, Tumbleseed weaves these levels together with beautiful ambient electronic music. From a game concept to execution, Tumbleseed nails every move it makes. While it may take too long for some to wrestle with the controls, and others may be turned off by its unforgiving nature, those that roll with the punches will find the mountain well worth climbing.

+Music and sound effects worth throwing on headphones

-Controls are difficult to master

-Can cross the fine line from very difficult to brutal