Real Talk by: Cmack The Don

You don’t have to be a comic book fan to know that Marvel is one of the biggest forces in the entertainment industry right now, expanding past well-known characters such as Spider-Man and the X-Men into Iron Man in 2008, who started the Marvel Cinematic Universe, which has now found its way onto Netflix, with 4 exclusive 13 episode series about characters that fans of live-action only material may have only heard of for the first time.

Daniel Thomas Rand K’ai, also known as Danny Rand, or Iron Fist, is the most recent in a long line of powerful warriors from a mystical city known as K’un L’un. Aside from being able to summon his organic energy into powerful feats of strength and skill, he is also one of the Marvel Universe’s most highly trained and deadly martial artists, being able to go toe-to-toe with or even defeat characters such as Daredevil, Wolverine, Captain America, and even Colossus. In a list of the top 10 hand-to-hand combatants of the Marvel Universe, you would be mistaken to leave out Iron Fist, and or maybe even a top 5 list. You will not get that impression watching Iron Fist on Netflix.

Before we get back to the martial arts, let’s look at the story. After all, that’s the point, right? Iron Fist suffers from over-bloated episodes and storylines that don’t pick up until the final third of the 13-hour run-time. Perhaps there was a contract or agreement that forced them to have this many episodes per character, but Iron Fists’s initial story arc of returning to America shouldn’t really take more than 6 episodes of this length. I personally think that the story could be effectively told in a higher-budget 2-hour movie, even. 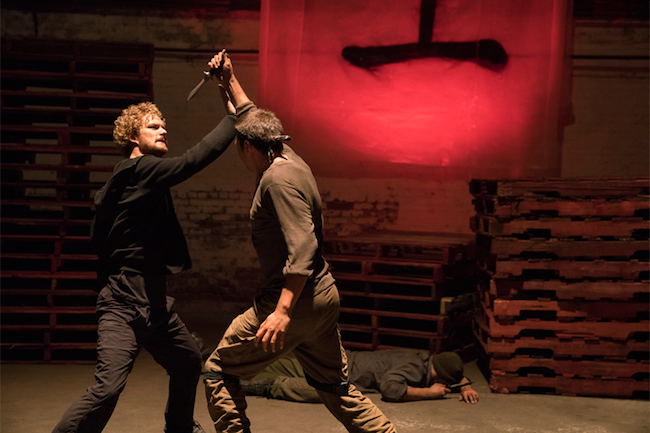 Every Marvel Netflix series explores a “darker”, “grittier” side of the MCU, with The Avengers and connected films being more PG-13 and family friendly, with the Netflix shows tackling serious social issues and showing more dramatic, intense situations. There’s nothing wrong with that, and for characters with really complicated themes like Daredevil, The Punisher, Jessica Jones, and Luke Cage, it works. But for a character who has literally fought a dragon with his bare-hands and is clueless about much of modern American life, the intense themes they try to insert feel forced and out-of-place, with more time often being devoted to family drama and board room politics than the development of what would’ve been a great character and a welcome change of pace.
Corporate corruption, mental illness, poor mental health treatment practices, and drug abuse are serious topics that should be talked about and featured in media, and you can make some intense drama and good storylines from each of those, I just don’t think those issues need to be featured so prominently in something like Iron Fist. In the comics, all of these issues are there for the most part, but they only color things and help add dimension to the characters and action. On the Netflix show, these elements distract from it, not add to it.

Often, Iron Fist’s very interesting origin and upbringing is talked about and mentioned, as are other potentially cool elements of the story, but rarely, if ever, shown. The show and characters don’t know what or who they want to be, with some episodes featuring an attempt at showing martial arts culture, jarringly switching to scenes focusing around mental illness and back, without a smooth or seamless feel to any of it. This shift in tone and characters is constant, and if it was intentional, it does not work.

After finishing Iron Fist, I thought of one of my favorite movies growing up: The Last Dragon. Made in 1985, it features a skillful, but naive young martial artist trying his best to live honorably in modern times. He gets pulled into having to take on two villains: a corrupt businessman and an evil martial arts master and their cronies. With the help of a beautiful singer and his fellow martial artists, he takes on the badguys and masters “The Glow”. The Glow is a supernatural energy only the most skilled martial artists can tap into, increasing one’s strength, stamina, speed, reflexes, and allowing the user to hit with literally explosive gold-colored energy. What does this concept sound like?
I would not be shocked at all if writer Louis Venosta was inspired by the Iron Fist comics that were in full swing in the 80’s when The Last Dragon was written, but now, it’s Iron Fist that should be taking inspiration from The Last Dragon. The colorful and charming film is a blueprint for exactly how you would handle a live action Iron Fist. The lead character, the villains, the setting, and the powers are all very similar. To make it fit with Marvel, you could tweak some of the tone and update the setting and music, but that same core feel of fun and earnest presentation should stay the exact same. The Last Dragon perfectly balances martial arts and urban cultures, showing both with respect and humor at the same time, while featuring funny and memorable supporting characters and genuinely good martial arts choreography. Bruce Leroy is almost an exact template of what Iron Fist should’ve been: wise and kind, but he still hasn’t learned everything yet, still makes plenty of mistakes and has to grow, but isn’t so uncertain and inconsistent as Finn Jones’ Danny Rand. Leroy has all the workings of a great hero, and even though he’s still new to being one, he shows that he has a lot to offer and wisdom beyond his years. Iron Fist relies too heavily on the convention that “he’s just starting out” that is all too popular in origin stories now, and when they try developing him, it feels like too little, too late. 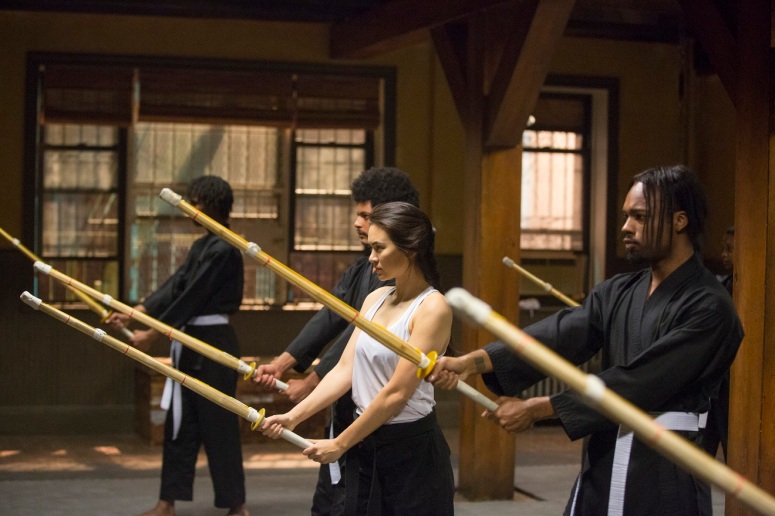 Iron Fist isn’t all terrible, with much of the cast doing well in their parts, despite the material being disjointed and having their characters act at extremes often. The sets and locations are all mostly very well done and look great, and the effects are serviceable considering the lower budget than the MCU feature films. Jessica Henwick truly stands out as Danny’s partner Colleen Wing, bringing honesty, dedication, and a good physicality to her part. Ramon Rodriguez is a welcome addition to the cast when he shows up, being genuinely friendly even at his most evil moments as the charismatic cult-leader Bakuto. Sacha Dawan does well as friend turned-rival Davos, and despite not looking like the musclebound character from the comics, adds his stage-acting experience and skill to a part that on paper could’ve been very bland. Rosario Dawson and Wai Ching Ho are both great as always in each of their re-occurring roles as Claire “The Night Nurse” Temple and Madame Gao. All of the rest of the supporting cast do well and all have watchable moments, including Jones, who is not a terrible actor, just terribly cast.

I don’t mean to be insulting to him, because Jones quit Twitter because of the backlash of his casting and has received a lot of negative press about it, and I feel it’s more of the casting director, producers, and set directors that lay at fault for his performance. He’s just doing his job, after all, however he never should’ve been cast in the first place.
There’s no getting around it: Iron Fist is a very physical hero. He can only summon his powers a limited amount of times per day and has a limit on his energy. He is not all-powerful like Thor or Superman and has to be creative and restrained about his powers, and so that high level of training I mentioned earlier is supposed to be what serves him through most of his adventures. Martial arts is very important to the character of Iron Fist, and not simply just one part of the skills he has, like Batman or Daredevil. Aside from a few other characters like Marvel’s other main martial artist: Shang Chi, he is one of the heroes most steeped in martial culture, with very specific technique and style to his approach, and not just general, whatever-works fighting.

To sell all of that to audiences, you need an actor with an undeniable physical presence, because even in 2017 with special effects being where they are, you cannot fake or computer generate actual physical ability (yet). If Finn Jones was doing something so incredible with his portrayal of the character, I could see pardoning them not casting anyone with any martial arts experience, but his portrayal is only alright, and anytime he fights it just does not look right, leaving you with a character that just feels overall incomplete and not strong enough in any way to carry a Marvel Comics show.
Iron Fist and his powers and abilities are very inconsistently presented, in some episodes he’s able to bring down special forces members and whole rooms of gang members, and in other episodes, a single character with a knife or similar weapon is able to force him to use his powers, with little to-no explanation as to why this is. His powers are similarly inconsistent as well, with the show missing the opportunity to explain him developing them and putting that material into the background in place of corporate proceedings and lengthy family drama. What comic book fan would want to see a powerful martial artist take on a living dragon after completing a deadly tournament, when you can have scenes of meetings instead?

I think the best way to sum up Iron Fist is in comparing it’s opening versus the opening theme of the other Netflix shows. Each of the Marvel Netflix shows have colorful openings with memorable music that represent their characters through sound and music. Daredevil has a determined, moody score that shows a city founded on blood and corruption, and one man against it all. Jessica Jones has a shrill, cutting symphonic rock soundtrack in its opening that shows her observing what’s under the surface of seemingly safe situations and exposing the truth. Luke Cage’s opening is proud and bold; It shows through sound and image that he is the literal physical embodiment of his neighborhood and culture, that it gives him the strength to punch through any obstacle holding him back. Iron Fist? A dull, colorless opening with droning music that sounds like it was meant to fill the place of a real theme. Even though the opening shows martial arts moves, it’s all so lackluster and without feeling, the figure doing them being entirely constructed out of CGI, with no real style of impact to the gray, bleak surroundings. It’s not awful, it’s not the worst opening ever, it’s just low-effort and feels tacked on, just like the show itself. There was a good show in here trying to get out, and they didn’t have the focus or talent to really make Iron Fist shine like the gem it could’ve been in Marvel’s growing crown.

For being standard and indecisive, I give Marvel’s Iron Fist on Netflix a generous 2.5 MFs out of 5. Here’s hoping he improves in The Defenders.

+ Key Characters from the supporting cast