Nintendo’s launch has been dominated by all things Zelda, but that’s not the only game worth playing on the new hybrid system; The Binding of Isaac: Afterbirth + is the definitive version of the 2011 classic and feels right at home on Switch. I know what you’re thinking, yes you can play versions of this game on pretty much every platform, what’s the big deal? Well, for one, this has every update and DLC that has released in the last 5 years, but also, it works extremely well as a portable game. It supports up to four players, which means you can have two players right out of the box on Switch, anywhere you go. Last but not least, the physical box release includes awesome stickers and a color manual resembling the look of the original NES Zelda instructions. 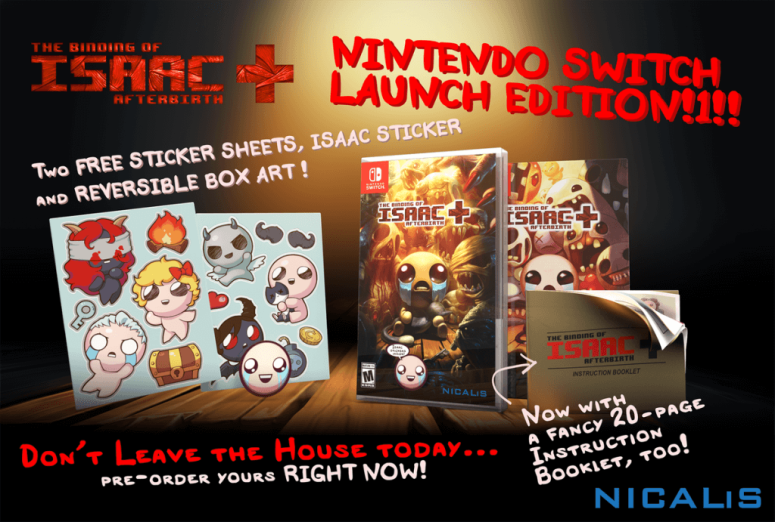 While Breath of the Wild looms over the beginning of 2017, there’s no escaping the influence of the original 1986 adventure on this action shooter. It’s everywhere you look: The dungeon-like square rooms complete with enemies and hazards, the keys used to unlock doors, bombing walls with cracks, the boss waiting at the end of the maze. While Nintendo moves away from the traditional dungeon formula, The Binding of Isaac: Afterbirth + finds excitement returning to it. What’s interesting is how beautiful of a blend the traditional Zelda dungeon formula makes with a twin stick shooter. Add to that the 11,000 + unique room configurations, over 600 different items, 180 enemy types, 90+ bosses, and daily challenges, there’s a ton of content here that continually opens new and interesting gameplay mechanics.

This is not a game played for story, but there is a bit of context to the rogue-like madness. You play as Isaac who runs into the basement after narrowly escaping his mother’s murderous oppression. His mom, a Christian extremist, feels that God has divined into her life and commanded her to kill Isaac. As Isaac travels deeper and deeper into the basement, and then beyond into even weirder environments, he’ll face all kinds of gross things. Poop monsters, creatures that leave bile trails, phallic and vaginal-like creatures with razor-sharp teeth who vomit blood. If it wasn’t so cartoon-like half of the game would probably have never been approved for release. In fact the themes are uncommonly edgy for a game so devoid of actual substance, and at times it can feel juvenile. 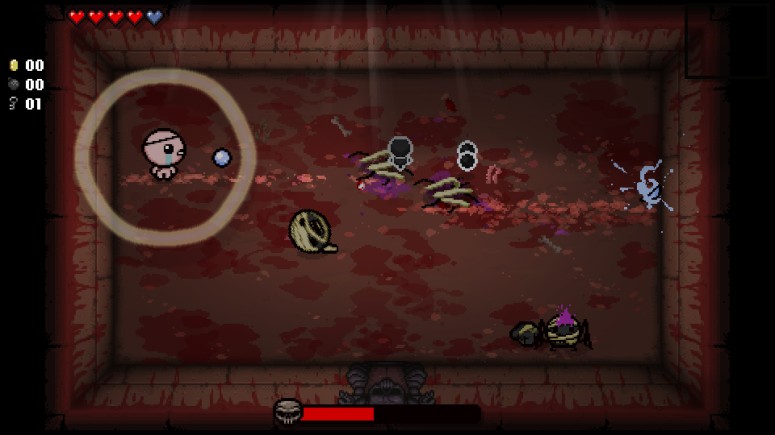 That is largely the point, though, as in many ways you’re fighting the manifestation of the fears inside a young boy’s mind. The gross creatures resembling crude drawings made during a particularly boring day in math class, a distraction from the impending dread of growing up. And what better medium to express these fears than with a video game that resembles a nostalgic period of time in gaming’s adolescence. The Binding of Isaac: Afterbirth + manages to be thought-provoking purely in the aesthetic that the gameplay is wrapped up in, which is a huge design win. What’s especially funny is when the gameplay sucks you in so much that you no longer register that a giant sliding turd just killed you, instead you pound the A button to retry, not wanting to waste a second to get back in.

There are some things about The Binding of Isaac that has always bothered me, and this version isn’t immune. There’s an unsatisfying sense of luck that plays into how well you do and you’ll find that some runs are just absolutely cursed from the start. But, the game allows you to save level combinations so if you find an especially balanced run through, you can play it again simply by entering a code. In later levels, when you’re fully powered up and there’s tons of enemies to kill, it’s hard to see what’s happening on the screen. I also wish there was a multiplayer mode where you could have two fully functional Isaacs, because as it stands only Player 1 gets to pick up items, upgrade their character, and interact with the environment— the secondary characters are more like helpers. Finally, while you can play with a single Joy-Con, it feels cramped when trying to use the bumper and trigger buttons in that configuration. 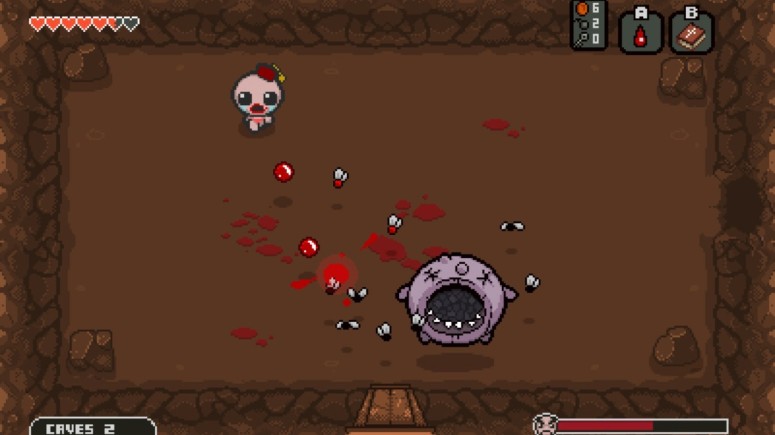 I would give The Binding of Issac: Afterbirth + a solid recommendation to anyone, regardless of platform, if you are looking for a challenge, dig retro games, shooters or Zelda. But most of all, this is an especially good buy at $40 for early adopters of Nintendo Switch. I had played the vanilla build with no DLC content, and to step into this version after so many years feels just as compelling as the first time I played it. If you do not have a Switch, definitely check out the version available on your platform as there’s usually some good deals every once and awhile. If you have a Switch, consider buying the physical copy for the extra goodies (if you’re into that), or simply download it as it doesn’t take up much storage space. The Binding of Isaac: Afterbirth + is one of the best indie games in the last five years and feels right at home (or on the go) on Nintendo Switch.

The Binding of Isaac Afterlife + Gets

+Feels at home on a Nintendo platform

-Controls are a bit cramped on a single Joy-Con, but doable 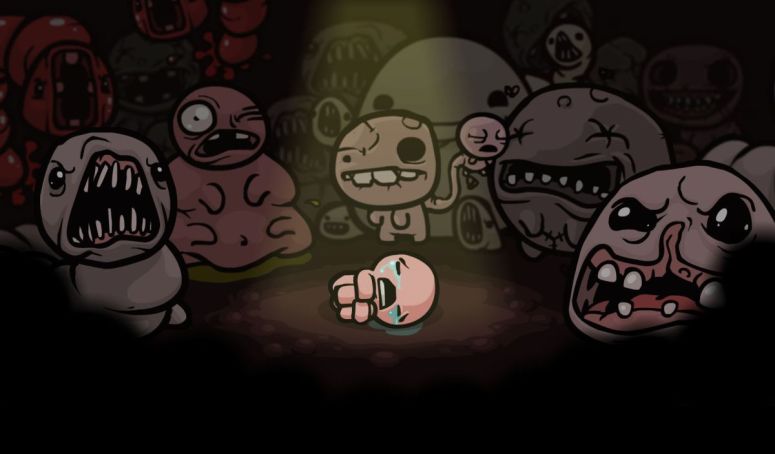 One thought on “The Binding of Isaac Afterbirth+ Review: An Isaac to the Past”