What does it mean to be a Final Fantasy fan in 2017? I kept thinking about that question as I played the latest entry in this long-running series. Even as the end credits rolled, I still didn’t have a solid answer. While Final Fantasy originated on the NES, most people will say it was FFVII on the Playstation that hooked them. By the time the PS2 became the dominant platform, games were changing, budgets increasing and turn-based combat was definitively a niche genre. After Squaresoft merged with Enix the series would zig-zag between attempts to modernize gameplay and capitalize on popular gaming trends. With the success of Ultima Online, then World of Warcraft, Square Enix released a MMO game in the Final Fantasy universe to decidedly mixed results. It became clear that Final Fantasy had in many ways lost all sense of direction, and also split it’s fanbase across the divide of games and years in between. 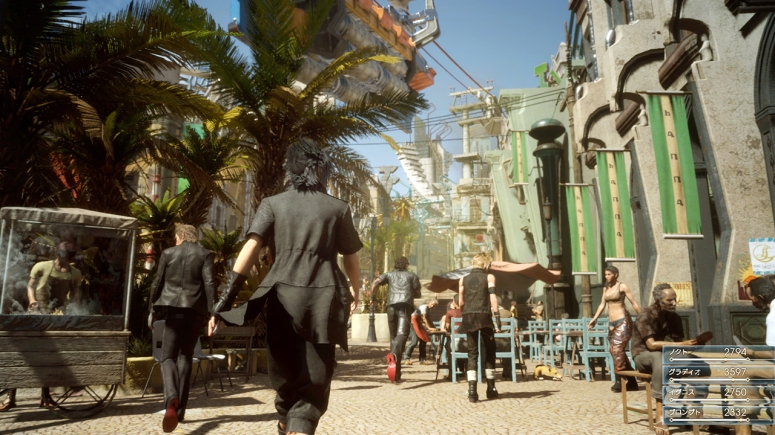 So here comes along FFXV, a game that has been teased for years as the savior of the series. After playing it for over 80 hours, I can attest that it is both a return to form and an evolution of all the manifestations that the series has gone through over the years. But with every sure-footed move Square Enix makes with their latest magnum opus, there is an equally shaky counterpoint that cannot be ignored. FFXV is a game of conflict, within the story, the characters, but also in-game design and focus. Never have I felt so conflicted while playing a game, to the point where it feels like an out-of-body experience. I’ll be playing and having a blast, but at the same time, I’ll be deeply annoyed and frustrated. It splits my feelings right down the middle, and oddly, becomes engaging because how much of a mess it turns out to be. This is incredibly hard to explain, but essentially, my feelings are as convoluted as the very timeline the series has taken.

So instead of diving into a couple paragraphs about the characters, and the story, I would rather take this review in a different direction. You can find all those pieces of information anywhere. Instead, I broke my split feelings into a list. There is just no other coherent way to talk about all of this. So here’s some things that FFXV does great with their negative repercussions:

+ You can spend easily 40 hours in the beginning part of the game taking quests and exploring, not worrying about the story and building up your party.  The game encourages you to do this.

– But, If you do that, by the time you take the story missions, you’re totally over powered and everything becomes about how fast can you run from point A to point B to erase everything in your path.

+ There are so many places to go and see, and the game has a really unique Western meets Eastern visual aesthetic with Diners, Motels and farmer’s markets.

– But, you soon realize that almost every Diner looks the same, and most buildings you cannot enter, and the npc’s all basically sell the same things regardless of what they look like.

+ You can drive a car to travel quickly, you can ride chocobo to traverse the many forests and deserts, you can even upgrade them over time by completing missions and obtaining materials. 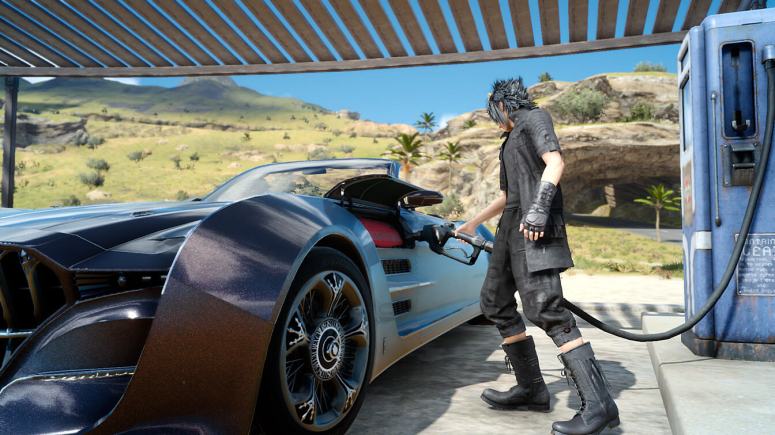 – But, you can’t actually control the car, other than forward and backward, and in many cases you can’t skip long travel times and you’re forced to watch as your car slowly drives across the entire map. The chocobo are great for getting off-road, but you can’t pick up any items you see on the ground, so you’re constantly hopping on and off while exploring. And you arbitrary have to pay for how many days you want to use them for, and if your time runs out while you’re out and about, tough luck now you have to run all the way back!

+ You can fish, and there’s tons of different tackle and bait options, and you can cook meals with tons of different properties that can help you as you fight and level up your party. Each of these are skills that as you use them they increase in their effectiveness.

– But you can’t just walk up to water and throw in a line, only certain spots that are visually indicated can be fished at. And it takes so long to fish and there’s no substantial benefit to doing so that you can’t get from many other items in the game. The cooking, strangely, you can only do at campsites, and the camping gear is a real-world advertisement for the “COLEMAN” brand, which is jarring, and if you stay in a nice expensive hotel room to buff your XP growth, well, apparently none of them have kitchens and you cannot cook meals.

+ The game gives you powerful weapon upgrades for your main character, Noctis, at a fairly regular pace, and there’s an elemental system for spells where you can create your own combination of elemental attacks. 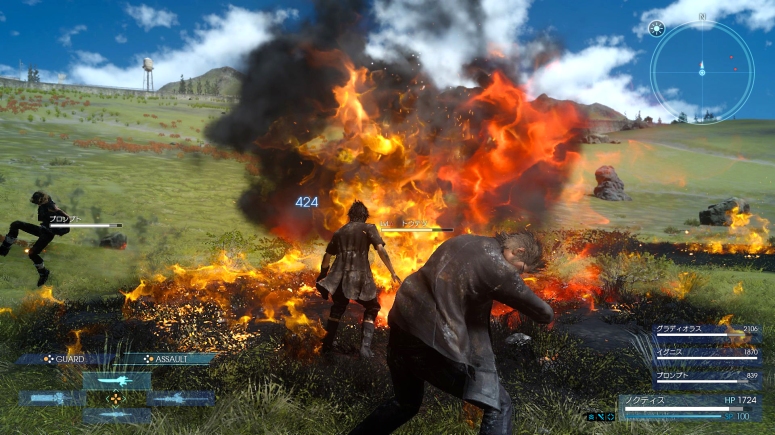 – Then you realize that these weapons all have serious drawbacks, that make them fairly unappealing to use, and that to make elemental attacks you have to go through multiple menu screens to even create them. Then, using an magic attack just once means the slot is empty, and you only have four slots, so it’s way less annoying to just use weapons that don’t leave your loadout.

+ Final Fantasy games always make a big deal out of summoning massive creatures or spirits to fight alongside your team and FFXV has the absolute most cinematic and biggest summons in the series history.

– Which is why it sucks that you only use them a few times in the whole game and they act more as a cutscene to end a fight and less an actual weapon / skill that is used strategically.

+ While the first half of the game is open, and it trains you to go at your own pace, you quickly find a good balance between progressing the story and getting lost.

– Until you hit a certain point in the game where it abruptly tells you that you cannot go back and then the remaining chapters and hours are a completely linear affair, with it never allowing you to return until the story is completed. This leaves most things totally pointless to go back and interact with other than for pure completionist purposes.

+ The interaction between the four buds is a total endearing bromance, and are probably the best characters Final Fantasy has created in over a decade.

– But, all the other characters in the story have either completely unresolved story arcs, no story arcs, or are completely two-dimensional and act no more than scenery to your adventure.

To put it simply, every good idea comes with an equally frustrating or confusing result. But how that impacts your overall experience is not that simple because here’s the thing; I still enjoyed my time with FFXV. While I can’t ignore my issues, there’s something still deeply compelling about this adventure when taken as a whole. I kept coming back, loading up my save, and having fun and that’s a success in of itself. Each time when you boot the game up it reminds you with an onscreen message that it is a “Game for fans and new-comers alike” and feels truly odd that they felt the need to say that. After all, if you weren’t convinced to buy it, you’ll never see that message, so what is it for? I see the message, and the game itself, as a statement of intent. This is what Final Fantasy looks like now, and if you endure through it’s internal conflicts and you finish it, you’re what that fan looks like.

+Compelling personalities in your party that are multi-dimensional

+Always something to do

+Refreshing take on friendship and male-bonding

-Confused pacing, gameplay elements are conflicted with themselves

-Too easily overpowered for the main story quests 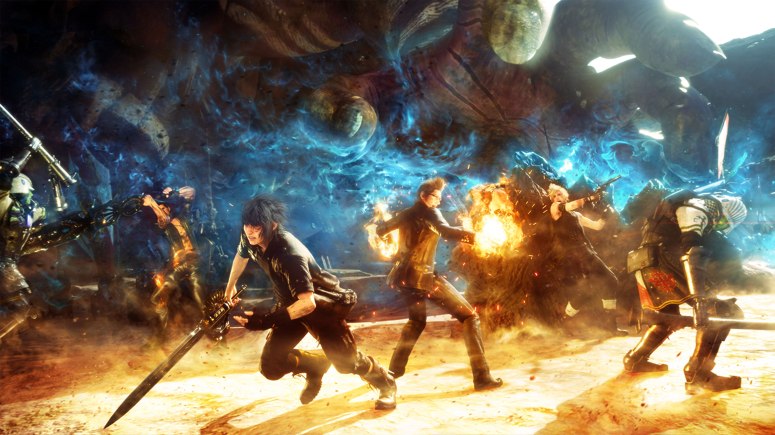 One thought on “Final Fantasy XV Review: An Epic Divided”