This week, I’m going to be doing things a bit differently.  I was thinking of going over another type of game that people usually look over, and that is the board game.  There are so many games that aren’t just Monopoly or Sorry!  Games that can be fun and engaging without just being a time waster.  So, with that in mind, it’s time to go over a game, that I think, is a good bridge between video and board game.

The last one mentioned ‘updating the board’.  Well, X-COM works by having it’s players work together against an A.I. on a free App you can get on your mobile devices.  The App shows where UFO’s attack, Spawns Enemies, and determines the flow by directing which phase goes before which. 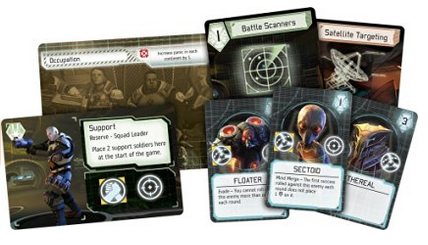 So, these are the basics of the game, X-COM trying to work together to stop an Alien Invasion of the entirety of the Earth while the App is trying to make things miserable for players and just like the video game it’s based off of,X-COM doesn’t pull any punches.  Brace yourselves, but this is a board game that, despite all your best efforts. The Players can all lose, and rather spectacularly as well.  In fact, personally, I’ve lost this game more than I’ve won it.

So that’s nice, but is it any good?  Time to Elaborate.

Let’s first start with the app.  It was made by Firaxis, so it is actually especially functional, and if you can hook it up to any speakers, it also adds the perfect soundtrack to listen to while playing the game.  This is good because the App will be determining the flow of play and needs to be clear.

Next, the roles and their balances.  Each role actually has a massive responsibility and several functions. Whether it’s the Head Scientist trying to figure out which upgrade would be best for the group while trying to keep their scientists under budget, or Control doing their best to boost their friends while making sure to keep the board properly updated.  In short, each role is important and no player feels like they aren’t integral to the success of your team. 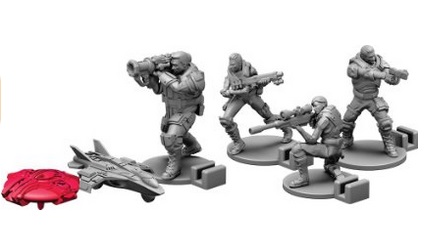 How about Game Pace and feel?  X-COM, after the first active phase (The phase in which the app is timing you) becomes intense.  The feeling that you, as a group, are suddenly the underdogs is now obvious at this point, and every victory from here on out, from the small to large ones, are something to celebrate.  Then, when the active phase is done, the resolution phase(which isn’t timed) is settled.  Letting players take a breather if they can handle the stress of watching their plans succeed or fail.  The game continues in this manner until the world becomes too panicked(X-COM Defeat), X-COM base is destroyed(X-COM Defeat), or almost miraculously, the final Mission is successfully completed (X-COM Victory).  In short, the pace is frantic(Yes, even though it’s a board game) and the atmosphere is tense and even stressful at times.  This game may not be for the faint of heart or anxious.

Finally, we must talk about the logistics of this game.  Tons of pieces, cards, and even a set up period may discourage those new to proper board games, but if you’re playing with someone who is used to such things they can easily help you out through your first playthroughs.  Otherwise, I’d recommend starting off with a smaller game.

In Closing:  X-COM is somehow a fast paced board game, with tense moments, almost stressful alien attacks, and if victory is found the sheer euphoria of it all is some of the best group experience I’ve ever felt in a game.  However, the elephant in the room here is some of the RNG(Random Number Generated) elements sometimes hamper progress.  Sure it adds to the weakness X-COM has against the alien invasion, but sometimes it is simply unfair, and a long series of bad rolls can make or break a game.

XCOM The Board Game Gets

(However, if one is unfamiliar With board games like this, it should be considered As a 3.5 or lower.)

+The Game is Consistently Tense and Engaging

+The Pieces, Board, Cards, etc. Are High Quality

-The Game Has a Massive Set Up Time

-Not Recommended for Friends Who Can’t Take Defeat Well

Note:  Is is a game that accommodates up to 4 players, now it’s possible to play with less, but 4 is definitely the best number to work with