RIGS puts you through a long tutorial sequence.  Players will certainly know the ins and outs of control, since this is a forced guide.  For someone who’s played countless multiplayer oriented games, my patience was dwindling.  Admittedly, certain aspects were useful.

Aiming and shooting is a mini game in-itself.  Point the reticle at enemies with player head movement.  This method didn’t feel clunky, and I was very surprised by just how intuitive it was.  The game overall is more accessible than one would think (reason why the tutorial is far too long). Controls may not work for everyone in RIGS, but they did for me.  Machine movement is used with the PlayStation 4 Controller.

Continuous plays earn points which can then be earned to unlock different helmets, suits, and Sponsors.  With the right people backing you, it’s easier to unlock high-end items, most importantly RIGS.  Classes include Speed, Power, and Hover specialists.  Depending on the game mode, it’s best to mix things up.

While there’s online play, you can get the full experience offline as well.  The AI is very solid.  It will give you some tough competition, and teammates will do their job.  It is possible to unlock even better allies.  Three match types in total are playable in this $49.99 game.

Endzone acts as a football mode.  Carry the ball to the other team’s zone.  Stop the opposition from doing the same. Destroy their RIG, and take the ball.  This turns into a contest of hot potato real fast.

Powerslam was my favorite.  Destroying enemies and collecting their orbs puts your RIG into overdrive.  Once this happens, go to the center of a map, jump in the circle hoisted above and score.  It’s like a game of robot basketball.

Guerrilla Included a Team Takedown (Deathmatch) mode as well for those wanting to avoid sport gimmicks.  The small maps are well-designed, allowing for plenty of places to swerve around enemy attacks.  There’s only four areas, so hopefully guerrilla provides fairly-priced (or free) add-ons.

For a title this fast-paced, the game stumbles in a big way.  Long load times hit whether you’re online, or off.  Unskippable videos are shoved in also.  This damages the pacing of RIGS so much that It had to be mentioned.  Also, the jarring gameplay speeds could make some feel sick.  I didn’t have this problem, but have read several reports of this happening for others.

As a VR launch title, RIGS gives players a game that makes you feel like a Mech Warrior, and a participant of this Sports League.  Guerilla Games is really showing their versatility.  Hopefully this franchise will continue.  Up the player count, increase maps, maintain the controls and feel.  Players have a solid PSVR intro that gets competitive and intense.  Just be ready for long waits in-between. 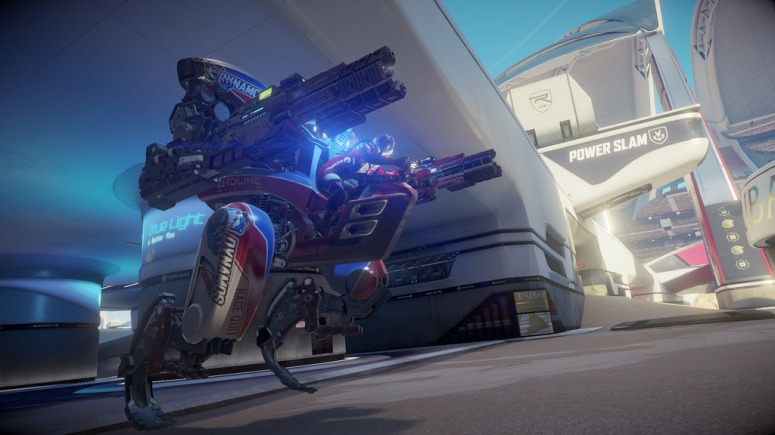