This is a game that I have only recently discovered.  I haven’t played it much, but from my experience with this game, this deserves to be in the top 10.  First of all, it is a multitap game that allows up to 4 players. Second, I cannot think of an earlier wrestling game than this.  This very realistically could have been the inspiration for all the N64 Wrestling games; this game is essentially a simplified Wrestlemania without the license to use WWE wrestlers.  It is pretty fun, though from my experience there could be some balancing issues.  However this is not an issue for most casual players. It’s pretty basic, but also pretty fun.  If you’re feeling like trying something you haven’t played before, by all means, pick this game up.

Kirby’s Avalanche is simply put, a fantastic game.  This game has a player limit of 2.  You don’t really see many great puzzle games these days (don’t you dare tell me Candy Crush is great, Candy Crush is an abomination); this game is easily in my top 5 favorite puzzle games.  If you’re playing with someone better than you, it can be frustrating, but if you’re playing among equals, this game is freaking perfect.  The difficulty level can be adjusted, so if you’re new, you can take it slowly, ramping up the difficulty as your ability improves.  There is also a solid single player mode.  Nothing is more fun than drowning your opponent in a sea of blobs (for lack of a better term, I’m unsure what the official word is for the blobs you use in this game).  If you like puzzle games, you should try this one out.

Bomberman is such a great game that I was surprised to find very few people played.  I told all my friends I got bomberman, the ones who were excited for it were disappointed when they found out I meant Bomberman for the SNES, not N64.  The thing is, Bomberman for the SNES is honestly better, and the 2 games, while similar, play quite differently.  I still haven’t lost a set since purchasing both SNES versions (there is also a third, fourth, and fifth for Super Famicom) because I guess no one played the top down version.  Both Super Bomberman 1 and 2 are fantastic games that support up to 4 players.  It is a game about quick decision-making and tactics.  If you walk into a dead-end you risk getting blocked by bombs, and the ends of games quickly become a battle of strategy.  You always have to be quick about getting power ups.  This game is super fun at parties.

I know I’m going to get complaints for placing Street Fighter so low on my list. If this were an article about competitive games on the SNES, this would be #1. This article isn’t really about how competitive games are it’s more about how fun they are. This game is so good it is still played competitively by many people. There are a bunch of random versions of Street Fighter on the SNES; I’m not entirely certain which version tends to be played competitively. The game is all about skill, and is arguably the best fighting game ever made. The only reason it’s #7 is because I personally feel it gets a little repetitive. You only have a handful of characters and each character only has a handful of special moves, and there aren’t any truly special stages or anything, so I get bored if I play this game too long. Still a great game though.

Tetris Attack is probably my favorite puzzle game of all time. It plays really well, and actually has a decent competitive following. If you watch some of the best players it can be insane, they get x13 combos and can roll over the point meter several times in 2 minutes. There are 2 modes for multiplayer in this, Versus and Time Trial, and both have their own charm. Time trial is good because you’re pretty much trying to top your personal best, where in versus it can be fun dropping blocks on your opponent, though at times it can get a bit ridiculous.  Also even though this article is about multiplayer there are lots of great single player in this game, I still haven’t beaten puzzle mode despite trying countless times. 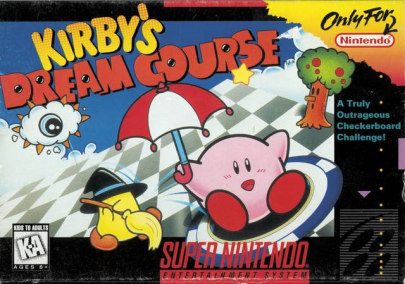 Kirby’s Dream Course is easily the best golf game ever made, which is surprising, since this can barely be called a golf game.  There is a ton of strategy and skill that goes into every game.  You’re always managing your power up, trying to ninja your opponent’s stars, and trying to figure out the best shot you can.  You can play super offensively or just go for getting the courses done as quickly as possible, though I think usually you want to be relatively aggressive.  All the holes are very well designed, and for a SNES game there are a surprising amount of them.  The power up system is fantastic, though there are some power ups that are way better than others.  This game is super fun, and doesn’t ever really get boring.

So you know how I mentioned before about how people think about SNES RPGs? Well what if I were to tell you one of the best RPGs for SNES is a multiplayer RPG, and not even limited at 2 players, but 3?  Well Secret of Mana is the best multiplayer RPG ever made (the only real competition I can think of is the Tales series).  This game has a great story, is super fun, and is actually decently hard (assuming you’ve never played it before, if you’ve played it you probably know some tricks to make it easier).  It is also pretty long and has a lot of extra content in it.  It’s also way more in-depth than most people know about, there’s some pretty crazy stories I’ve heard about things you can do in this game.  If you have 2 friends and want to play a great RPG with them, this is the way to go.

I did mention there are a lot of obscure games for the SNES? This is one of those.  This is a game about fighting robots.  I never knew about it as a kid, and no one I ever mention it to knows about it, but this game is one of the most fun multiplayer games I can think of.  If you like Mech anime, this game is for you, though that is by no means a requirement.  In the multiplayer you take control of one (or more, in some cases) of 6 Mechs and try to kill the other player.  You can also leave your Mech to try to find other Mechs if yours is almost destroyed.  The suits are super varied, and most are well-balanced.

The thing about this game that is super weird is that the multiplayer is the only thing people really care about, but the multiplayer was added at the last-minute to try to make it sell better.  The makers of the game thought the single player was going to be great, but it turned out that the single player was honestly kind of terrible, while the multiplayer was amazing. That’s why the Prometheus Mech is so over powered; he was intended as a boss, but the other 5 were supposed to be relatively equal.  This game is super fun, though it is like 200 bucks now.  It’s worth every penny (or Byte, if you just download the rom like most people do).

So again, I mentioned there being great obscure games on the SNES right? This is another one my friends didn’t really know about but is freaking fantastic.  This is a racing game, but different from any other racing game you’ve ever played.  This game is a 4 player game, but is not split screen. “How is that even possible?” you may ask.  Well that is because the objective of the game is not to finish the race in the fastest manner, but to get ahead of your friends and knock them off the screen.  When a player goes off the screen, they lose that round.  Once all but 1 has been disqualified, the winner gets 2 points, the person in second gets 1, third loses 1, fourth loses 2, and then the race begins anew.  You have to get up to 8 points and win the round where you go up to 8.  It may sound weird, but it’s great.

That’s not the only notable thing about this game.  What’s truly notable is you don’t only race cars.  You can race boats, tanks, helicopters (though I dislike helicopters), dune buggies, and a few other types of cars.  Each type has its own charm. My personal favorite is the boat race.  Each race has its own course, and while it is very important you know the layout of the course, it’s easy enough to remember once you’ve done a course once or twice. This is a great party game.  I highly recommend you play this game. 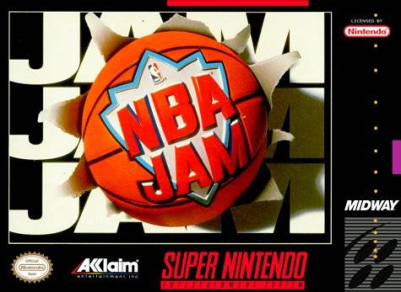 NBA Jam absolutely deserves to be #1 on this list.  Pretty much all sports games on the SNES suck, with the extremely notable exception of NBA Jam.  This game is good with 2 players, but when you get a multitap it becomes incredible.  This game is so fun that they keep trying to remake it, though they never really topped the original.  This is a 2-on-2 basketball game where there are almost no fouls (the only fouls being goaltending and 24-second violations).  Everything is exaggerated in a great way.  If you score 3 consecutive unanswered points your character will become “On Fire”, granting several bonuses.  This game is super fun at parties and just to play in general.

One thing most people don’t know, there’s a ton of hidden features.  Secret characters (I’ll stomp you with Bill Clinton, yo) and special features activated by entering certain initials or by entering combos with your controller. If you’re interested in this, I recommend looking up the list, because there are a ton of them. Play this game. Just do it.

Leave a Reply to The Otaku Judge Cancel reply