Magical Chase is a Hu-Card released for the PC Engine in Japan in 1991, and released for the American Turbo Grafx-16 in the very last day of December in 1993. It was developed by Palsoft, and distributed by a company called Quest. It is said to be the very last English Hu-Card released for the console. This article will be a review of the American version of the game, which I owned, and beat many times over in the late 90’s, and most recently a few weeks ago. Before we get started here is a little excerpt direct from the English manual to get you up to date on the story.

Ripple is a student of magic, her teacher is a terrifying witch.  Ripple’s particularly afraid of her teacher now, because she’s just broken a promise made to the witch.  Ripple took a peek inside the forbidden book Sleeping Demons! No sooner had she opened the cover than out jumper six demons, which raced away! Unless she can catch-all six demons and get them back inside the book, the witch will turn Ripple into a frog for breaking her promise! Ripple sets off on her quest with her two Elf-Star friends, Topsy and Turvy.

Before we get into the full review, we should go over the differences between the Japanese, and English versions. The English version of Magical Chase for whatever reason, received a moderate graphical overhaul. Most notably in the first level. Some of the graphics changed.  The first level instead of having a Lego style foreground, and slimy looking castle background, was completely redone to look like a newer castle. The main character Ripple, also was changed a bit. She now has more animation sequences, and the outside of the shop was changed as well. The PC Engine version shop looks like a rainbow-colored hot air balloon, and in the English version it looks like a hot air balloon, but with a pumpkin for the balloon. The differences may sound like a lot, but really after the first stage the games are near identical.

Now on to the game, Magical Chase is what we would refer to in the gaming universe as a Cute em’ Up.  It is a SHMUP style shooter, with colorful sprites, and cute adorable enemies, that you should feel bad killing.  There is no intricate, complicated scoring system, it’s pretty basic really.  Just survive with as much money as possible, and life. The unique thing about Magical Chase are your two star companions, Topsy and Turvy.  Which to SHMUP fans who may have played Gradius, are a sort of like the options you can collect in-game.  Topsy and Turvy however are with you the whole game, and they always rotate around you, the opposite of the direction you are pushing on the D-Pad. They also shoot in the opposite direction you are pressing. It does get a little more tricky though. They can not only rotate around Ripple, but they can also rotate while rotating around you. So basically if you are holding back on the D-Pad, they will move to the front of you, and shoot in front of you, which is very useful, because they can block some projectiles. Furthermore, they can be locked in place, with their actual rotation still active. So for example, you can lock them in front of you, so you can continue to dodge projectiles, and tap forward, and they will shoot behind you, as Ripple is firing forward, allowing you to cover more ground. Again, there is still more, they can also be locked in place around Ripple, and their rotation can be locked. So if you are in a situation where a boss is behind you, you can lock them behind you, to block projectiles, and have them fire in any direction you choose to lock them into, while giving you free movement to dodge projectiles. Needless to say, it is imperative to learn how to control Topsy and Turvy if you are planning to do well, and going for a high score.

Now besides Topsy and Turvy, you have at your disposal, different items that can be purchased in-game, normally twice per level, to aid you on your quest. By collecting gems you can buy stuff like power-ups for Ripple, and Topsy and Turvy, different brooms, which change your movement speed, elixir’s that fill your life if you take a lethal shot, hearts to fill your life so you don’t waste your elixir, and a few more things like magic spells. It very important that you horde gems during the stages, to save up for all the stuff you will need. You also may need to play the game a few times, and experiment with the weapons you like best, and how to stack your magic, and hearts to regain life, as they are sorted by the order you purchase them. This can be kind of frustrating, because say you want to use a heart, but you bought 3 magic spells first, you would have to waste all those spells to reach your heart. So it can take either skill, or a few attempts to know what order to buy your items, to complete the game. There is also a learning curve when it comes to weapons for Ripple, and Topsy and Turvy. Some of the weapons are just bad. Find what you like, and learn to save up for it, don’t feel it’s necessary to buy every single weapon offered.

Now on to the graphics and music.  The game looks and sounds great.  I love the soundtrack, especially later in-game. The enemies all look good, and have personality.  No complaints there.  The bosses however can be a bit lacking. Some of them look really nice, but some are bland and boring.  Boring bosses would be one of my main issues with the game, along with the magic system.  Everything else is on point.

As for the difficulty, I think it’s just right.  It can be changed before the game starts, and there are 3 levels.  Breezy, Bumpy, and Rough.  With enough practice the game is able to be completed, and even mastered, on all the difficulty settings.

As much as I would love to bash Magical Chase, because it’s cutesy, ridiculous expensive, over-hyped, and various other reasons, I have to say it holds a special place in my gaming past.  It’s just a lot of fun, with a good difficulty, and for some unknown reason, keeps me coming back. It’s one of those games you fire up a few times a year and give it a few hours play.  I would say it is one of those real rare games that get a lot of talk in the gaming community, that’s not just good, but borderline, really good. Now I’m not going to rave that it’s the best SHMUP or game on the TG-16, but it is up there as far as Hu-cards are concerned.  It’s easily one of the better games in the library.  If you are that hard-core collector doing some research on whether it’s worth the thousands of dollars it commands on eBay, that’s easy, it is not. There are better games that can be had.  Actually I think every good Hu-card could be purchased for the price of one Magical Chase. The Japanese version however commands several hundred, around $400.00 right now as of 2016. Is it worth the value? No, and again for the same reasons, there’s just better out there, and for much less. Now is it worth it for the $70.00 it costs for a Krikzz Everdrive? Absolutely, I would recommend picking one up just to play the game, and test both versions.  That way you can decide if you are that crazy collector, who will pay anything, which version is the best to get for the price.  I would recommend the Japanese version if you must buy. You won’t be missing much, and saving thousands that could be used for other things, like purchasing a car, or a partial down payment on a house.

-Too expensive to justify a purchase 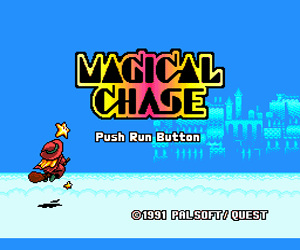