You back? What you just saw was Overwatch, a hot new IP coming out from Blizzard Entertainment next year.

Known for titles such as Starcraft, Diablo, and World of Warcraft, Blizzard is now branching out into the world of team-based multiplayer combat with Overwatch, and the marketing hype for this game is already reaching the frothing point.

From what we’ve seen so far, this fast-paced, class-based shooter is chock full of memorable characters, unique abilities and playable game types. With this new title, Blizzard seems set to make a move into the competitive FPS market, and they aren’t playing to lose.
What first struck me about the game was the people you can play as. From mystical archers to spider-like snipers, to angry gorillas and the most adorable time-traveling Cockney gal you’ve seen in gaming. The sheer diversity of the cast of characters you can play is unforgettable. Each member has special skills and abilities uniquely situated to a combat role, making teamwork and communication a must. It’s the integration of these different abilities, and the gameplay possibilities, that makes this game especially interesting. Instead of traditional battle strategies, maybe you’ll use your Widowmaker’s sniper to restrict the other team’s movement, pepper them with fire from your teleporting Tracer, lock down their escape routes with Torbjorn’s rocket launching turrets, and then mop them up with Winston’s primal rage. Alternatively, you can teleport your Tracer into their midst, drop a bomb, and then use her awesome-looking Rewind special to return to the place she was five seconds ago. Laughing while you watch your enemy blow up is optional.

Each character moves differently, and each character has different strengths and weaknesses. Some can fly, some can clamber up walls, some can teleport, and then some are stuck hoofing it on the ground. What is truly impressive is how each level is designed to accommodate all these different styles. In the gameplay demo I watched, I saw a sniper grapple up to an archway for that perfect shot; a flying support unit weave between rooftop structures to avoid projectiles; and a light, melee-based fighter scramble up a massive wall to escape certain death from a charging tank. The sheer variety of play styles on display, and how well they supplement and counter each other, looks very promising.

As far as game-types, so far it looks to be solely objective-based. Blizzard has said this is because the core of their game focuses on teamwork and collaboration; a lone wolf mentality won’t last long. Most maps shown so far are gorgeous, with the Egyptian ruins and Japanese temple being standouts.
From what we can tell, Overwatch is going to make waves in the competitive FPS market, and we can’t wait to get our hands on it. Keep it locked to Playlegit for more news as it comes out.

One More Overwatch clip just for you. 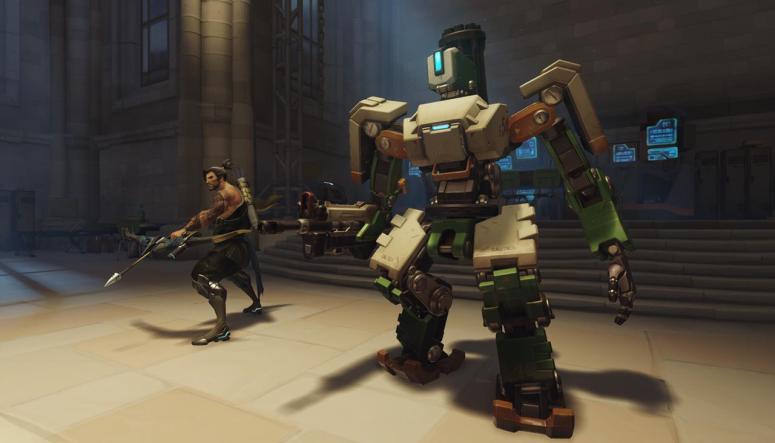 3 thoughts on “Keep Your Eyes On “Overwatch””