So if you missed my Mario Party 9 review in 2012 you may want to take a look.  A lot of the same issues apply to this game that plagued the last.  While I was hoping that 9 wasn’t the end of the Mario Party series I think I’ve changed my mind.  If Nintendo and Nd Cube want to keep shooting themselves in the foot, I wish they’d do it at the cost of a lesser known title, instead of one some of us grew up loving to the point of physical injury?  Remember that nice burn you got from the N64 joystick?   If not, you may never have played a real Mario Party game.  Let’s get into the details of this latest installment, Mario Party 10 for Wii U.

This title has three separate modes, which is a bit different from previous installments.  Amiibo mode is a bit of a throwback to how the older Mario Parties ran with players taking separate turns. Bowser Party turns a fifth player into boss himself, making moves of his own. Mario Party mode unfortunately is a lot like Mario Party 9.

Let’s start with Mario Party Mode.  One of the main complaints I had about the 9th installment was the fact that players no longer moved along the board individually but rather they all moved in a vehicle together, taking turns in rolling but then moving as a unit.  How they have failed to figure out that this is one of the most pointless strategies ever is beyond me. You can’t gain or lose more or less than the people in your vehicle because they are always with you!  How is this so hard for them to understand?  Have you ever played a board game where your friend rolls the dice, then you have to move the number they rolled?  No!  Why would they think it would ever work in Mario Party?  I wrote them a letter for Mario Party 9,  I think I’m going to write another.

During the game each player collects ministars which can move them into first through fourth place depending on how many they’ve collected.  So far I’ve played about 10 regular rounds, which by the way are all timed to about a half an hour, the days of a three-hour marathon are over too which sucks.  During those 10 rounds, 5 of them were won by a single event which usually includes someone landing on a Bowser space and me winning the mini game which in turn would award me half of everyone elses ministars.  Because the board has a defined beginning and end, this happens half, if not more than half the time, completely eliminating any fun to be had.  In older versions of this title the stages were round and players could pick how long or short they wanted to run, or for how many turns.  This worked better because it was less likely that one event turned the entire game around.

Thankfully in this 10th version of the title, the mini-games appear more often than they did in the last installment, meaning you may have a fighting chance to gain some leeway in this mode.  Still, it seems pretty arbitrary compared to its predecessors.  While we are on the topic of mini-games I found most of them to be amusing and fun although I was disappointed in the lack of Wii remote feature use, especially considering that the Wii remote is required for this title.  There are also less mini-games over all as compared to last time around and less boards to play on.  Let me repeat, less mini-games, and less boards.  Way to go.  Can just imagine the conversation that went on at Nd Cube studios, “Hey guys I know!  Let’s make more modes and less game!” and then “Wow he’s a genius!” they all replied without hesitation.  I mean just shoot me already!

Bowser Party I liked a lot better.  Even though you still move in the vehicle with four other characters be they computer or real life players, it makes more sense because you are all working as a team to defeat Bowser’s moves.  You all roll and gain accordingly but this time every move you make is against the fifth player.  When it’s the fifth player’s turn they move as Bowser and as usual he is able to cheat and lie his way through to gain on the vehicle and create dreadful minigames for the characters inside.  Not only does it make more sense but it is more challenging and makes the linear board more appealing.  This is definitely a plus side to the 10th installment.  Now for the downside of this mode, there are only 10 mini-games that you play over and over, and three boards.  Thanks Nd Cube.  Basically they made it so easy to get bored with that you have no choice but to go to another mode.  Let’s hope Amiibo mode is better because we surely aren’t going back to Mario Party mode.

Amiibo mode requires you to have the Amiibo whose board you want to play on.  There are 10 different boards for this mode but that would require you to have all 10 Amiibos.   Seeing as how this is a nearly impossible feat, especially if you want to find toad (who is also compatible with Captain Toad Treasure Tracker for Wii U) whose the hardest to get a hold of, you are going to have to spend $180.00-$200.00!  Are you kidding me?  That depends on if you find the Amiibos in store or you desperately buy them off Ebay.  Assuming you bought the Mario Party 10 that was bundled with a Mario Amiibo, you can enjoy at least one board.

During Amiibo mode you play like the older versions of Mario Party, thank the lucky Mario stars!  But wait. Don’t get too excited because each board goes in a boring square and is again almost entirely linear.  No alternate path, and no item shops means pretty much no fun, although I still like this mode better than the Mario Party mode.  Not only is it the worst dumbed-down version of an old Mario Party game, but everyone has to keep scanning their amiibo during every turn.  It is the most annoying redundant thing ever!

While I did have a slight bit of fun playing the game I am so highly disappointed in the sad attempt at making this version better that I can’t fathom giving it any kind of decent score.  To make things even worse to activate the entire game, you would have to spend upwards of $200.00 on it. This is mind-boggling.  Did the developers even use their brains?   I don’t even know how else to express my disappointment in this game than to just outright tell you, don’t buy this game unless it’s three years from now in the $10 bin and they are willing to throw in a free Amiibo.  Or unless some poor schmuck on Craigslist is willing to trade you this 10th one for the 9th one and you really need to have it for your little sisters birthday.  Or unless you happen to find it outside in the street run over by a car without the case but still intact.  It’s only getting the same score as 9 because some things were better and others were worse.  Here’s some advice Ng Cube, Remake 6 without putting your own two cents in.

+I did have some fun with Bowser Party

-All characters are bound together in tandem

-Repetitive and boring in the long run

-Less mini-games and boards than the last installment 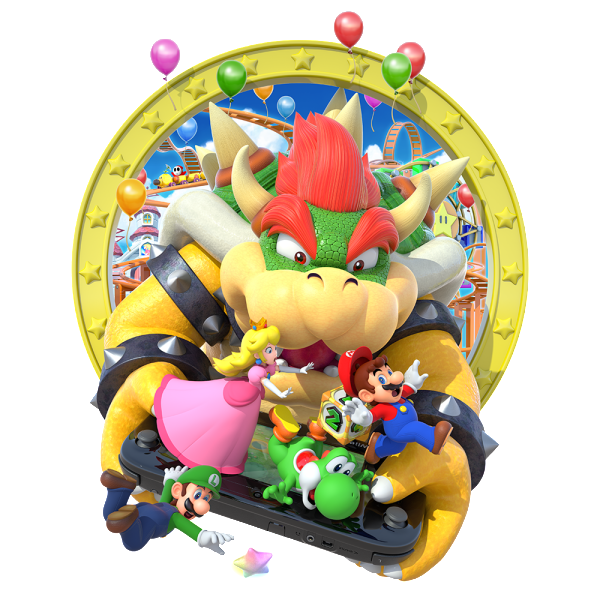