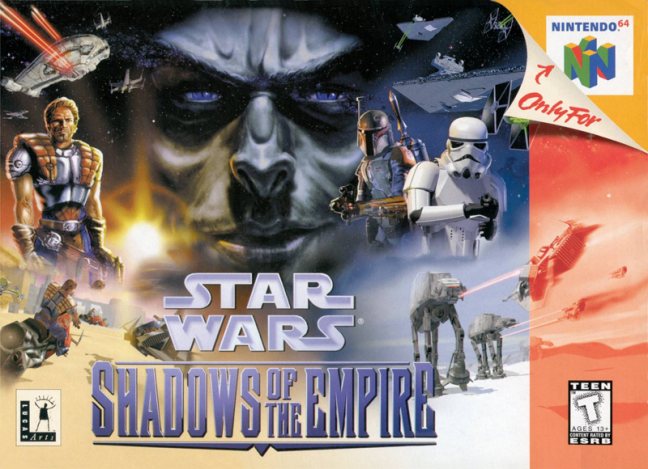 I have been a major fan of The Star Wars franchise for a long time, and the games as well. Here is my Top 10 list of Galactic Epicness:

Recently I’ve played this game myself for the first time. Though it’s old, I find it to be a lot of fun. I remember going to the arcade a lot as a child with my older brother. Mostly it was to play Turtles in Time or Street Fighter. I recently went to a retro arcade and bar, had the chance to play this. It still looks pretty sweet.

This game was a lot of fun, but the damn thing had horrible controls. Despite the odd configurations the game kept me entertained for hours. The story was fresh and licensed by Lucas with a slew of content. There were action figures, comic books and novels all about the same story, not to mention its own soundtrack.

I had all the kids in the neighborhood beat, no one could stop me! Seriously this game was my jam. We would constantly have competitions with all of my friends and I was King. Until years later that is when I found my equal and lost my first ever match, mad respect for that man. I beat him in the rematch however, and regained my force powers.

What can I say about these games? Well even though they suffered from the same repetitive game play, they sure were fun to just go through and wreck-face. The story wasn’t too bad either and the controls felt natural. Both had loads of just destruction and fun DLC.

Dark Forces, Dark Forces II Jedi Knight + Mysteries of the Sith Expansion, Jedi Knight II Jedi Outcast, Jedi Knight Jedi Academy. Some of the best stories told in the Expanded Universe. Not to mention, the later games were really fun to mod. The story of Kyle Katarn is so good they also have books about him. Despite that the last game in the series does not follow Kyle directly, as a whole, very solid story telling. The first few games may be challenging for newcomers as they are older games but I am sure they will enjoy the newer ones.

Let me be specific, just the original and the Jump to Lightspeed Expansion. That is how this game is being judged for this list. Star Wars Galaxies was a great MMO, and it wasn’t that bad even at the end when it was shut down. It was arguably at it’s best early on just after the first expansion with JTL.  Honestly, this was such an amazing Star Wars MMORPG. It is sad that over time it kept getting watered down to the point of just being another WoW clone.

I put so many hours into this game. I played it over, and over. I even got the cheats and unlocked other ships, including the Naboo Star Fighter. Quality game right here! I even Played the PC version and it is just as good! This game for a console “Flight Sim”, was truly fun to just pick up. Shooting Tie Fighters always felt satisfying.

The first time I played any of these games was Super Return of the Jedi. I loved it! I used to sit for hours with a buddy going back and forth playing it. Eventually I got my hands on the others but never beat Super Empire Strikes Back because Screw that game, it was so damn hard!

What can I say other than this was my first experience playing a Star Wars game and it has stuck with me ever since! The challenge of the first title was that you had to start all over each time you turned off the console. Its sequels had a code feature that let you get back to the level you where on.

This includes X-wing, Tie Fighter, and X-Wing Alliance I was introduced to the first game when I was about 12 or 13, my buddy had X-Wing Alliance for his PC. We would spend hours playing it back and forth. Never has a game made me want to go live in space than the X-Wing Series of games. Every mission felt like I was Ace in the cockpit, dog fighting with the best the Rebels had against the Empire. X-Wing comes full swing with you flying the Millennium Falcon into the Second Death Star just like at the end of Return of the Jedi.

What can I say about this game that hasn’t already been said. I’m not really big into this particular genre. Still, this was not only the best Star Wars game, but arguably one of the best RPGs ever made. Everything from the story to the music and game play this game had it all and you always wanted more! I can not say enough good things about this game other than I wish the developers had made the sequel instead of another company. Time to reinstall this one again.