Before Super Smash Brothers, Nintendo had another fighting game. This one didn’t do so well. Here is Urban Champion. We have a street brawler in-which players battled from various store fronts. You must knock the other person into a manhole. They each have their own. Fantastic. Well, that is the premise of the entire game. At least one could only assume. Considering there is no explanation as to why these two are fighting. We didn’t need some long reasoning behind it. But something.

Attack patterns are simple. Light Punch, Heavy Punch. Striking uses up stamina. You’ll have to time your offense. Blocking is an option. Defend against punches. Drain the other persons juice in the process. So I guess there is a tiny bit of strategy involved. Would you look at that. As you fight, the user will need to avoid the store clerk. He drops potted plants from the windows above. If it hits, the player is dazed, leaving that person open for an attack.

Battle from generic looking store fronts. Over and over. The difficulty ramps up a bit, but it’s never a true challenge. The only fight players will have is their own resistance to pain. I still cannot believe Nintendo put something out like this back in the day. Even worse, why they continue to re-release it. This is one game our children should never know existed. Looping generic music, no character variety at all. Your stuck with Generic Dude 1, or 2. The NES version should have been it, but this game would become one of the E-Reader titles. Players would slide the card through the reader attachment, which plugged into the Game Boy Advance. 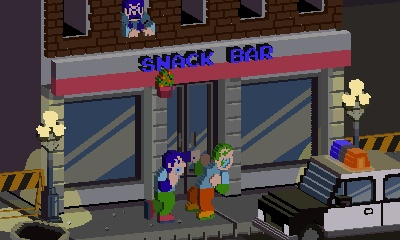 Then it came to the Wii with no noticeable changes, except being able to play with newer controllers. Nintendo releases 3D classics on their handheld bringing many beloved NES titles to the system. I guess someone at Nintendo just cant get enough of this game. The 3DS would receive a version of UC. At least It looks way better on here. If you have to play it, this is the definitive version. The Blocky graphics popping out at you, actually looks pretty solid.

If you happen to own the original unopened copy of the NES game, it may be time to sell it. Urban Champion is a reminder of where we have been. How far fighting games in particular have come. The issue is that even for the era, there were better options. This felt like a rushed tech demo than a full on title. Karate Champion, or Karateka were way better offerings. Theres not much you can say about a game that offers so little. While we have seen little additions along the way, this is still a severely bland game. Urban Champion was and always will be a snooze-fest.

+The 3DS Version has a nice look 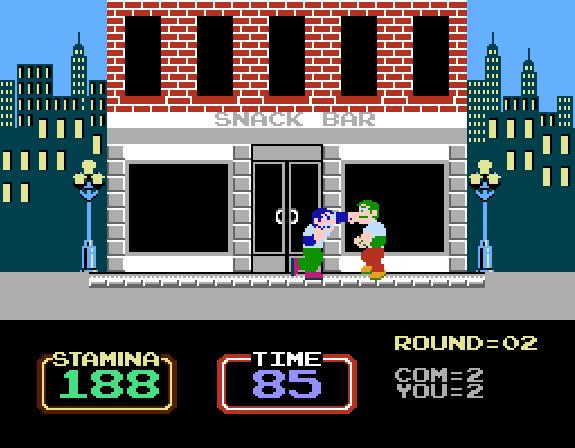