I’ll admit I was a little worried about this game, I remember the first and only South Park game I had played really sucked in my opinion. But after the first 10 minutes those worries were drowned out by laughter.

Shortly after you, the new kid, arrive in the sleepy town of South Park, your parents push you to go outside and play with the neighborhood children. Unfortunately the first person you meet is Butters, and you have to help him since he’s losing a battle with a kid in an elf costume. Being thankful and recognizing that you are the new kid, he takes you to the Kingdom of Kupa Keep (KKK) to meet the Grand Wizard Cartman.

The whole game felt like I was interacting with a South Park episode or movie in an RPG like way. There is no other way I can put that, it feels, looks, acts, and sounds like an episode of SP. Unique graphics indeed. The difference is that you’re playing a game. Faithful SP fans will recognize a lot of the jokes and characters that they’ve come to love over the years, and people who aren’t as knowledgeable will come to enjoy them throughout the game.

Your character is very customizable, in the beginning, everything is available to you, all the dyes, the beards, hairstyles, facial features, etc. After you choose you character, if you want to change anything, you will have to find it as loot in the world, or buy it from the shops. Tom’s Rhinoplasty can help you if you need to change your facial features. Not only can you customize yourself, you can also use add-ons to give your weapons and armor an extra edge in battle. Using different patches and strap-ons, you can add anything from elemental or hazard damage to extra shielding or more money gained from battles. 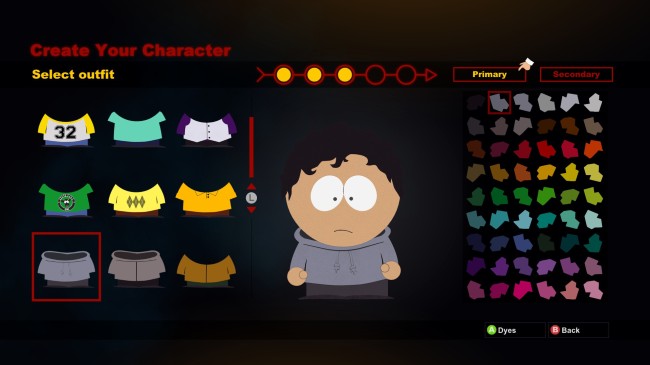 The Story is offensive, comedic, and childish, but it is so much fun. The children of SP are separated into two factions, one faction plays as humans, and the other as elves. The primary goal of the game is to protect the Stick of Truth from the other group, because whoever controls the stick, controls the universe. Since you are recruited by the Grand Wizard, you play alongside the humans, and after the stick is lost to the elves during a raid at the beginning, it’s up to you to get the stick back. Of course, if it was just that, then this wouldn’t really be a SP game. 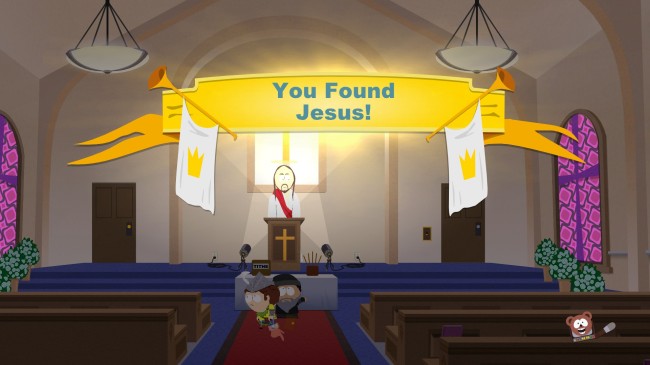 The plot changes, and everything just get outright ridiculous after some time. It starts out innocently enough that you really don’t see somethings coming. Of course this is SP we’re talking about. However somethings did have me wondering how it got past the ESRB (which they poke fun at during parts of the game). So I warn you, if you are easily offended and you want to play this game, you’re gonna have a bad time. There are several reasons this game was partly censored in Australia and Europe. Just a warning.

The battles are very entertaining, remember this is a bunch of kids playing a fantasy game, so it will look just like that. The first fight you’ll have is a tutorial (like any other RPG) where Cartman teaches you how to attack and use your abilities to help you in combat. There are four classes to choose from, Fighter, Mage, Thief, and Jew. I went with the mage since I like destruction in my RPG’s, so I will speak based on that. The first time I used an ability (Dragons Breath) I was expecting something maybe out of their imagination, which some things are, but in this case I lit a firecracker in the kids face and set him on fire. Much better in my opinion. 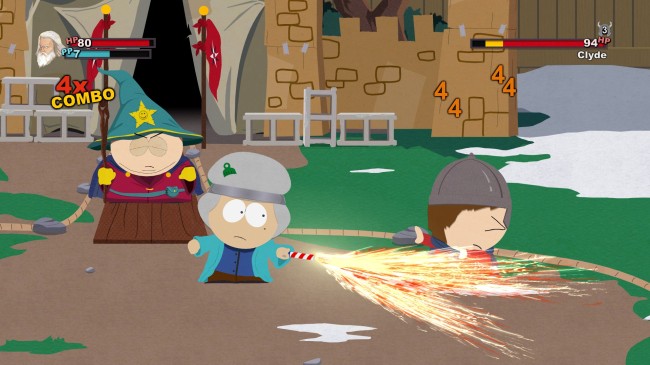 The battle gameplay felt like the Mario RPG’s, this is good, because in some other RPG’s, I’ll lose interest and just attack without caring what I use. In this game you attack, and can also hit button prompts to give your attack extra power. These same button prompts are also used when defending yourself against the other players attacks. You also have two characters to control, yourself, and one of the main SP kids, each one comes with their own abilities and perks which you can’t change, but they all have different advantages and disadvantages. There are also summons you can use in the game, certain characters will come to your aid (except against bosses) if you help them out in during the game.

The level system was a bit weird, you gain xp from fighting, but it’s not enough to grind which is something I like to do to stay almighty and powerful. Most of your leveling up comes from the missions themselves, and if you aren’t paying attention you may not even notice it. Each level will let you power up one of your many abilities, and the perks actually work by making Facebook friends, after a certain number of friends you get a point to use towards a perk. It’s something to look out for, as you will want to talk to the residents of the town if you want to fill your friends list. Your rank (you start out as Douchebag no matter what you say your name is) also goes up throughout the game after the important quest.

From the world itself, battles are started by running into, and attacking your opponent. They can also run into you and attack you, this gives them the first attack if you let it happen. There are ways to start out with an advantage, you can shoot them with an arrow before running into them, or you can fart in their direction once you master that ability, this will gross them out before battling, and they will be susceptible to more damage. Later on, you’ll be able to end a battle before it even starts by using the worlds hazards. This will “kill” the enemies without having to actually fight them, and you still gain the same experience.

It’s the little things that really made the game for me, I’ve been a fan of SP for a long time, and even though I don’t keep up with every episode, and I only played that one game on N64 (which again, really sucked), I really do like SP. And this game was a proper tribute to the show. The jokes that tie into the show, the characters that make the show, and the ridiculous story all work well together. At the beginning when I was starting out, I put my controller down without pausing and picked up my phone to text someone, after a few seconds Butters says “If you’re texting your friends, don’t forget to tell them how awesome the game is”. At first it was a little weird, but when I realized he couldn’t see me it was just a funny way of breaking the 4th wall.

The way the story progresses kept me guessing the entire time, I usually try to guess what’s going to happen before it happens, and every time it just went in a direction that wasn’t even in my closest guesses. Trey and Matt really outdid themselves, and the game is so much more fun because of this.

South Park: The Stick of Truth Gets 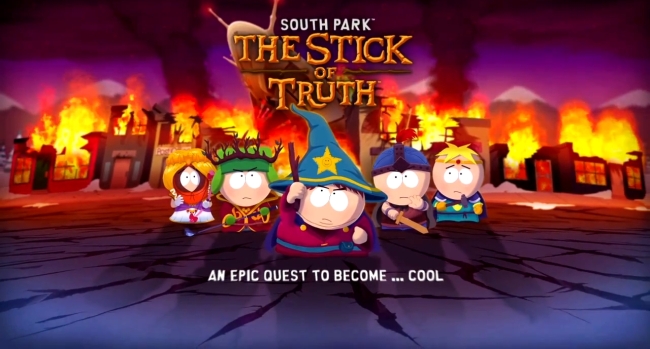 3 thoughts on “South Park: The Stick of Truth Review”