I can understand why you would take it down, honestly in your shoes I would be thinking the same thing. I’m not a big fan of negative attention either. But I think that if you take it down, you’re letting the haters of the internet win. All the haters that said your game was a copy, or talked about it being stupid, they would win. And honestly they win nothing, but you lose a lot. Right now I’m looking through twitter, and after your tweet (about 22 hours ago as of this sentence) I’m seeing a lot of people begging you to keep the game up. These are the people who should matter to you, they are the ones enjoying your game. The people who don’t like it are the ones that aren’t even playing it. And as a disclaimer I’ll add that I played your game, and I didn’t like it, but that’s just me. It just wasn’t appealing to my taste. I can however, see why other people like it, I’ve seen people play it competitively against their friends, and I’m sure others play it to kill snippets of time throughout their day like most people who play games on their smartphone.

If anything, people were most likely jealous of your success in the App/Play store. Few games get to the level Flappy Bird got to, and that seems to be what a lot of people are hating on. Your game, simple as it is, maybe beat theirs, or maybe beat someone else’s favorite game. And for some reason that seems to bother people enough to be vocal in their negativity. You shouldn’t let that bother you however, people will be negative, but there will be positives too. One big positive is the success of your game. That alone should be enough to continue. You will never be able to please everyone, but that shouldn’t stop you. It will be hard to ignore, and you’ll still probably get criticized by people who have nothing better to do with their time but be negative. But that’s just how people on the internet are, and with how some things on the internet work, this will probably all blow over in a couple of weeks. 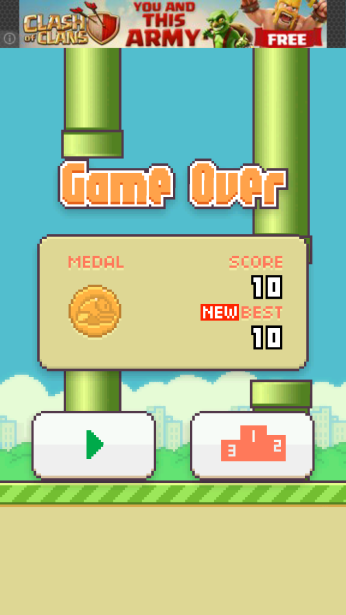