Deadpool for XBOX 360 and PS3 is a fairly average hack and shoot 3rd person action-adventure with some light platforming that has a great story and great characterization of it’s lead. As the resident Play Legit Marvel fanatic, I’m happy to say that Deadpool’s game debut perfectly captures his personality, humor, and the zaniness and unpredictability that his fans love in the comics. But as a gamer, I have to say that the gameplay part of The Merc with a Mouth’s freshman game effort isn’t quite as satisfying.

Deadpool The Game is everything I expected it to be, but that’s both a good and bad thing. So while I loved the way High Moon studios and Activision captured the character, I also thought from the games numerous delays and lowered price that it would be a fairly average, if possibly low-budget action game, and I wasn’t far off from the truth. If you’ve played any 3rd person action shooter/brawler/adventure game in the past 10 years+, Deadpool’s gameplay is absolutely nothing new, and offers the absolute most standard package you could imagine in terms of what we’ve come to expect from this genre. If this game had come out about 10 years ago as it is, it would’ve potentially been mind-blowing, or at the very least not considered as average.

There is a light and heavy melee attack as well as 3rd person left analog stick shooting, again, very standard, as well as “Deadpool Points” you earn throughout the game to unlock upgrades, the upgrades functioning in this game very similar to recent Spider-Man and Wolverine games, with more upgrades available in a branch after you purchase one skill, but there is no leveling. None of this is bad per-say, it’s just that it’s more or less exactly what I guessed it would be, and there’s more than 2 dozen games with systems exactly like this, meaning that the development team didn’t exactly scratch their heads or strain their brains on coming up with some new or unique to the game/character, and used something very tried and true. It’s like eating a peanut butter and jelly sandwich, there’s nothing new about it, but again, it’s not necessarily bad either. The one reason why this is a larger complaint for me in regards to Deadpool, especially in this game, is that they make his character so defined, so zany, so pronounced, and so unique that you kind of get let down by the very cookie-cutter game and system, which seems really boring in contrast to what Deadpool says, how he acts, and what happens in the cutscenes.

In fact, the cutscenes are the best part of the game, with Deapdool veteran and Uncharted talent Nolan North voicing the red-clad assassin, with fellow Marvel game and legendary voice actor Steven Blum coming back yet again as Wolverine. The other cast perfectly understands and voices their parts as well, and the cutscenes have humour and randomness that is straight out of the comics. Comic book fans will absolutely love all the story and humor content. Honestly, the game itself could’ve used more of the randomness and silliness of the cutscenes in the game itself. I sometimes expected Deadpool to just randomly break into song, or do something to throw me, as a gamer off, such as refuse to perform a button command because he doesn’t feel like it, throw the health meter off the screen, or switch the controls around, but most of the in-game humor is relegated to various quips and quotes while playing, which have been a staple in games since PS1. If there was any game to try to break grounds of humor within the 3rd person action genre, this should’ve been it.

I didn’t expect that in a Deapdool game I would hear repeated jokes, I can forgive this to an extent in other games, but it seems like for during the battles, North didn’t actually record that many one-liners. For those that aren’t familiar, one-liners and jokes made during inappropriate situations is very much Deadpool’s thing, even more so than Spider-Man, and when I’ve heard more quips and quotes in a Spidey game (thinking of Shattered Dimensions, with it’s level-specific jokes), then there certainly needs to be more. I’m saying that in my ideal version, there would’ve been hours and hours of one-liners, and one playthrough wouldn’t even have them all.

The biggest issues with the game are basic things that a little more programming or effort would’ve fixed. For example, Deadpool can hang off of some ledges in the games, but not off others, even though it’s within your jump range and you can do it with a ledge that the game allows you to grab on. The only means of defense is Deadpool’s teleporter, which is one of the worst programmed parts of the game. In the comics, Deadpools teleporter is cheap and low-quality, so it needs to recharge and isn’t always reliable. That makes for funny comics, but in a game, it gets tiresome, because the teleporter, again, your only means of defense (there are no evasive movements, crouching, or cover), will occasionally over heat, and there is no meter on the HUD that shows how many more uses you have, which leads to some frustrating deaths during some battles. Deadpool really should’ve had more movement options, he’s very slick, agile, and acrobatic, and some sliding, dive rolls, and cartwheels would not have been too much to ask for. The combat has a something of a stiff, choppy style to it that I thought leveling up would change, but it’s that way throughout the game, there’s no excuse for that. It’s not the worst combat I’ve ever played, but I expected something more along the lines of Ninja Gaiden 2; Deadpool instead has a very clear pause between a lot of his movements, and I often found myself wanting him to move faster. Then again, I only used the standard weapons to complete the game. There are other weapons, but you never truly need them. Arkham City finds way to force you to use new gadgets, weapons, and techniques to get past new enemies, but in Deadpool new equipment is strictly optional, and the enemies never really require a unique strategy to beat them, and trust me, you will be fighting the same enemies from start to finish (something more forgivable in 16-bit days).

A friend of mine who is a huge Deadpool fan said that if he had designed the game, he would’ve included many more environmental based ways for Deadpool to fight, being able to use unexpected items and strategies as weapons, capturing his zany, unpredictable, comedic, yet effective fighting style. I myself can recall Deadpool being a skilled user of traps, but the only traps and master plans you concoct in the game, are during cinematics. Not putting them in gameplay was a missed opportunity. In summary, Deadpool is a fun, short, very rental worthy game, or worth a cheap, reduced price buy, but probably only if you’re a major comic book fan. If you’re not that familiar with Deadpool, or not that big of a fan, then you’re missing nothing by not picking up this game. This game could’ve been a great introduction to Deadpool for many gamers, giving him a great game to give him even more exposure, but if you want to get acquainted with Deadpool’s personality or style, but don’t feel like committing to a mediocre game, then you’re probably better off watching the cutscenes from this on Youtube and then reading some of his comics. In all, I think the writing staff of this game should-be made into an animated movie, as they put most of their effort into coming up with a great character, style, story, and atmosphere, but leaving the gameplay very average. In my opinion, this game proves what I said in an earlier article, that even if you have great characters, story, script, and dialogue, if you’re making a game, you still have to focus on what your game offers it’s players on an interactive level. The creators of Deadpool The Game thought that the hilarious dialogue, irreverent gags, and well-defined style would overshadow or distract from some of their sloppiness, but they thought wrong and that’s why

Deadpool (generously, probably because I love Marvel and this character) Gets 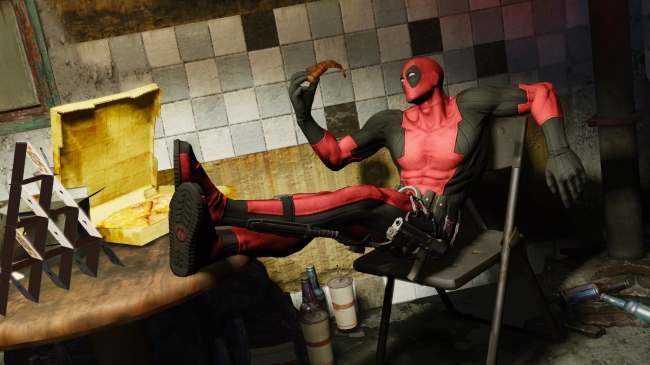 One thought on “Deadpool Review”