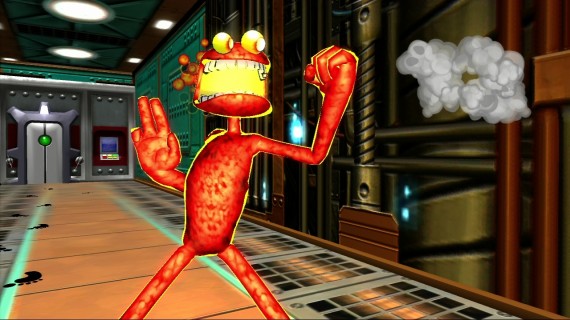 Warning! This article is for audiences 17 and up.

With the recent events of Comedy Week and our own special coming in late August, we thought it was a good time to list the games that made us hurt (from laughter of course).  Deadpool: The Game is out now, see where it landed on our list. Controllers were dropped, milk/soda was spilled, and great times were had all around. Here is the funniest games available from this current generation that you must play, or play again. This list has titles that were either intentionally funny, or so bad its hilarious in a Steven Segal movie kind of way.

Whether it was the constant references to the Airfield stage, of the unstoppable wave of empty threats, this version of splinter cell had us smiling from the shadows. While some people thought the guards went overboard with the taunting, we feel it made the game more satisfying when getting your hands on these goons. It’s as if they hired one person to voice all the enemies in the game. Play the video above, and enjoy the cartoonish insults directed towards Sam Fisher.

Ending credits, and various cut-scenes made this game a riot. Splosion’ man was constantly making silly sounds, and interacting with his world in such a unique way, it had to make our list. It was a smart move by Microsoft to acquire Twisted Pixel, they are truly the kings of gaming comedy. We’ve never had more fun beating a game than in this title, and the video above explains why. Play Ms. Splosion’ Man as well, where the hilarity continues.

This is one of the best overall games of this generation, yet it has other elements which add to the experience. The dialogue in Arkham Asylum/City, both have over the top guards spewing nonsense. Batman AC stands out because the trash talk actually is custom to the character your playing as. It’s fun sometimes creeping on a group of guards and listening in on conversations. While most are for the Bat and his crew, sometimes the guards talk trash about their own employers.

While our hero is mainly an emotionless being, the supporting cast in absolution really stands out. From crooks yelling splinter cell conviction-style taunts, to the crazy King of Chinatown, gamers were entertained. The Evil Cowboy Blake Dexter was a champion in his own right. In the clip featured, the character next to 47 isn’t even a baddie, but he’s just as absurd. This game is known for its brutality and fantastic graphics, but there’s more here. Watch and enjoy.

The game based on Dick Marcinko’s real life covert operations, wasn’t well received for its gameplay. Stiff controls and a poor multiplayer that’s a ghost town at this point (believe me I checked, no one’s on it). The saving grace were the insults spewed by your character which oddly enough, is voiced by Mickey Rourke. We felt that the designers were miserable during the developement, so as a way to make things entertaining they made that music mix above. It features most of the profanity throughout the game and sinks it with some funky music. The game is at bargain bin prices, and if you can tolerate the dull gameplay, the barrage of cursing is truly epic.

It’s as if this game was made in the 80’s. The presentation is uber throwback. Michael Biehn brings his much need Kyle Reese swag to the proceedings. Plenty of corny one liners, and a sensational soundtrack emersed players into this throwback experience. A movie needs to be adapted from this magicial game. Considering Ubisoft has its own movie studio now, the idea isn’t farfetched at all.

Videos are constanlty being made of gamers causing mayhem in this open world. New ways to hurt themselves and NPCs in liberty city. Check out the hilarious montages on youtube right now. The game already has its famous radio station advertisements, but the cast of characters offer loads of entertainment as well. Surviving Brucie’s roid rage sessions, and the major task of figuring out what Little Jacob is saying, was all part of the amusement.

The merc with a mouth is voiced by Nolan North in this action adventure game on 360/Ps3. This is a title filled with humor, headlined by Deadpool’s amazing hallucinations during gameplay and cutscenes. While the gameplay has been deemed thus far as being mediocre, the writing of the game is receiving a lot of praise. If anything, rent the game to enjoy the jokes and insanity that is Wade Wilson’s mind.

It’s funny for multiple reasons. The terrible performances to the poorly written dialogue, Deadly Premonition is gaming’s version of Tommy Wiseau’s The Room. The music rarely fits with the situation, and can sometimes be excruciating to listen too. It’s funny laughing at characters trapping themselves into long rants about subjects that have little to do at all with the main story. How about those sandwiches?

From the countless pop culture references to the endless funny dialogue, comic jumper is our number one comedy choice. Captain Smiley’s supporting cast is funny alone, including a talking star on his chest, who constantly insults our hero. A particular boss has his own amazing theme music, while another constantly reminds us of how many kids he has to feed. If this wasn’t enough, the captain has a special ringtone for his phone. While the gameplay mechanics could be a little more solid in this one, the well written comedy outshines it.

2 thoughts on “The Top 10 Funniest Games of this Generation”