Real Talk By: The Ax

Beer. Video games. I find these to be a match made in heaven. I mean, who doesn’t want to get a little tipsy and play Conker’s Bad Fur Day or Saint’s Row the Third? Some games are meant to be enjoyed instead of relished, and I find some of these games are best played with a dash of inebriation. In this segment, I come to terms with my terrible habit of buying too many video games, except now I force myself through them with a little social lubricant. Reader beware: most of the games I will review in this fashion are either old, stupid, or both. Prepare yourself for the absurdity that is Player 1: Drink!

It’s not really that difficult to get me excited for a game; a few key things to include are guns, sharks, dinosaurs, Sylvester Stallone, blood, and metal music. If a game exists that has 2 of the aforementioned attributes, you bet your sweet ass I want to play it. So naturally I was excited to play Turok. There are so many fond memories associated with that franchise… I remember turning friends into monkeys and watching a little spiky ball bore itself into other players’ brains while I sat and giggled profusely at the sheer amount of blood. Also, judge me how you will, but Turok (2007) was my very first next-gen experience. I hadn’t played this game in 4 years, so I thought it might be time to revisit it. Nope.

At first I thought it would be hard to screw up a game about dinosaurs with voice actors like Ron Perlman (Hellboy) and Timothy Olyphant (Justified). These guys get paid millions of dollars a year to act in big movies and tv shows, surely they can handle 1 game, right? Well they might have done a better job if the writing weren’t laughably bad. Ron Perlman’s character, Slade, is not only irritating, but also vapid. For the majority of the game, all he does is complain about how much he hates Turok. Not only are the lines bad, but the delivery is out of sync with what is going on in the game. Lines are said with very little enthusiasm while being chased by raptors, which I found to be extremely entertaining.

And then comes the gameplay, which requires a decent amount of either patience or beer to cope with. I figure I’m playing a video game; if I wanted to be patient I would sit in front of my computer waiting for a Half Life 3 announcement. So the drinks begin. The first thing that bugs me about the controls is how they are not customizable to any extent, with the exception of look sensitivity and inversion. This means that while playing on a PS3, I am forced to used L2 and R2 as primary trigger buttons. This is the part where I pause my game and go out and buy a 12 pack because I am aware of how long a night this is going to be. Secondly, there is no run button/command. I’m sorry, I thought the gameplay mechanics of doom were outdated ten years ago.

Once you have a few beers in your system, the game starts to flow a little better and the laundry list of flaws don’t seem so bad anymore. Like how enemy AI has no regard for their own lives and rush toward you in broad daylight, or how their shooting is ridiculously accurate and deadly. This makes the game’s awful autosave system so frustrating I almost started breaking things. In addition to the stupid AI of the enemies, your allies aren’t so bright either. Many a time would I turn to run away from a big guy with a chaingun and one of my allies is standing behind me with his thumb in his ass. They don’t even wave to say hi to me before I die, let alone get out of my way. So to cope, I drank more!

The game doesn’t autosave very often during the difficult parts, yet it seems like the game is always saving when things are easy. I had gotten to the point of not caring during one of the more difficult sections and adopted a tactic I never intended on keeping: Knifing everything. Frankly I did it to be funny, because no one can kill a dinosaur with only a Rambo knife. C’mon, we have all seen Jurassic Park. No lawyer is safe and you can’t play fetch with them. Apparently the game design of Turok is broken to the point where ten bullets won’t kill a raptor, but one nicely timed tap of the ol’ R2 button will trigger (pun intended) a mini scene of my character either slitting the dinosaur’s throat or stabbing through the top of its skull. Not so clever now, are you? (I actually yell these bad one-liners at the bad guys when I kill them… it’s more fun that way!)

The “boss” battles were actually a highlight of the game because they were mainly monsters and not soldiers. Have I mentioned how much I hated the soldiers? I was disappointed in the T-Rex battles though because they seemed particularly easy. I killed them so quickly that it seemed like I taunted them to death by showing them all the cool things I could do with my normal sized arms. The other main battles were mainly horde mode sections in-game, but with my trusty knife, I was unstoppable to anything without projectiles.

In summary, the majority of my time playing Turok was spent desperately trying not to chuck my controller at the screen because of how stupid the AI is and how accurate the enemy soldiers are. Here are my recommendations for what could make this game better, without changing any of the gameplay mechanics:

2.       Putting little propeller hats and big lollipops on my allies

8.       On second thought, make everything Zombies

I would give this game 6 out of 12 beers. Now since this is the first article of the segment, I will give a very brief explanation of my ratings. My rating system is very different from the typical “stars” rating system. In fact, it’s pretty much the opposite. The number of beers I give a game is indicative of how many beers I feel one should have each sitting while playing this game to make it fun. The idea is to find that sweet spot where I get silly enough to enjoy the game a lot, but not so silly that I won’t remember playing it. Some games, like E.T. for Atari 2600 I might give a score closer to 12 beers because I would rather not remember playing it. Turok is a game best played drunk, but not sloppy, with friends nearby so you can laugh at it as a group. Beer is the best way to turn a single-player game into a multi-person experience! 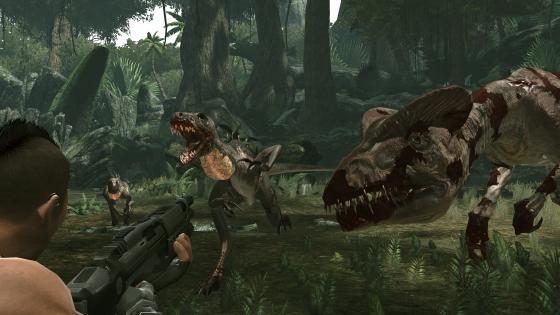