Having a memorable character in a game is something that’s hard to come by.  You have to come up with its signature look, its appeal, what behavior it will exhibit, and most importantly it’s personality.  Even the most minuet of characters sometimes takes months of preparation to get right and creating something that can be loved and last in the memories of thousands of fans is something even more spectacular.  Some personalities stay in our mind because they are unmatched heroes or classic characters from the beginning of video game history.  Then there are the characters that are just too freaky to forget, too scary, too wild, too strange and way too weird to even fully understand.  Below is a list of PlayLegit’s top freakiest characters. 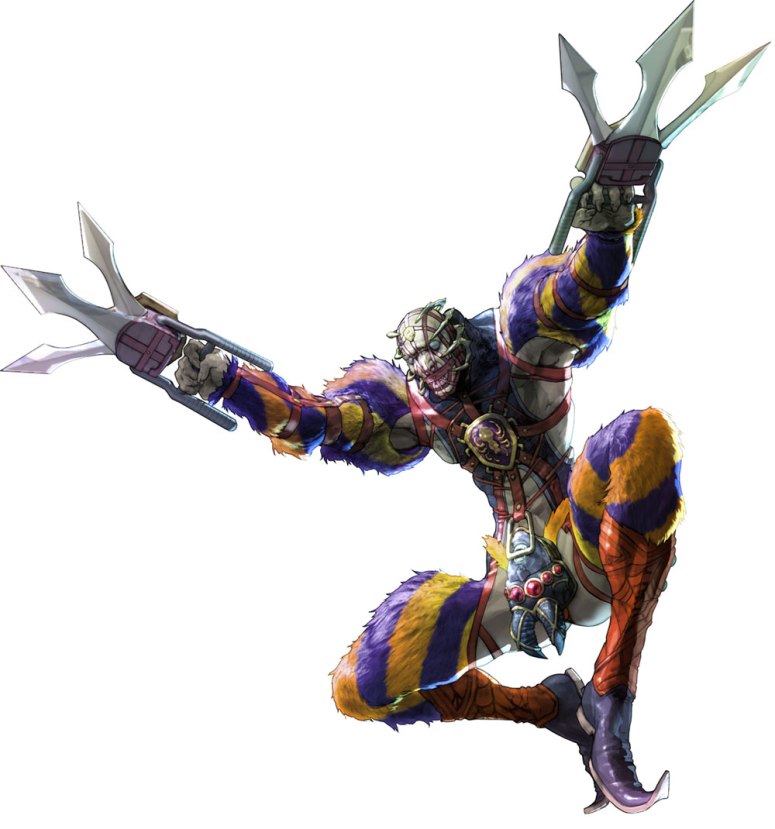 Voldo’s story is one that is rarely remembered due to his strangeness.  Voldo was the right hand man of a weapons merchant known as the Merchant of Death.  Dealing in specialized arms and rare items he became the center of a war effort aiming to take the entirety of his goods.  fearing that his precious weapons would be stolen the merchant sent sailors with his supply to a far away island and then had Voldo kill them so that the location of the items would be known to no man.  He was then sealed underground to protect the arsenal, becoming blind and insane in the process. During game Voldo is a sight to behold, he strangely sways his hips, gyrating them in unpleasing motion toward his competitor.  He may crawl backward toward his enemy exorcist style and do a forward roll kicking his opponent with his signature scorpion move.  Many people also don’t realize that many of Voldo’s moves are motion capture sequences and not all animation.  There is an actual person backed up by a green screen freakishly contorting himself to create a character that we’ve all come to recognize.

Tingle is a merry looking 35-year-old that floats around by a red balloon collecting rupees and other treasure and in return will sell and decipher maps for the famous Link.  He wears a clock that is always stuck at 4:00 and is known by his father to be a fool. In his own game appearances it is explained that Tingle actually needs the rupees to live.  Tingle has not generally been received well by critics many of them stating that he is too weird, ruins the Zelda series, or puts a bad taste in their mouth.  PlayLegit thinks any publicity is good publicity and Tingle should be taken for the gem he is.  He’s goofy, fun, annoying, and a character we can never forget.  Eiji Aonuma stated in an EGM interview that he “found out some American people didn’t like him very much” and decided not to put Tingle into the Twilight Princess installment of the Zelda series.  Here’s saying that we would love to have him back Eiji, he has captured our attention from the beginning.

Have you ever actually taken a good look at Q’Bert? What is that thing? He’s like a fuzzy orange tennis ball with limbs, and as if that isn’t weird enough they added a trunk to his face.  It seems like if all they needed him to do was jump onto a set of pyramid blocks to change the colors of them, they’d have just focused more on making a character with big feet.  Instead we have this focus on the nose, for what? A little known fact is that Warren Davis, the creator of Q’Bert’s character originally gave him the nose to shoot projectiles.  Which reminds me of someone else with a nose like that, that shoots projectiles, Birdo! Hmmm…Nintendo, where do you get your ideas? The projectile portion of the game was removed to simplify game play and so we ended up with Q’Bert, extremely odd and out-of-place but none the less, fun.

Emir is a Japanese-American…well…according to the game he is.  I don’t mean to be bias but I’m saying he looks more African-American if anything.  Of course I suppose he could be Japanese-African-American, you know…we really should come up with a better way to describe people, this is really getting out of hand. Anyway, it doesn’t matter what he is because he has a third eye which puts him in the category of Three-Eyed-American and not much else about his physical description really matters after that.  His mother began to have a sexual relationship with him when he was in school, to which he responded by killing her.  We may have all felt sorry for little Emir and welcomed him into society if he hadn’t become a rampaging unbalanced freak of nature killing everything in his path. A three eyed, (they are demon eyes by the way.) Japanese-American psychopathic rape victim that looks like a black guy who was born on “Victory Over Japan” day. I just don’t think it could get any stranger.

“Whatcha sellin?” any true Resident Evil fan has no trouble placing those words to the character the Merchant in the Resident Evil Series.  He has a short-lived history selling black market arms and items in highly obscure places in-game.  He was a huge hit in Resident Evil 4 and was designed for the 5th installment in the series but was removed before the final production.  Sadly because of this almost nothing is known about one of the most well-loved and secretive characters in gaming history.  The merchant can be easily killed in most instances with a single hit unless he is in a shooting gallery.  I know many of the fans of the series would love to see the return of the Merchant “Ahhhh…we’d buy it at a high price.”

2 thoughts on “The 5 Strangest Video Game Characters Ever”