Studio Ghibli has been one of my favorite animation studios of all time. In my opinion they could be considered the Disney of Japan, and their main animator Hayao Miyazaki could be considered a living legend. Films like Nausicaa Valley of the Wind, My Neighbor Totoro, Lupin the 3rd, Porko Roso, and Grave Of Fireflies will stay with me my whole life. So when I was at the game store about a month ago a little game called Ni No Kuni caught my eye. I haven’t invested time in a JRPG in years. In my opinion the genre is getting stale. The corny voice acting, the same over the top comedy , and stories about some young guy on an adventure to save the world just got played out long ago. I proceeded to read the back of the case anyway knowing the game would be a JRPG, and confirmed the game was done by Studio Ghibli, and was made by Level-5 who made the amazing Rogue Galaxy, Professor Layton, and some of the later Dragon Quest games. That right there sealed the deal. Needless to say I purchased the game and here we are now, ready to review the Playstation 3 exclusive Ni No Kuni: The Wrath of the White Witch.

I have said it before and I will say it again, I hate giving away the stories in my reviews. So I will keep this short and sweet. Ni No Kuni revolves around the story of a young boy named Oliver whose mother dies. After her death Oliver meets a fairy named Drippy who helps him locate a magic wand, and teaches him to use his new-found magic power to enter the world of Ni No Kuni in hopes that Oliver can somehow save his mother. So the game takes place in two different worlds, a fantasy world, and Oliver’s modern world. You will travel between the two worlds in hopes of finding clues to help save your mother while meeting new companions called familiars along the way which aid you in battle. The story is a slight twist on the cliché young boy goes on an adventure to save the world. The story element of the game isn’t really anything new and as far as I’m concerned is the weakest point in the game. The story isn’t bad so don’t get me wrong, it’s just not anything new. It is better than the stories in most JRPG’s I have played in the past.

The graphics in Ni No Kuni are a different story all together. The only way I can put it is that Ni No Kuni looks gorgeous! If you have watched any of the Studio Ghibli movies it looks exactly like the art in the movies. If someone came in the room they might just think you are watching a cartoon. It looks that good! The whole game looks hand drawn, and I can’t possibly imagine how it could look better. They really went all out in the presentation of Ni No Kuni and it shows!

If you can appreciate music done by an orchestra then Ni No Kuni will have you covered in the music department. The entire soundtrack is done entirely by the Tokyo Philharmonic Orchestra. So basically it is performed by a group of musicians who have devoted their life to music. The musical scores work very well with the game to help set the mood and atmosphere of the game. In the sound department Ni No Kuni gets it done pretty well also. The voice acting is above par when compared to other JRPG’s. Yes, some of the voices are a little annoying, but they are all done well, which is rare in a JRPG.

As far as game play goes Ni No Kuni delivers pretty well. The game has an old school over the top world map that looks pretty darn good for an overhead map. There are no random encounters you can see all the monsters Chrono Trigger style. In the cities and dungeon areas you go into a 3rd person view which is where the game looks amazing. There is a map which is done very well. There is also a quest and bounty hunting system and they are always displayed on the map which is a great help. My main complaint in most games is you get stuck wandering around for hours and I have never encountered that with Ni No Kuni. As far as combat goes it is pretty interesting. Basically you have familiars you find through the game with different abilities. Some may be melee, some magic, and some evasion. The way it is set up you can bring a few of these guys to combat, but you can only use one at a time and must switch between them. Different familiars are better against different types of enemies and it takes a little time to learn which familiar to use in which situation. In combat you free roam in an area. You can perform blocks, and can even perform counters by attacking right before the enemy hits you which can be very tricky to do. The combat, and especially the boss fights are a lot of fun. In the first few hours of the game the combat can be a bit repetitive, but it gets better the further in the game. I was surprised that Ni No Kuni was a little difficult. I normally go through games with ease but have lost many battles in Ni No Kuni. The defending and countering can be difficult to pick up at first and makes the game harder. Also it is worth mentioning that the game feels kind of grindy. You will need to spend time on all the side quests and even a little extra grinding to keep up with the difficulty. There is so much about the game it is hard to cover it all in one review. Just know that everything is done exceptionally well. 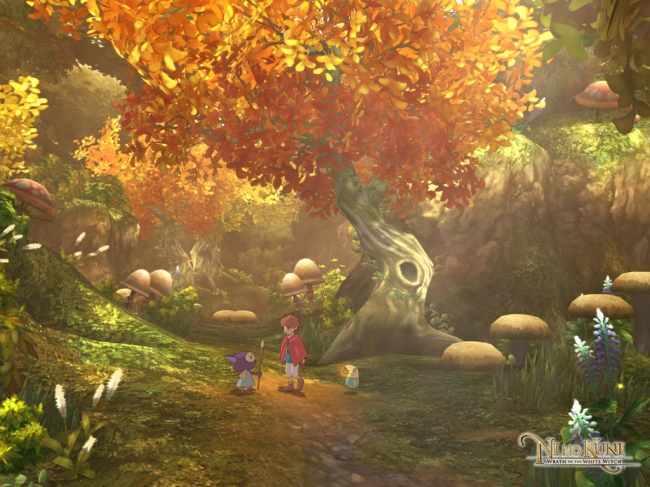 In conclusion Ni No Kuni is just a very solid game in every aspect. The game looks amazing and the music is among the best I have ever heard. The game controls very well, and the story is decent. There are only 2 gripes I have with the game. The first being that if they spent all this effort on the game they should have come up with better names for the enemies. The enemy names had no thought in them whatsoever, and are a huge disappointment. Second, Even though the story is nothing new and is done well. I just really hate how JRPG’s are always about some 13 year old saving the world. Why can’t we get a game like this but with a serious Final Fantasy Tactics type story? I just don’t understand why 95% of JRPG games cater to 15 year old children? You would think game companies would realize that a large, and maybe even the largest portion of gamers nowadays are adults. It would not have been too far off to make a more serious story as some Ghibli Studio films like Grave of Fireflies are not for children. Anyway you look at it though Ni No Kuni is a game not to be missed, and 10 years from now I bet will be one of the most desired games for collectors to own on PS3. I have never gave a game a perfect score and i’m not going to change that with Ni No Kuni. I would give it a very high almost perfect score though. It is probably the best RPG to come out in the last few years, and maybe in time will be considered one of the best of all time!

Ni No Kuni: Wrath of the White Witch Gets

One thought on “Ni No Kuni: Wrath of the White Witch Review”