Special Forces: Team X is developed by Zombie Studios. This company is known for its BlackLight series. Seal Team X is a Third person shooter with a cel-shaded art style.  Borderlands meets Socom. The game brags about its maps and customization Options. Is it really that great? Over 100 combinations for maps is a terrific idea, how well is it implemented? It’s a mixed bag. Levels are separated into tiles. Players will vote for the maps they wish to play. Which ever three sections gain the most votes, will form together into one big stage. This is a cool feature indeed. While the areas aren’t poorly designed, there isn’t a single map in the game that will grab you. Not that it’s a terrible thing,  but I could care less about voting since theirs no standout in the lineup.

The firearms are typical military issue, with upgradable scopes, and other various attachments. Shooting feels smooth and responsive, this is the most important thing to have down, and STX gets it. More special weapons open up as you progress. Chainsaws (Yessir!), Attack Dogs, and other deadly objects add to the chaos. There isnt any practice modes (so enjoy getting owned for a bit), but STX has a career mode of sorts. It’s a list of goals they want players to achieve. Get 50 double kills , 150 melees, exc.

Goals met gets the XP. The Standout XP earner for me, is the teamwork aspect. Gaining kills near teammates earns more points. Stay in a group for a long time, you’ll gain even more. XP unlocks more Player Skins and Camo Designs too. The clothing options are pretty good in here, but there’s only four soldier skins, expect to see many people with the same faces. Maybe they’re all Universal soldiers.

The variety of modes helps out in a big way. You have expected match types like team deathmatch and Capture the Flag, but there’s more. High Value Target. Whoever is the HVT will earn more points per kill, and Players of the opposition earn just a single point. This is why they must take out the person asap. Control point has teams holding down the random areas labeled as: A,B, and C. Hold down all three and win. The community size is decent. I was able to get into many rooms without problems. Lag is almost non-existent, but you will run into a couple of bad matches.

Team X’s Presentation is basic. With generic military music, and dull colors, it works for some shooters, but not this one. I found this to be a little disappointing. Developers who use the celshaded style, need to take advantage of the cartoony hues that go along with it. When shooting enemies, the HP you take away is shown on-screen like Borderlands, but the effect is lessened by the soft color values. The Locations, and Characters, really need some flavor. For this price Special Forces: Team X is a shooter that won’t win any awards, it’s not premium priced either. While the presentation is topped by many other shooters this generation, the mechanics and modes keep this game worthy of your time.

A capable cover system and team work incentives brings it home for 1200 points. There are Attack Dogs and Chainsaws man! Basically it’s for people who want to shoot things, in a game that isn’t ‘Call of Duty’. 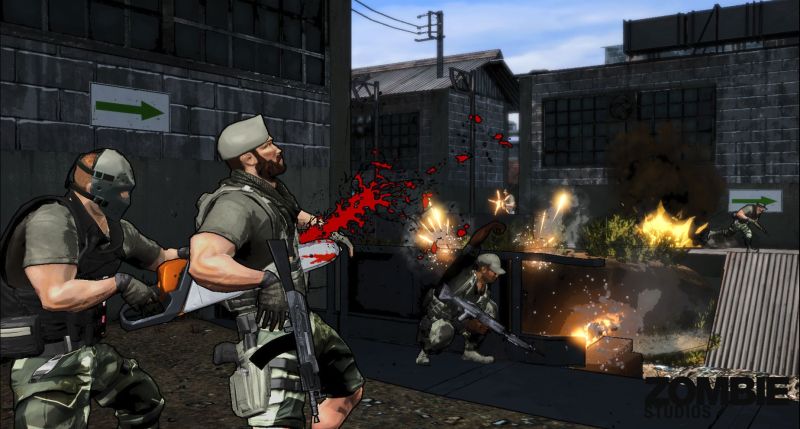