After the dust settled from Halo 4’s massive arrival many fans where left with a bad taste. Some fans voiced their opinion to only be greeted by the typical “oh there’s a patch coming” response.The problems ranged from weapon balance, lag and the dreaded in-ability to access specializations. Many of the complaints could have been forgiven if they had gotten resolved within a reasonable time frame. As a fan of Halo it pains me to even think that my favorite franchise is headed into such a bad direction. This article is not intended to bash but rather point out were 343 failed due to focusing on the wrong things.

Beta beta beta, much like Kj pointed out before it’s release, “This game needs to have a beta”. I shrugged it off figuring that 343 had done some intensive internal testing. True to his fears, the game eventually spiraled down to the point where at times it was unplayable. What is infuriating is that fact that I among others kept getting matches with folks across the ocean. Why wasn’t there an option to choose region, or even good connection? The recent addition of the forge playlist only made matters worse. Hit detection seems really off and the frame rate dips to an unacceptable range in forged maps. Instead of blowing money on forward unto dawn’s mini series or live action commercials they could have used resources on creating a beta that could have removed or minimized some of these issues. Leave it to the big wig corporate types to make the right calls huh?

As if that wasn’t enough they added insult to injury by lying, getting caught, lying then lying some more. When issues arose about the specializations for Halo four, 343 kept mum until the community outcry was so severe they decided to have Admins boldly lie and proclaim in three different occasions that the codes had been sent, only to re-assert it each time and each time being a lie. As opposed to managing the community properly, The admin would rather post pics of her botched pedicures and try to buy community forgiveness by giving away codes on twitter. Really? Not to mention that they upset those of us who paid for the limited edition by giving away part of its content to those who had not paid for it. When those of us who paid for the content “which was the first map pack” raised Kane, they turned around and said it was a temporary trial as a token of forgiveness for having messed up the codes for specializations. Without any prior mention of their intent they had successfully pissed off their entire community. Well, at least I can forge. Right?

Forge has more issues than I care to address, but I will break it down. The biggest draw of forge is sharing, so how can one share if the tools given do not function properly? Everything from uploading maps, weapon and spawn placing are riddled with glitches. Let’s say you had the fortune to get everything to function, even then forge makes it impossible for folks to find your content. The stupid search in forge rarely functions. But hey folks, let’s not complain when we can read stupid Halo bulletins instead of getting our issues addressed and if they are addressed it’s one the population number have dropped. Seeing as how the forge playlist is plagued with lag, I see no spike in population anytime soon, even with griffball coming in the near future.

Perhaps the next map pack will give the numbers a boost as long as they are the complete opposite of the first. The maps in the first map pack did not feel at all like Halo, more like Killzone due to their scale. Halo’s arena feel is lost in the size and design or lack there of in the first map pack. The maps , while not great are still welcome due to the poor handling of map rotation. It feels like I am playing the same four maps everyday. Let’s talk about Ragnarok, didn’t we get enough of Valhalla in Halo 3 ? C’mon! Yes we want a familiar Halo feel to the maps, not the same maps. Even the forge playlist has a poor remake of lockout. The maps chosen for the forge playlist are nothing short of garbage, I’m not hating …just being legit. About 90 percent of the maps are donut shaped two-floor structures, wow …that’s creative.

Far more important than some of the prior issues is weapon balance. The more I played Halo 4 the more the lack of balance became an issue. The boltshot is way to overpowered to be a secondary weapon. The DMR is a monster when compared to the battle riffle. Why even put the battle riffle back in the game when it’s a water gun when compared to the DMR? The scattershot is inconsistent and by this I mean that I can shoot someone in the face today and they die but tomorrow it might mean they could hit me with a plasma, then melee, followed by a victory teabag. Grenades are another emotional weapon that vary in response, especially the sticky. The sticky grenade can be stuck to an opponent and slip right off? Yup in Halo 4 the sky’s the limit.

It pains me to see my favorite franchise head down this dark path.

I don’t know what the future holds for 343 but it’s not looking good as of now. I still love the campaign and tout it as one of the best. When it comes to the on-line and the community aspect this game has been a massive let down. I will also be re-grading Halo 4 from its previous grade down to 3 and a half Mf’s. I have a completely different opinion of the game having had the months of frustrations only get worse the more I played. We all had high expectations, some where met while other were crushed under the weight of hype and bullshit. Perhaps their next go around 343 will place most of the finance on the game’s mechanics and on-line as opposed to just marketing and poor community management. 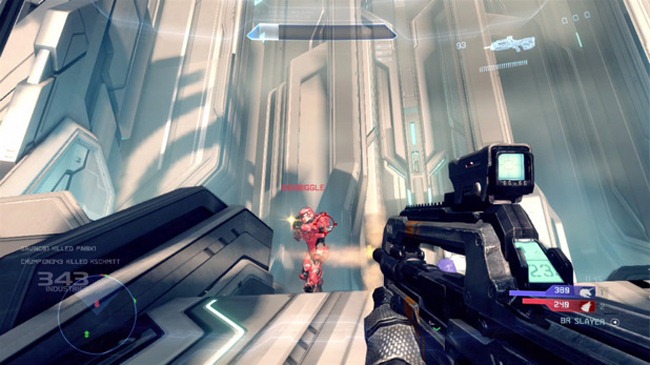