It’s not everyday that a title from a billion dollar franchise gets released, yet alone by a newly founded company. Halo is a franchise that has become a culture spanning over ten years. Bungie passed the baton to 343 industries a few years back leaving many to wonder if it was a smart choice. As time passed and the release of Halo Legends and Halo Anniversary eased the wait for the next Halo as it also assured us that there was TLC being used by Halo’s new developers. Most of us “gamers” who are old enough can remember the impact that Halo combat evolved had on the gaming industry and the world. The secret to this success lies in its stellar story and addictive game play, but after a decade long run will this train lose it’s steam?

It’s difficult trying to write this review without letting my enthusiasm show too much, this game immediately pulls you in. Don’t be fooled by fan boy reviews this game is the best looking Xbox game to date, hands down. After being greeted to an amazing introduction video you are led to the cryo tube where we last saw Master Chief in the Legendary ending to Halo 3. Immediately you start to notice that the visual improvements are not limited to the cut-scenes. The visuals make you wonder just how much juice is left in the Xbox 360. Halo has a history of placing game play over graphics even tho Combat Evolved for its time did wow, later games in the series never did make such an impressive leap. Mission after mission the scale of the game continues to grow and impress, this isn’t just some scripted corridor shooter that sacrifices scale for the sake of graphics. Each stage has a level of detail that makes one want to explore just about as much as shoot. The lighting in this game exceeds anything out on any console at this moment and that says allot. The art style remains familiar while at the same time displaying a grittier vibe. The multiplayer and spartan ops portions of the game share in the same visual greatness and don’t render a significant drop in fidelity. Enough about the graphics..Does the game-play raise the bar, or does it at least feel the same?

I have played every Halo ever released  and can assure those of you who haven’t touched it that this is very much Halo. The controls have been modified a bit to accommodate the new default sprint feature, but not enough to affect the core game-play that the franchise is known for. The shooting, jumping and aiming have not changed, making you feel right at home. The guns in Halo haven’t changed much in the last decade, that is until now. The new weapons on Master Chiefs collection are a much welcomed addition, especially when facing the new enemy types. The covenant A.I. in the Halo series has yet to be matched by any game in the last ten years, Bungie set a bar that was not matched until 343i introduced the Promethean enemy class. The firefight that I met on my journey in the game where not only tough but far from cheap and yet very rewarding. Most developers now a days make the difficulty setting feel really cheap by having the enemy become capable of killing you with fewer bullets all while increasing the enemy count. 343 Industries on the other hand took a page from Bungie and made the enemy behave more intelligent and aggressive. The size of the fights are not hindered by the graphical upgrade, matter of fact some of the skirmishes are even grander in scale.

Vehicle face offs are a part of the Halo tradition not forgotten by 343i, certain levels contain combat that could only be survived with a trusty Warthog , Scorpion or Mantis. Mantis is a new addition to the universe, it’s a mech that many thought would be a cheap addition to the sandbox fearing it would be unbalanced. Fear not, great care was taken with each new addition of vehicles and weapons, so as to not spoil a great thing. So far from what the graphics and game-play had shown the story was in great hands.

The Halo universe tells many stories but none more important than that of Master Chief and Cortana. As gamers we have waited patiently for 5 years to find the answers to the many questions posed by the ending of Halo 3. From start to finish, many answers are given and even more questions are presented bringing even more depth to a story many have failed to compete with. The narrative is very emotional without delving into corny territory. Halo 4 will wow fans and non believers a like. New characters are introduced from both sides of the struggle, villains and heroes alike are both fleshed out by some of the best voice acting to date in the series. The quality in Halo 4 makes this one of the most well-rounded games in recent history. Microsoft’s handling of 343i and it’s IP is a confirmation of their recognized value for their billion dollar franchise. The campaign portion of Halo 4 would be enough to justify a 60 dollar purchase, but Halo is known for far more than just single player. After completing the campaign my expectations for multi player where thru the roof. 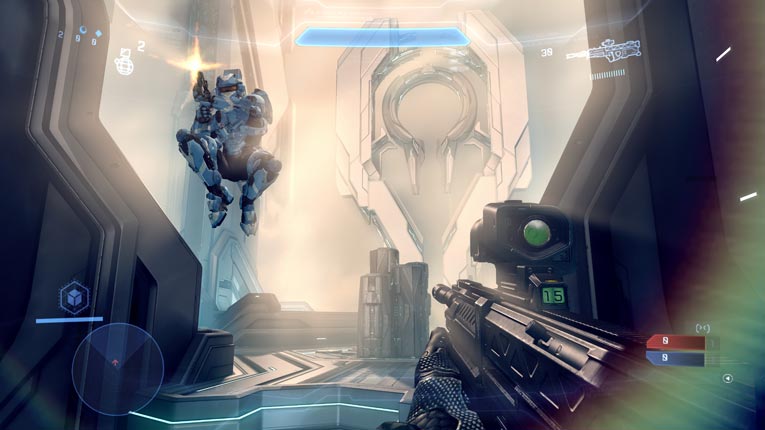 In order to give you good folks the most legitimate take, I sat a whole week with the multiplayer in order to gauge both the ups and downs. Most reviews give you a perspective based on the minimum pre-release traffic which I consider in-accurate. Halo four had the highest release traffic than any Halo prior to the big 4. I would love to tell you there are no flaws, but it wouldn’t be legit if I did and that’s just not in my pedigree. My biggest peeve is that fact that regions keep getting crossed with the host going to the folks across the big blue sea. Lag reared it’s ugly head, but not as often as previous titles. What is really funny is that this game runs better than Gears of war’s supposed “dedicated servers”. For a couple of days players were unable to play with friends until 343i took action faster than most developers would and nipped the issue in the butt. Once the game was in it’s full swing those issues were forgiven but not forgotten. The addition of new weapons were cool during campaign until I was on the receiving end of the saw and the Promethean incinerator. The shot-gun is overpowered when compared to other Halo’s but it’s hit radius is greatly reduced. The assault rifle is also beefed up in order to compete against the increased arsenal of destruction. The multiplayer still feels like Halo, but some guns like the saw feel cheap and out-of-place in the Halo universe. The sound is something that stands out far more during the multiplayer, each of the guns have a power full sound that adds punch and character to each weapon.

Weapons of destruction are not the only ones available at your disposal. Forge tout’s and even greater pallet for creative itches this time around. With greater options of forge maps matches are sure to be more exciting than some of the bland matches of constant grey found in Reach. Many of the pieces offered to build are familiar but most of the focus was placed on making forge easier to use. With a wide range of improvements from self shadowing objects to being able to magnet pieces together, forge in Halo 4 puts prior iterations to shame. A word of advice to 343i would be to make it possible for us to upload our maps much like Far cry does. Night and day environmental changes would also be a welcomed change. One of the most interesting additions, is the Trait Zone. Trait zones are custom fields that allow you to change the physical properties of Spartans in the zones they are placed in. Not all the credit goes to 343i tho’, Certain Affinity helped them with improving the design in multiplayer and Forge. I can sit here and bore you with all the details, but it’s best you immerse yourself in the splendor that is Forge and enjoy the vista of the stunning maps. 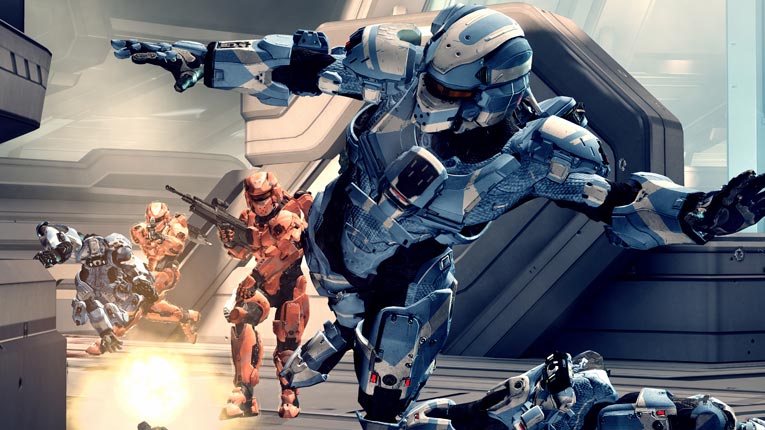 Location location location… Unlike Halo Reach’s approach of copying map locations from the campaign Halo 4 designed some of the most impressive maps in the series to date. The maps in Halo 4 smoothly adapt to each of the multiplayer game modes offered. My gripe with the multiplayer right now is the map rotation, there are three maps that I still haven’t seen in the playlist and then there are maps that are in rotation too often. The Halo playlist offers a wide range of classic game types from capture the flag to oddball, not to mention slayer and big team slayer. Infection got a much welcomed upgrade titled Flood in which player actually transform into infected Spartans instead of just changing color, even the HUD transforms. New game types such as dominion and extraction help Halo 4 compete against other shooters with similar game types. Regicide tho’ touted as new is nothing more than a new take on juggernaut. Cry-babies have complained that Halo is turning into Call of doo doo due to it’s ordinance system and newly added custom weapons feature, fret not it’s still Halo. Kill counts are no longer the main road to victory in Halo, a point system is now the key to victory giving players points rewards for everything from assisting fellow players or distracting enemies. 343i is moving Halo forward in a new and better direction, minus it’s few flaws this game is a pure example of what happens when you mix passion, talent and money. Microsoft has thrown a budget behind this title that is clearly reflected in it’s quality. Not only is this title a quality purchase it’s also a GOTY contender.

+ It’s a clear indication with the quality of this game that the next ten years of Halo will be even greater than the last.

– Some connection issues during launch

– The hatred of the ever childish fanboy shrugging of this GOTY title as nothing more than an FPS love story.

One thought on “Halo 4 Review”