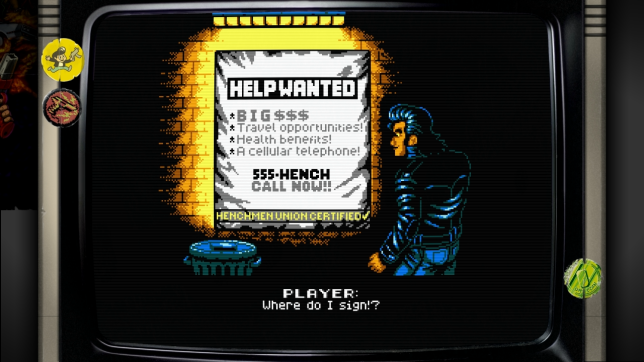 Retro City Rampage is a new title developed by VBlank Entertainment, which is available as a digital download for PC, Wii, PS3, XBOX Live Arcade, and PS Vita. Retro City Rampage began as a NES homebrew project about 10 years ago by Brian Provinciano, with a little help from a few musicians. The game could best be described as a 8-bit Grand Theft Auto, with a little charm. The one thing that does set this game apart from Grand Theft Auto is indeed the charm this game offers. There is so much stuff about vintage video games and movies from the late 80’s to early 90’s, that even I can’t pinpoint every parody. Everything from simple stuff like a marriage chapel called Bundy’s Marriage Chapel that pertains to one of my favorite shows Married with Children, to car-jacking the Teenage Mutant Ninja Turtles van from the NES game. There’s even entire stages in the quests that are reminders of your favorite NES games. One stage is a parody of the vertical stages in the original Contra (or Probotector for you Europeans), where you have to destroy the lazer mounting on the walls and blow up the doors while evading enemies. There is even some parodies of newer movies and games like The Dark Knight, and Minecraft. I’m not going to get much into detail because for me half the fun was noticing all the cool stuff from my childhood. Just know that if you lived in the 80’s and enjoy reminders of the good days of video gaming, and you know what a 72-pin connector is, then you will feel right at home. 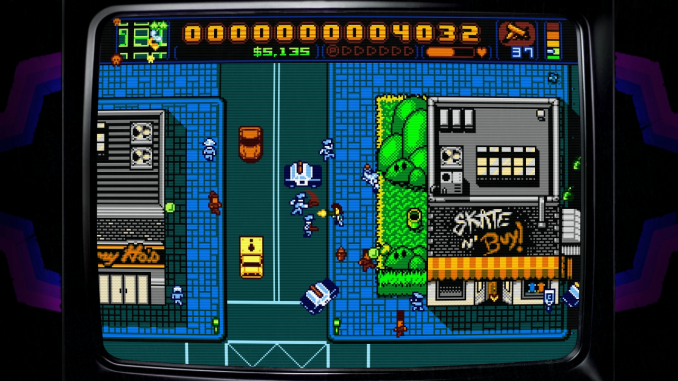 In the game you run around, steal a vehicle, run people over, run some more over, evade the police, stop in a shop and get a haircut, rob the shop, go out and run more people over, hop out of the car and shoot a few citizens with a rocket launcher, go find a mission, and repeat the process. At first this may sound a little repetitive and boring, but there is plenty of stuff to do along the way. The game follows a story in the beginning before eventually giving you freedom to continue the story, or go out in the city and look for side quests, or just drive around and visit shops, and look for mini games. Throughout the city there are all sorts of shops for buying different items. You can buy new haircuts, faces, drinks at the bar that make everything kind of wavy for a minute, and lots of other cool and interesting stuff. There are lots of hidden mini games to stumble upon to keep you busy. One of the games requires you to shoot as many people as possible with a rocket launcher and stay airborne, and another that requires you to run people over to score points, and another one where you steal a cab in attempt to be an upstanding citizen for once and earn some money. The controls in the game work pretty well as long as you use a controller. For PC users I highly suggest a controller because the keyboard controls are hard to use. You basically run around with the D-Pad or analog, and there is a fire and jump button. You can also hide behind objects for cover fire, and cycle through various weapons, as there are lots of interesting and fun weapons to find and use. You can also cycle through music when in vehicles if you need a change, or the music isn’t to your liking. The game controls about as you would expect from a NES game which isn’t bad and shouldn’t give you much trouble.

Retro City Rampage looks like a NES game, therefore the graphics are not amazing or anything. However, speaking in terms of a NES game they look pretty damn good. If this title had been released in the days of the NES the graphics would be among the best on the console, without all the flashing on-screen. The 2-D cut-scenes are also very impressive in NES terms. Right up there with the Ninja Gaiden games. If you’re the type of gamer who only cares that a game looks amazing and don’t really pay attention to gameplay, and story then this won’t work for you. However, if you enjoy retro games you should be pretty happy with the presentation.

Like the rest of the game there is a lot of music taken from other games only slightly different. And some of the music sounds like it is original to this game. I feel like they did a pretty good job with the music, and there’s really not a lot to say except that it’s pretty good and you can tell they spent a good amount of time working on it.

Surprisingly enough there is little online included in the game. You won’t be joining up with your friends or anything like that, but there are online leaderboards. Also, from what I can tell when you play all the little mini games you are automatically added to the leaderboards. Which is always a plus in my opinion. Would it have been cool to join up with friends in-game and kill stuff? Yes, it would have. Is it a big deal or do I really even care? Not really.

Seeing as how the game is highly customizable we are going to talk about the options for a minute. This is one of the ereas the game really shines. There are so many graphical options it will make your head spin. Which is a good thing. You can go for a modern look, or even pick some classic video game graphical options from the past and make the game look like it was made in the 70’s. You can even choose to have scanlines for a classic NES 4:3 old school television look. There are lots of skin options also where you can have the game look like your playing through a vintage television with many to choose from, and my personal favorite the arcade skin with classic marquee included. If you are like me you will spend a great deal of time messing around with the graphic options because there is so much there and something for everyone’s personal style. This is in my opinion one of the best parts of the game. This should be mandatory for all classic retro games!

I feel like Retro City Rampage has a little something for everyone. I’m not even a fan of Grand Theft Auto games but I am really enjoying this title. The story is pretty good, the graphics are great in terms of the NES days, the game controls and handles well, and there is a nice touch of online with the leaderboards. Not to mention the plethora of graphical options add a little something special to the game. If I had to find something wrong with the game it would be that you can’t join players in-game, but like I stated earlier I really don’t care about that. You can really tell that this guy loves video games and he poured his heart into making this title. It is people like Brian Provinciano who are making a stand and keeping retro gaming alive. Retro gaming is about love for video games, not throwing out some unfinished garbage in attempt to make a quick buck. And heart is the only reason retro gaming is still alive. People who make games like Retro City Rampage need to be supported to keep this genre alive. That’s why I am going to recommend buying this game. Support the people who love games, not the people who love money.

+Lots of extras to keep you busy

-Controls could use more precision