Kingdom Hearts: Dream Drop Distance, which I will now refer to as KH3D for sake of my sanity in writing this review. This is the seventh installment in the Kingdom Hearts series of games. For anyone who has kept up with the series, you’ll know how hard for me it is to describe the story line. Unfortunately, the game is intertwined through some type of fourth dimension of time it seems. It is comparable to the story line of the Matrix movies or Zelda franchise as it is so very complicated that it transcends my true understanding. However, for all it’s complexities I truly enjoyed the game, in fact I’d go so far as to say I enjoyed this one more than the last few games in the series.

The Disney plot points that we have all come to love about the series and some quick action make for an addictive combo in this game. I found myself at times unable to keep the 3DS much more than a few inches from my face with the sweet melodrama of the cut scenes. The only problem I can see with this is that I haven’t played a Kingdom Hearts game for some time as I’m sure other people haven’t, and some of the unusual verbiage becomes lost to me. I can imagine someone who has never played the series before would be extremely confused. 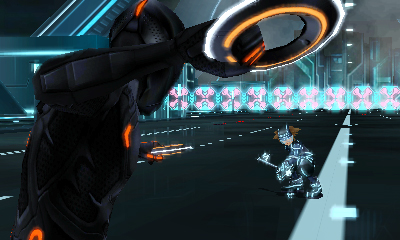 Throughout the game you play basically two different storylines with two separate characters: Sora and Riku, alternating between the two on a constant basis. In some ways I like this idea as it keeps the game fresh, although I don’t think it helps with the confusion of the story line much. I found myself wondering what my objective was when I switched back and forth between the story lines. It was the type of feeling you get when you attempt a complicated game and have to come back to it a month later knowing you forgot exactly what you were in the middle of, except it happened almost every time I picked up the game.

The controls of the game are familiar in the series and are easy to pick up and get the hang of. Physical and Magical attacks are at the players disposal, along with a plethora of combination moves. Special animal characters can be created using dream pieces collected throughout the various environments, and then become another tool at your disposal in the game.

Some of the Disney story lines we come across in our adventure: Pinocchio, Hunchback of Notre Dame, Tron, and of course Fantasia. Each part of these recreations are absolutely stunning on the 3DS, full of colorful and lively scenes and wonderful graphical enhancements of our much-loved characters. Along with Disney visuals we are gifted with beautiful Disney music and sound effects, not to mention some pretty great voice acting, creating a truly well-rounded experience.

One of the downsides is unlike the recent platforming games I’ve played this game takes a more A to B approach in terms of gameplay. There is really  no exploration aspect which is disappointing as the gorgeous environments entice me to explore, and I am only disappointed with vast nothingness.

If fighting, creating your own fun characters, running through a descriptive story line, or enjoying the excellent visuals isn’t enough there’s always Mini Games! Between each level there are mini games to conquer such as tron racing, skating down an intense never-ending slide, and flying through a portal while collecting items.

Overall I truly enjoyed this addition of Kingdom Hearts. While it has room for improvement overall I cannot resist its charm and subtle details, and as always am sucked into the universe of KH3D by the whimsical characters. This is a game to own for the Nintendo 3DS and an honorable addition to the series. Unfortunately I must always keep the score Legit by considering the negatives, though I’d love to be able to give it a higher score.

+Story (if you have followed KH),

-Story (if you have not followed KH)