Just in case you missed it, I have put together a quick description of some of the details from the amazing video showing off some of the feature’s of the Wii U. The name of the controller has been branded the GamePad, the controller is redesigned and inspired by what gamers called the classic NES controller. The gamepad contains various features including the ability that lets you use the controller as an infrared TV remote. Nintendo has also stepped up their on-line by introducing Wii-verse. 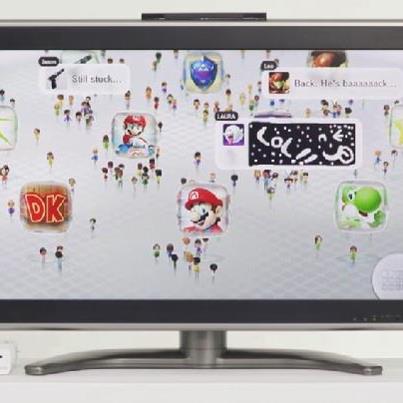 Get connected through Miiverse – a network service where you can share all your great Wii U experiences with your Nintendo community. Miiverse lets you communicate with other players in lots of fun ways. Whether you need help getting through a game or just want to show-off something to your friends, it’s all about sharing your experiences. Nintendo stated that it won’t be available at launch, but it will be available later not only on the Wii U but your smart phone, 3-DS and PC as-well.

Nintendo has also announced an alternative to the large game-pad named the Wii U Pro controller. Looking to draw inspiration from the design of the xbox 360 control, Nintendo seems to be taking aim at the hardcore with this reveal. For more details on Nintendo’s impressive vid, click the link and leave your thoughts. I’m not gonna lie, I was really impressed and hope to see more details at E3. So sit back click the link and enjoy because it looks like Nintendo is ready to kick butt at E3.