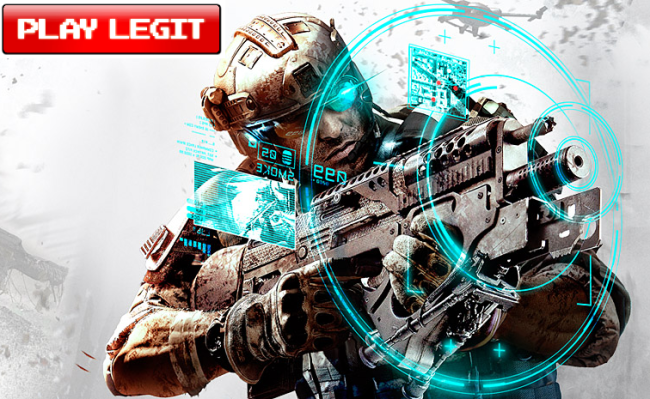 Hey y’all this is the infamous Trucker Ninja here to help you Play Legit. So I cracked open the game Tom Clancy’s Ghost Recon Future Soldier to see what goodies it has for you. First I was pretty impressed when first pressing start. Games made in Tom Clancy’s namesake are always long and paint a story that some games should take note of. The level of detail has remained a constant going all the way back to the Playstation 1. Not to kill some of the story You play as the Ghosts, a four man team going on insane future soldier missions using high-tech gadgets.

That is the main point this is a stealth shooter. You use active camo just by crouching and  keeping out of sight. It’s not like some games, when you camo you’ll disappear. In this one you’ll kinda just seem blurry.  Combined with a pretty decent cover system that takes just a few tries to get used too then its game on.

This is one of the few titles i would compare to gears of war 3 with its cover system being this awesome. It earns major points. You don’t unrealistically slide to place, you do kinda a crouching run to cover. This is massively useful and adds realism to the game. Jumping over stuff keeps the gaming fast pace and the struggle for life still there. Don’t get me wrong as much as i love going HAM on a room of people you don’t really get the option to do that and live that much. Your not a bullet sponge you will die if you go in shooting like this is Call Of Duty or something. I find it more of a challenge. Go figure.

Breaching, Checkpoints, room clearing, these are things that you will do a lot! This campaign is long its a tad repetitive but honestly the story is worth the hours. It will make you think this is your job. But your AI team is literally insane. Some missions they are on point obeying master marksmen Hollywood A-Team beasts whom kick doors just to find your mother sister brother there and eliminating them with no thought of remorse. Or, they are poor aiming disappearing (in a bad way) or not healing you when you have fallen to the ground waiting for a revive they will just stare at you sometimes.  AI is an important factor it kinda confuses me how a game could be so on point with keeping a story, fun weapons to play, with predator style (on a budget) stealth. This is 2012 this ain’t rainbow six. Which leads me to the visuals. If your dude is not equipped all the way up, the face-models are pretty much a joke for this day and age. Its simply no longer impressive.

Now lets talk multiplayer its pretty darn fun, maps are not just standard boring team deathmatch kill each other rinse and repeat.  Fun concepts that really involve teamwork not just lone wolf tactics total potential of sitting on my shelf for a long time. There are lots of places to hide and be a camper, but you won’t last long this is a constant stealth movement. Don’t get seen and win is the motto!

+Campaign is worth the dime, you won’t breeze through it

+ Upgradeable Weapons are a key feature of this game

+Cover system is on point