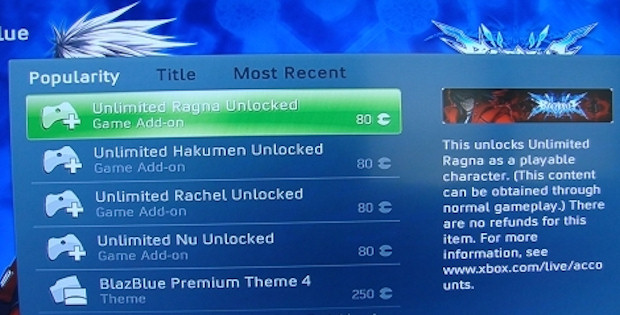 As the gaming industry continues to evolve, Downloadable Content is becoming one of the biggest factors in this transition. DLC has extended the life of games we enjoy, but has also damaged it – thus tainting the experience. We understand that DLC isn’t going anywhere, but in this article we will try to break down multiple ways to make it more enjoyable. Remember the time when you could enter a cheat code, or earn weapons and clothing by playing the game? I guess that time is over. It sucks, but maybe we could get some sort of justice in this modern-day of gaming corruption.

Let say I bought an Outfit for use in Ultimate Marvel vs Capcom 3. Those that purchased Chun Li’s Alternate knows that she’s wearing her suit originally from Street Fighter Alpha 3. What if we could take that clothing piece everywhere she makes an appearance? Super Street Fighter 4? You bet. Street Fighter x Tekken? Absolutely. It would be one set price. Generally costume packs are there to take advantage of impulse buyers, so why not make it worth their while and everybody else’s. These costume bundles can get extremely expensive, so why not lighten the blow a bit. Some titles offer rewards to people who have played their previous games. Gears 2 players that beat gears 1 unlocked exclusive items. It would be like that, but with money attached.

The Early Bird gets the Season Pass

Game Publishers do not want you buying their games used, hence the origin of the online pass. The people who run out and get it within the first week, are true champions in their eyes. The customer’s efforts should be acknowledged. If publishers cared about the consumers, they wouldn’t have the pass to begin with. Since it exists, ive come up with a season pass plan. Anyone that purchases a game within the first 1 to 2 weeks of it being sold, would receive all the future installments of DLC at the nice price of: free. This could mean future characters, Map packs, clothing, extra audio or any various items locked away on the disk. Also any EA sports games wouldn’t require an early bird player to enter those obnoxious foot-long codes (THIS-ISPO-INTL-ESS). Publishers many times use DLC to cut their losses any way that they can. If they could somehow influence people to get these games on day one, and make it worth their while, everybody would benefit. Pre-ordering a game just to get a multiplayer skin, isnt going to cut it.

Can’t say ive meet a gamer that loves day one DLC. It’s as if your purchase has been cancelled out, before you could even open the box. the ones that personally piss me off, is the content hitting the dashboard before the game has even released. Companies that have a track record of “getting it”, reap the benefits. With Batman’s Arkham City DLC adventure releasing shortly, it has drawn a lot of positive buzz from the gaming community. Gamers were treated to a title jammed with content and quality, had plenty of time to enjoy the experience and now they are ready for this next chapter. Valve usually releases free content long after their game has been released, thus revitalizing the game. When gamers get treated well they are willing to support your company and its software. Rockstar games has a laundry list of DLC that could stand alone as separate retail titles. The effort seeps through the game. Publishers remember that there’s other games coming out with DLC, try to out do your competition. The Street fighter x Tekken character locking is a joke. There has to be a better way to make money from DLC that’s profitable for both parties. Capcom has reported sluggish sales for SF x Tekken, so obviously gamers aren’t ready to lay over just yet. People respect hard work and that will never change.

DLC is a great concept, but it has been abused for far too long. There has to be some sort of balance.