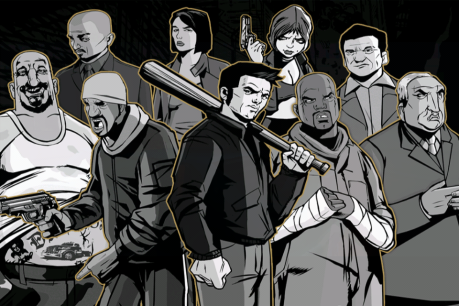 Wow 10 years. Has it really been that long? I’m sure for many of you this game will take you way back. After the smooth piano intro started playing the first time I loaded the game, I was transported to a simpler time. No bills, no job, the only problem I had was my little cousin not having a memory card to save our progress.

Fast forward to what apparently is 10 years later, and this game has aged better than I have. It’s all still here, all the mission, the great voice acting, the hilarious adverts in the radio stations, everything except cheat codes. I remember the first time I did a 13 minute rampage across the city while listening to Lazlo’s radio station. Memories like those are priceless.

Anyway, onto the review. GTA 3 is the daddy of the open world genre we know today. It was ambitious for its time. The first of the series to go 3D. Your name is Claude, betrayed by your lover after a bank heist, and almost sent you jail, you now have to start from the bottom, climbing every single step up the crime ladder to confront those that betrayed you.

10 years later and the story is still the same. Meaning it’s just as great as when the game came originally came out. GTA 3 was the first game where I actually paid attention to the voice coming out of the characters. Claude may be silent, but the Other characters are brought to life with the voice acting. It’s not just the characters either. The radio stations themselves are like real radio stations. Save for the hilarious adverts like petsovernight.com and yes, that is a real link that you can still visit 10 years later!

The graphics have been given an HD treatment so it can look all nice and shiny on your phone. I’m playing on an iPhone 4, it may look different on a 3GS, or an Android phone so I won’t get into specifics. It runs smoothly, I ran it with multiple apps open and it only slowed down if I got an email notification (most apps do for some reason).

I usually play with my sound muted and no headphones cause I’m at work or church and don’t want to be too conspicuous. I said fuggedaboutit when it came to this game. You just can’t play this game on mute. It’s just not right. I’d rather not play the game if I can’t enjoy the radio stations while I’m driving around liberty city. 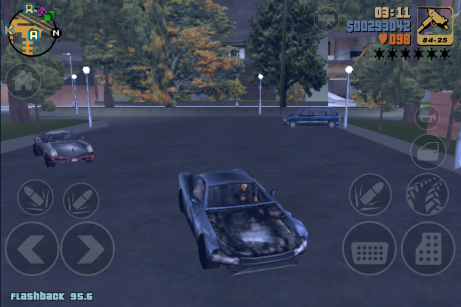 The controls are probably something most people would worry about when porting a game over to a touch screen phone. Most people complain about the virtual buttons taking up valuable screen space (understandable), and others would complain if the controls were gesture based (too many actions to use gestures here). Don’t let the default layout intimidate you when you first start the game. It works. You can change the layout if you want, but the default works. I’m actually a better driver now than when I played the original game.

I couldn’t put this game down when I started playing, and I’m sure it will be hard for you too. This game is 4.99 in the app store. Its cheaper than infinity blade, and it’s the full game. There’s no extra DLC, or anything you need to pay to unlock. The full game is 4.99 (price may or may not be different in the Android market). They practically give you the game. With that price, the replay value, and the nostalgic land of Liberty City, its hard to give this game a low rating.

Whats perpetrating?
-No cheat codes yet 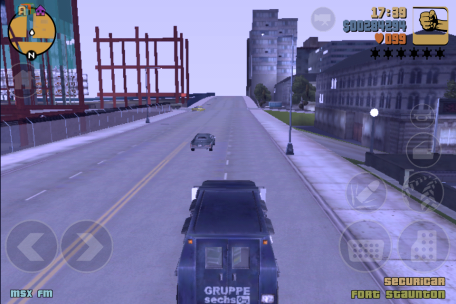