Back in October 2010 Def Jam RapStar (DJRS) was released, produced by 4mm Games and published by Konami. DJRS is a karaoke based game featuring rap and hip hop songs. For me it was a purchase earlier this year. Being a rap and hip hop fan I felt it was something of interest to have in my gaming collection. I wasn’t expecting much, as most karaoke type of games don’t hold my interest. Once DJRS entered my console and I sung the first song I was hooked.
Before I go on I wanted to mention that the servers and website for DJRS were turned off on October 5, 2011. Much to the surprise of the players, it was only a year from the release of the game. This interferes with 3 achievements/trophies that require uploading your videos onto the website. Prior to October, Def Jam’s James Waller mentioned they were working on DJRS 2. However, since then no word on a sequel has been shared. And with the servers going down it leaves players wondering if there is anything coming out next.
I recommend for anyone interested in rap and hip hop to check out DJRS, even without the servers being available. If you can pick up the game and mic together for a reasonable price I’m sure you’ll enjoy it. You still can earn the achievements/trophies, aside from the 3 unavailable, and pump your gamerscore or trophy count. 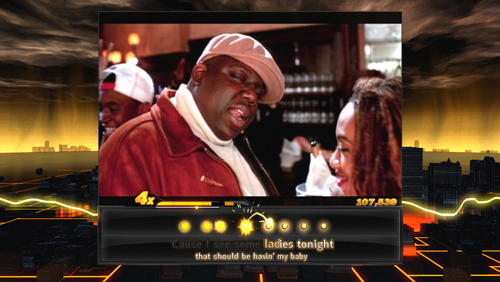 The solo “career” portion of the game has easy, medium and hard levels – I started on hard hoping for a challenge. You progress through songs on 5 stages and your success unlocks various challenge styles. Challenge styles range from singing endurance, pitch holding, lyric accuracy. You earn mics after each song performance based on the success of your rapping, 5 mics are the max. Proud to say I score “Off the Chain” (earning 5 mics) on every song. After completing the career portion of the game you can then unlock the ability to play on expert (across career or party mode), allowing you to remove the lyrics and try to platinum the song. You also unlock stickers, visual effects and other items to incorporate into your videos.
The “party” mode allows you to sing any of the songs on the game (provided or through DLC) without it interfering with your career. You can sing solo, duet or battle from your console.  Party mode is also played on easy, medium and hard levels.
“Freestyle” allows you to place your own lyrics to provided beats – creating a freestyle flow. The only real freestyling I did was a rap called “Yo Mess”. It was dedicated to all those players on the game who post videos of their rapping and the rooms they are in are a complete disaster. Half of the videos I seen had good lyrics but I found myself shaking my head, not listening to their words, but thinking “really, why does he have 40 pop cans sitting on the end table and what appears to be trash all over the floor”. So, my first freestyle posted was dedicated to them. 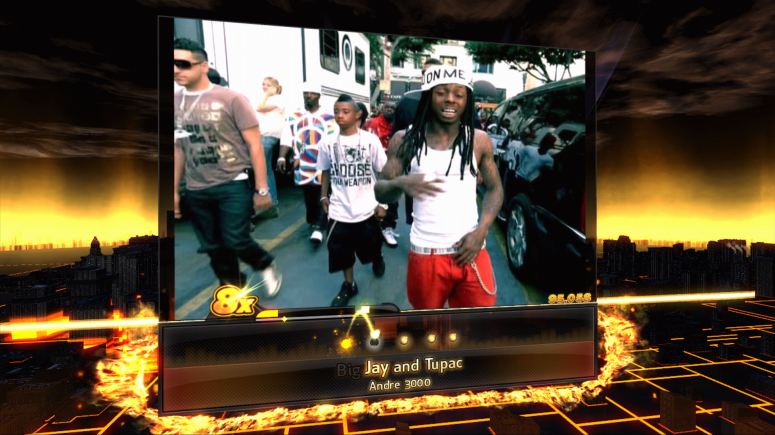 Over all though, I am satisfied with the game. It has both some old school beats and current hits. You begin the game with songs, not having to purchase or unlock anything to get started. As you progress through the career and complete song challenges you do unlock additional songs. There were songs available as DLC purchases from the “store”. I found that I sing a bit faster than some of the songs, so the quicker lyrics are the bomb for me.  I’ve come to realize I’m a better Method Man than Fat Joe (which is aight with me). I’ve learned I’m an off the hook Eve and Missy – can’t stand having to sing songs that have Rihanna in them! Want a challenge? Sing Rapper’s Delight, on expert.
Def Jam Rapstar gets MF MF MF out of five

+ Song selection has something for everyone.

What’s perpetrating ?
-Lack of support for players under the website and Community HUD.

One thought on “Late 2 The Party Review: Def Jam Rapstar”