In the second map pack brought to us for Halo Reach Bungie has…Oh wait Bungie didn’t develop these maps, but merely play-tested them to an extent. At the helm of development, lies Certain Affinity, who are not strangers to the Halo series. Not only are they responsible for making the last map pack for Halo 2, but one of its founders is a Bungie veteran. This somewhat eased my fears that the maps were going to suck, but I was still skeptical.The defiant map pack is made up of two multiplayer maps and one firefight.

The firefight map is called Unearthed and it’s definitely the biggest one yet. The map plays well in score attack (solo mode) but it plays way better with a full squad of four. It’s set in a meteor crash site slash power plant base. The graphics look great and add to the hectic atmosphere that comes with firefight. What i enjoyed most is that i couldn’t even tell that this was not a Bungie made map. The level of detail in the level as well as how it plays make this a must play for those who enjoy firefight. Next on the list is Condemned. 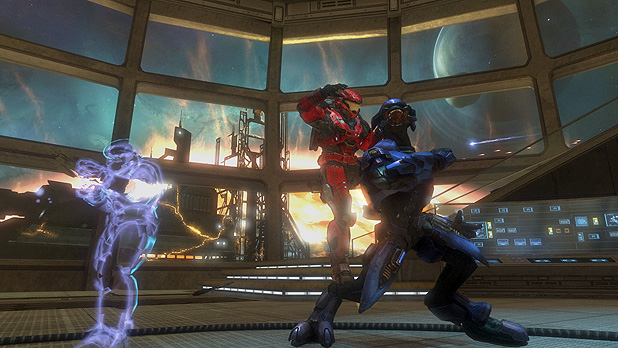 Condemned is a midsize map that supports Free for All in addition to Team Objective and Team Slayer. This battle takes place in a space station, which means plenty of close combat. There is a cool low gravity area that mostly becomes the central point of shootouts. Weapon placement is well done a la Bungie, nothing feels like it can be used in a cheap manner. This map also looks impressive but it plays a little different from the usual Halo map. Certain Affinity seemed to design the stage with multi level combat in mind. There are a lot of places you can get shot from. The map plays a little more hectic than what I’m used to but Certain Affinity, along with 343 Industries said that they wanted to bring their own twist to the maps. Overall very fun to play. Last but not least is Highlands. 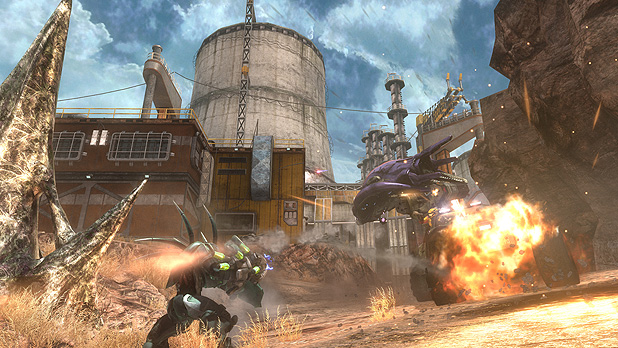 Highlands is my least favorite of the maps for two reasons. First the map somehow has a stunning skyline, but generic tree renders scattered across the map along with some dull looking rock textures. The map seemed like a graphical step down. I can’t put my finger on it, but it’s just not up to par. On the other hand, gameplay can be fun on the map once you adjust your approach. What I mean by this is that given Certain Affinity’s history in making Call of Duty maps as well, you can surely feel the influence. The influence is represented in the amount of camping spots the map has for snipers,making it at times frustrating. This is Halo Reach the most balanced fps to date. Let’s keep it that way and not have it play like some overrated piece of shit modern warfare shooter. That being said, there are warthogs, portals and ghost to help traverse the large map. It’s designed for big team and large objective games alike. All in all it’s growing on me but as an avid Halo fan I am still disappointed in this one map.

What’s Legit?
+That despite Bungie no longer being in charge of the franchise, we can still get multi player map packs that can keep us busy till the next Halo.

What’s Perpetrating?
-These MF’s were slipping when they approved Highlands into this map pack without making some improvements to the graphics and weapon placement. Let’s hope this is not a reflection of the level of quality we can expect for the future of the franchise.

If you are not a big Halo fan these maps can wait till they are at a discount. Reality is, you are only getting two maps and only one is truly up to par. Now if you’re a fan, then go ahead and spread that bread, because that firefight map alone will keep you busy.