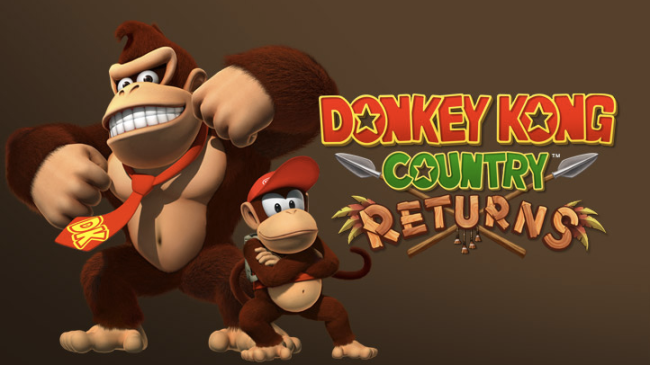 Donkey Kong Country has a special place in my legit life. DKC 1 was my very first video game. It’s on my top ten list of favorites. Safe to say, im going to be very critical of any wrong doing of this classic franchise. Now that Rare is too busy making avatar underwear to develop games, and is Microsoft’s property, someone else had to step in to continue the legacy. Enter Retro Studios. Retro is notorious for making the superb Metroid Prime Trilogy. Nintendo really put the DK in the right hands.

This game has a great blend of old meets new gameplay. Donkey Kong can ground pound when you shake the controller. When you do this, it will open up secrets. When holding down the D Pad and shaking the remote, DK can blow. This is useful for defeating enemies that have engulfed themselves in flames, or even blowing on flowers that may be hiding bananas inside. Both tactics are great for finding secrets. 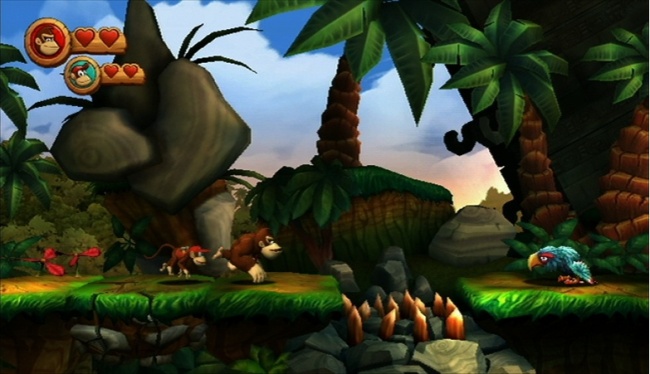 Just like the first three games, Returns is loaded with secrets. From collecting the K.O.N.G. letters, to jumping in the bonus barrels, DKCR has you covered. Bonus levels are just like you remembered, music and all. Even more gems in this game can be found due to puzzle pieces. With the puzzle pieces, you unlock Character artwork, music, etc. I cannot stress how hard it is to find them all. Even in the early stages of the game, it can be a true challenge.

Controls overall feel smooth and responsive as the SNES games, so when you play through these new levels, at adds more to the experience. Some levels contain Mine cart, rocket barrel, and Rhino riding levels. There’s even some levels that look like they came straight from the game LIMBO. You can really tell that a lot of hard work was put into every single world. Retro takes full advantage of the Wii’s strengths. No frame rate issues, always smooth gameplay, and overall it’s just a good-looking game. There are several spots in Returns that could pass as a next-gen title.

Boss battles are present. Just like the old days, once you learn the bosses patterns you can annihilate them. Also one feature I personally enjoy, when defeating a boss, you jump up to them and beat them down. Shake the controller as fast as you can and Donkey Kong will punch, kick, and even pimp slap the boss, sending him into oblivion. It’s all very rewarding, because of all the stuff the game throws at you to get to that point. This game is freaking hard. someone on the outside looking in will most likely think that this is a “kiddy” thing. I laugh at that person. Controllers will be thrown, kids will cry. Never fear Noobs, Retro brought in Super Kong. When you call in Super Kong, he will play the level for you. After that, the player could try going back and beating it the real way. 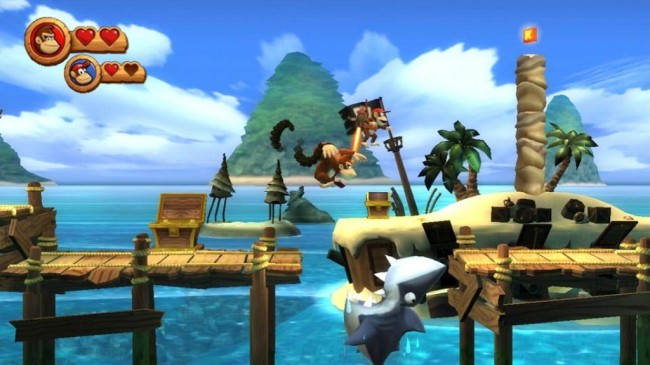 True to Nintendo fashion, the game offers no online coop. Honestly this game feels like such a complete package, when playing solo sometimes, I forgot there was any multiplayer at all. No DLC here, this is a finished game. Local 2 player is present though, but now it’s simultaneous. Diddy Kong has A gun that shoots enemies, and he’s very fast. The only downside is, only the second player can play as him. Coop is handled well and it’s too bad I cannot play with anyone other than the usual suspects. We need online Nintendo. Step it up.

To put it simple I love this game, DKC returns is jammed packed with content. Hidden levels, great visuals, amazing addictive gameplay, coop, everything. All of the superb music and sound effects I loved are here. This is Donkey Kong Country plain and simple. It’s been a long wait, but it was well worth it. My childhood memories are restored. Thank you Retro! Truly you guys are the new Rare.