It is hard to make good superhero game, or at least it used to be. What mostly messes them up is that they are based off movies. This game, luckily, is based on the comic book (ultimate Series). There is one thing about the gameplay that bugs me is that it’s too linear and repetitive. There are no side missions or objectives. It follows the story of Roxxon scientists trying to make a stronger venom virus, but of course they do something wrong and blow up the triskelion that held most of Spider-man’s biggest fans enemies (Sandman, Rhino, Electro, Dr Octopus, Venom, Green Goblin). Spider-man, being the superhero that he is, was in the area (or at least a quick swing away) when this went down. Armed with his fist, and the power to spin webs, it was now up to him to clean this mess up. Each level is filled with henchmen as you make your way to the bosses that escaped. There are areas where you can just skip the battles, but others are mandatory to keep advancing, that’s where it can get really annoying.

The story is pretty entertaining, but sometimes Spiderman’s corny jokes can get a bit annoying. It’s like a law for him, “For every action or boss beat down, there is a pun that will escape Spiderman’s mouth”. Although I have to admit some of them are pretty funny. It is a pretty big game, so you can waste a lot of time while playing. I don’t have the exact amount of time it took me to beat it, but I can estimate about 2-4 hours depending on how fast you play. More if you want to get all of the artwork and upgrades. 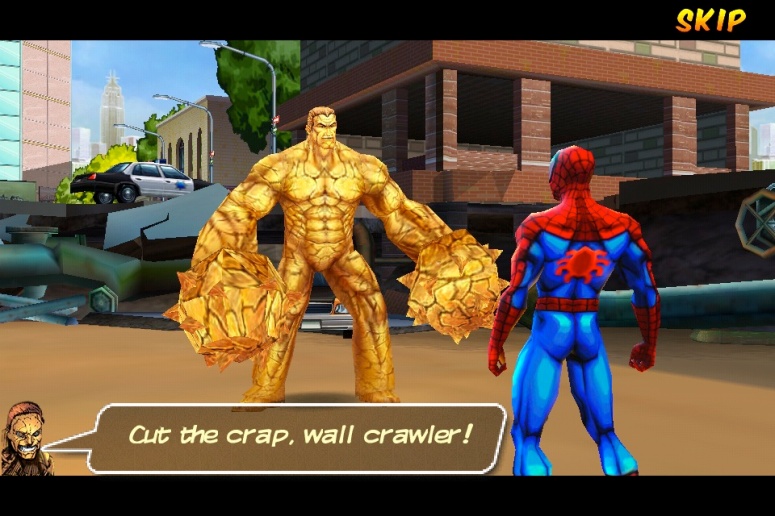 Controls are very easy to use, you really only have 3 buttons and a virtual joystick, pretty self-explanatory when you play. There are some action buttons that show up either when you are about to get attack, or when you need to dodge/complete some action in a fight.

Graphics are colorful and bright even with all the chaos going on in NY. It’s not one of the best 3D games I’ve seen in the app store, but it supports the retina display which helps everything pop a bit. Animations are smooth, it’s actually not as choppy as the video looks, and the video is just an experimental way of me playing the game without having my thumbs in the way. The background music fits the game; it has kind of suspenseful sound to keep you alert. The voice acting isn’t bad either, but I do not like Spiderman’s voice.

Overall I think it’s a good game for the amount of time it takes, there really isn’t much replay value in my opinion unless you want to collect all of the artwork or fully upgrade Spider-man. After you beat it the first time you do unlock the “Ultimate” difficulty which is pretty hard, the enemies attack more instead of just circling around you while you beat their pals. The main difference is that you take more damage. 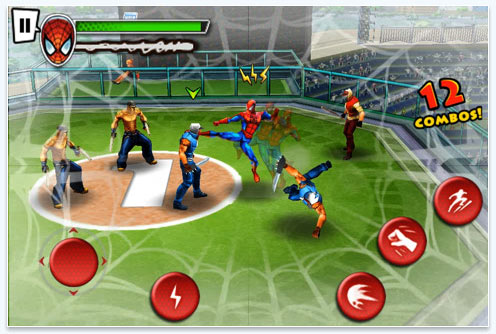 So if you like Spider-man, or superhero games in general, then I think you won’t mind dropping $6.99 to download this game, if you’re not much of a fan, then you could wait till it goes down in price or it goes on sale. Personally it’s the best Spider-man game I’ve played, but that’s cause I haven’t played that many, especially none of the recent ones, but it’s a good game, just gets repetitive beating people over and over again just so you can beat up the boss and get to the next part of the story. It is the best superhero game in the app store, and it provided some worthwhile entertainment.