I would like to start off by saying, This game is funny as hell. Twisted Pixel truly has a knack for comedy. In Comic Jumper, you play a hero who’s down in out. His comics book series has been cancelled, and he needs work. In order to keep paying his bills, Captain Smiley agrees to work for the Twisted Pixel company.

Each of the comics the captain visits, are all varied. Every comic world, has its own themes that the game makes fun of. The classic comic world makes fun of ignorance that used to exist. CJ does a great job of poking fun at the past, while not offending anyone in the same token. Also there’s a Manga stage, and a barbarian level reminiscent of Conan. There’s even a part where the captain reads fan mail. Kids used to send their favorite comic book characters mail all the time. Mail to a fictional character? yep.

Most of the time you will be shooting. Get used to it, you’ll be doing it a lot. The shooting does start to get old, but the witty dialog you hear while its happening keeps you in the game. Also the camera will shift at some points, giving you an angle on the action not unlike Sin and Punishment. At its core, this is an old school shooter.

Smiley’s star on his chest has a mind of its own. He’s a real smart ass. Rarely do they agree on things. in fact one of the bosses that’s trying to kill you, he actually admires. Star is a unique character, that never shuts up. Safe to say, the two of them make every level that much more fun to play. It’s so hard to review this game and not spoil anything, there’s just so many parts that are hilarious. CJ is flooded with Easter eggs, I really hope you find them.

A little hint, Call on Twisted pixel to help you in battle, the result is magnificent. With enemies defeated, you earn money. The money will allow you to upgrade. I recommend maxing out your weapons power, since you’ll be shooting 80 percent of the time. Any spare cash can be used to buy Concept art, extra videos, Gamer pics, themes, sound clips. For 15 bucks, this game makes sure its worth it all. You even can get more levels to use in Splosion’ Man, one of Twisted pixels earlier titles.

The Parts when you’re not shooting, Smiley puts his hands on people. The hand to hand combat is actually very well done. My problem is that, there’s not enough of it. I wish the game could have been 50/50 on the combat/shooting aspect. I will say CJ has a decent length to it. With the extra challenges and everything, it should take you 6 to 7 hours to finish. Some might even need five more hours, as this is a challenging game that has no difficulty adjustment.

Even though this is a single player game, I would invite some friends over, so they can hear and see this game. I’m thinking Twisted pixel should get this made into a show or something. Either way this is one of the most original games this year, and well worth your dollars.

Comic Jumper: The Adventures of Captain Smiley Gets

+Fantastic sense of Humor throughout the game.

-Could have used More hand to hand combat segments to keep the gameplay fresher.

-Difficulty will turn away some. 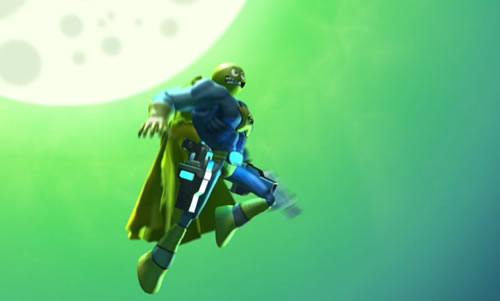 One thought on “Comic Jumper: The Adventures Of Captain Smiley Review”